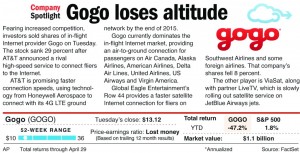 Solid earnings from a broad swath of U.S. companies pushed the stock market higher on Tuesday.

Ameriprise Financial, a wealth management company, surged after posting earnings that exceeded Wall Street’s expectations. The company also said it would buy back an additional $2.5 billion of its own stock and raise its dividend. Cummins, a maker of large diesel engines, jumped after the company said a surge in North American sales sent its earnings higher.

Just over half the companies in the Standard & Poor’s 500 index have now released their earnings for the first quarter and, with the occasional exception, the reports have contained enough good news to drive stock prices higher. The S&P 500 has gained 2.1 percent since April 14, and the index is approaching its all-time high following a pullback at the start of the month prompted by a sell-off in formerly high-flying internet and biotechnology stocks.

Cummins rose $5.61, or 3.9 percent, to $150.81 after the company posted its results and raised its sales outlook due to improving demand in North America.

Coach, a maker of handbags and other luxury goods, was among the day’s losers. The company’s stock fell $4.71, or 9.3 percent, to $45.71 after Coach said its earnings declined in the first three months of the year.

Investors get more information on the U.S. economy and the Federal Reserve’s thinking on Wednesday.

The Commerce Department will issue the first of three estimates of how fast the U.S. economy grew in the January-March quarter. Economists say a slowdown last quarte is likely giving way to stronger growth that should endure for the year.

The Fed will release a statement after the conclusion of their its two-day meeting. Most economists expect that the Fed will reduce its monthly bond purchases by another $10 billion.

The Fed’s stimulus has helped underpin a five-year rally in stocks.

• Sprint, the third-largest U.S. wireless carrier, gained 84 cents, or 11.3 percent, to $8.27 after the company posted a loss that was smaller than analysts’ expected.

This article appeared in print on page 38 of the April 30th, 2014 edition of Hamodia.