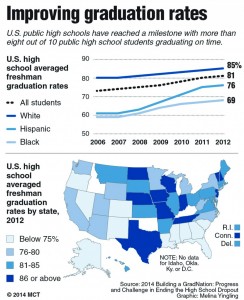 U.S. public high schools have reached a milestone, an 80 percent graduation rate. Yet that still means 1 of every 5 students walks away without a diploma.

Citing the progress, researchers are projecting a 90 percent national graduation rate by 2020.

Their report, based on Education Department statistics from 2012, was presented Monday at the Building a GradNation Summit.

The growth has been spurred by such factors as a greater awareness of the dropout problem and efforts by districts, states and the federal government to include graduation rates in accountability measures. Among the initiatives are closing “dropout factory” schools.

In addition, schools are taking aggressive action, such as hiring intervention specialists who work with students one on one, to keep teenagers in class, researchers said.

Growth in rates among African-American and Hispanic students helped fuel the gains. Most of the growth has occurred since 2006 after decades of stagnation.

Education Secretary Arne Duncan said at the summit that the country owes a debt of gratitude to teachers, students and families whose hard work helped the country reach the 80 percent mark, but he said those students who drop out have a “bleak” future and shouldn’t be forgotten.

This article appeared in print on page 3 of the April 29th, 2014 edition of Hamodia.