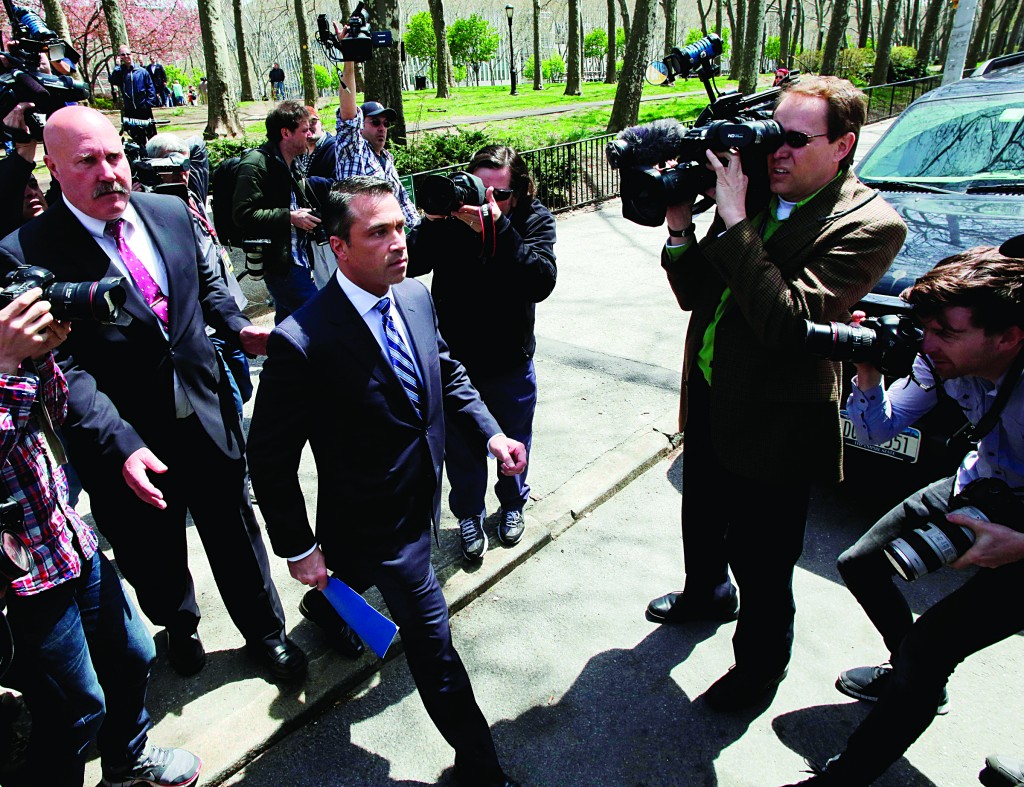 Rep. Michael Grimm, a former Marine and FBI agent who’s been the target a campaign-finance investigation, was instead charged on Monday with evading taxes by concealing more than $1 million in sales and wages while running a small Manhattan restaurant — a case he called a political witch hunt meant to drive him out of office.

Grimm surrendered to FBI agents early Monday and pleaded not guilty in Brooklyn federal court to mail, wire and tax fraud
charges and was released on $400,000 bond secured by his Staten Island home.

The Republican lawmaker, using a World War II memorial across the street from the courthouse as a backdrop, later accused prosecutors of leaking “all kinds of innuendos and accusations to support a political witch hunt” intended to “assassinate my character.” He vowed to return to work in Congress while fighting the charges.

“I know I’m a moral man, a man of integrity,” he added. “And I also know I have a lot more service and leadership to provide this country, and that’s exactly what I intend to do.”

U.S. Attorney Loretta Lynch said investigators uncovered the restaurant fraud as they conducted the two-year in the running campaign finance probe. She denied the prosecution was politically motivated and suggested more charges were possible.

“We follow the evidence and see where it goes. … The investigation is broader and ongoing,” she said.

The 20-count indictment alleges the tax fraud began in 2007 after Grimm retired from the FBI and began investing in an Upper East Side eatery called Healthalicious. It accused him of trying to evade payroll, income and sales taxes by paying his workers — some of them illegals — in cash.

Grimm left the business in 2010, the same year he won his first term in Congress.

Grimm’s legal troubles, while embarrassing to his fellow Republicans, were unlikely to determine the balance of power in the House. Republicans hold the majority by a margin of 233 to 199 seats, and are widely expected to keep control after November’s midterm elections.

Grimm’s Democratic opponent, former City Councilman Domenic Recchia, has been hammering him over ethics although he has yet to gain traction.

News of the charges drew a mixed reaction from constituents.

“This is supposed to be someone who respects the law and that’s certainly in question at this point,” said Marc Patrick, 57, a retired teacher.

However, Eddie Garcia, 70, said he had voted for Grimm and credited the congressman with helping Staten Island recover from Superstorm Sandy.

Grimm is being prosecuted “because he is a rising star in the Republican Party,” he said. “They think they got him. I hope justice will prevail.”