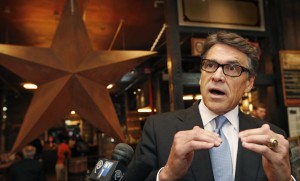 In New York to poach entrepreneurs for his state, Texas Gov. Rick Perry is countering Gov. Andrew Cuomo’s latest initiative to lure businesses from out of state with a renewed bid to snag jobs from New York, a tactic he has tried from coast to coast.

He said it’s good for states to face economic competition from each other because it pushes them to be better.

“Business men and women in New York know instinctively that they are taxed too much, the regulatory climate is too onerous,” Perry said during a radio interview with Fred Dicker on Tuesday.

Perry said he’d like to debate Cuomo, a Democrat, over economic policies.

“I’d be more than happy to sit down and have a thoughtful conversation, a debate with Gov. Cuomo over the issues that face us as a state and talk about the economic policies and compare New York to Texas,” Perry said.

Cuomo’s $100 million Start-Up NY initiative, which allows businesses that locate near college campuses to operate tax-free for 10 years, is being touted in commercials playing in Texas. Texas has also bought promotional airtime in New York.

While Perry praised Cuomo for the initiative and his advocacy for charter schools, he managed to throw some jabs as well.

Last week, the Washington-based Tax Foundation announced that changes in New York tax policy mean the state’s ranking will improve from last to 48th nationally, a development Perry sniped at.

“That’s kind of small ball but the fact is, there was only one direction you could go in New York,” Perry said.

This article appeared in print on page 12 of the April 24th, 2014 edition of Hamodia.