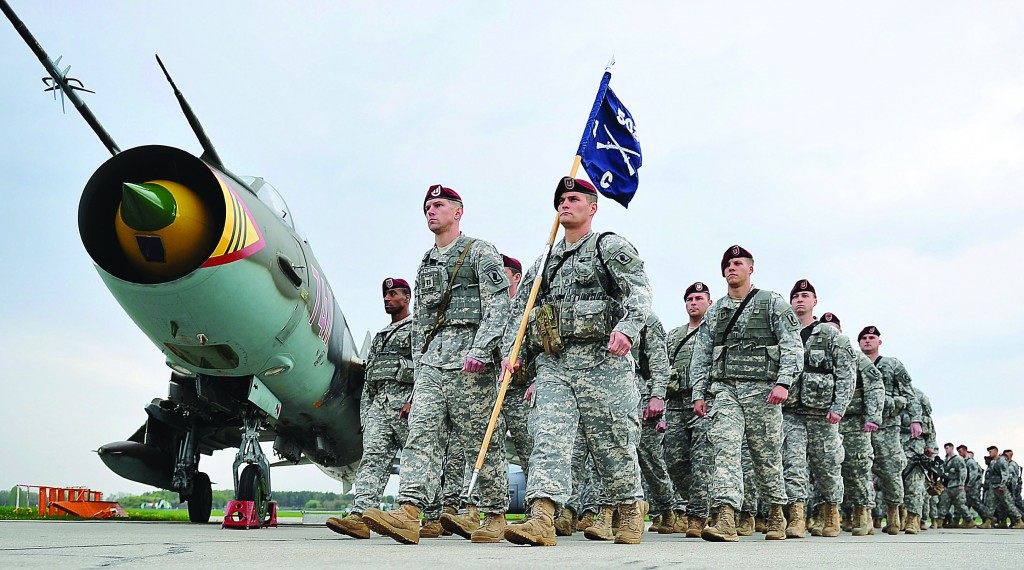 Russian Foreign Minister Sergei Lavrov on Wednesday accused the United States of orchestrating the Ukraine crisis for geopolitical gain and warned that Russia will “certainly respond” if its interests in Ukraine are attacked.

In an interview with state-run Russia Today, Lavrov linked Vice President Joe Biden’s visit to Kiev on Tuesday to the Ukrainian government’s resumption of efforts to oust pro-Russia gunmen holding police stations and government buildings in a dozen towns and cities in eastern Ukraine.

The “anti-terrorist operation” launched by the interim government in Kiev last week was suspended over the the weekend to allow the armed factions occupying key government facilities to consider an offer of amnesty to those who lay down their arms and surrender the seized buildings.

None of the occupations has ceased, despite an agreement reached in Geneva last week obliging Russia to use its influence with the armed factions.

Acting Ukrainian President Oleksandr Turchynov announced Wednesday that the Ukrainian military operations to recover the occupied facilities had resumed. The announcement followed the discovery of two bodies believed to be victims of torture and killing by the pro-Russia gunmen holding Slovyansk. One of the dead was reported to be a Slovyansk city official loyal to the Ukrainian government who was last seen being roughed up by the occupying gunmen.

Kiev officials as well as U.S. and European leaders have accused Moscow of instigating the armed confrontations in eastern Ukraine, where some of the gunmen wear Russian military uniforms and carry Russian army-issued rifles.

“It’s quite telling that they chose the moment of the vice president of the United States’ visit to announce the resumption of this operation,” Lavrov said. He also noted that the moves against the militants aligned with Russia began “immediately after (CIA Director) John Brennan’s visit to Kiev” the previous week.

Lavrov referred to the Kiev government as “coup-appointed” and described Turchynov’s order for resumption of the mission to liberate the seized eastern facilities as “a criminal act” being waged at the direction of Washington.

“There is no reason not to believe that the Americans are running the show,” Lavrov said of the unrest that has beset Ukraine since November, when protesters took to the streets of Kiev and other major cities in western Ukraine in anger at former President Viktor Yanukovich’s decision to abandon an economic alliance pact with the European Union.

The protests escalated into a three-month rebellion against Yanukovich, who eventually fled Kiev in late February and took refuge in Russia. The Kremlin has refused to recognize the current interim government as legitimate or authorized to make decisions for the country.

Lavrov cast the confrontations in eastern Ukraine as a similar challenge to Russian security as in the brief 2008 war with Georgia over its breakaway South Ossetia region. Russian forces invaded South Ossetia after Georgia sent troops to regain control of territory occupied by pro-Russia rebels.

“Russian citizens being attacked is an attack against the Russian Federation,” Lavrov warned in the interview. “If we are attacked, we would certainly respond. If our interests, our legitimate interests, the interests of Russians have been attacked directly, like they were in South Ossetia for example, I do not see any other way but to respond in accordance with international law.”