Community I Won Because I Lost
Community 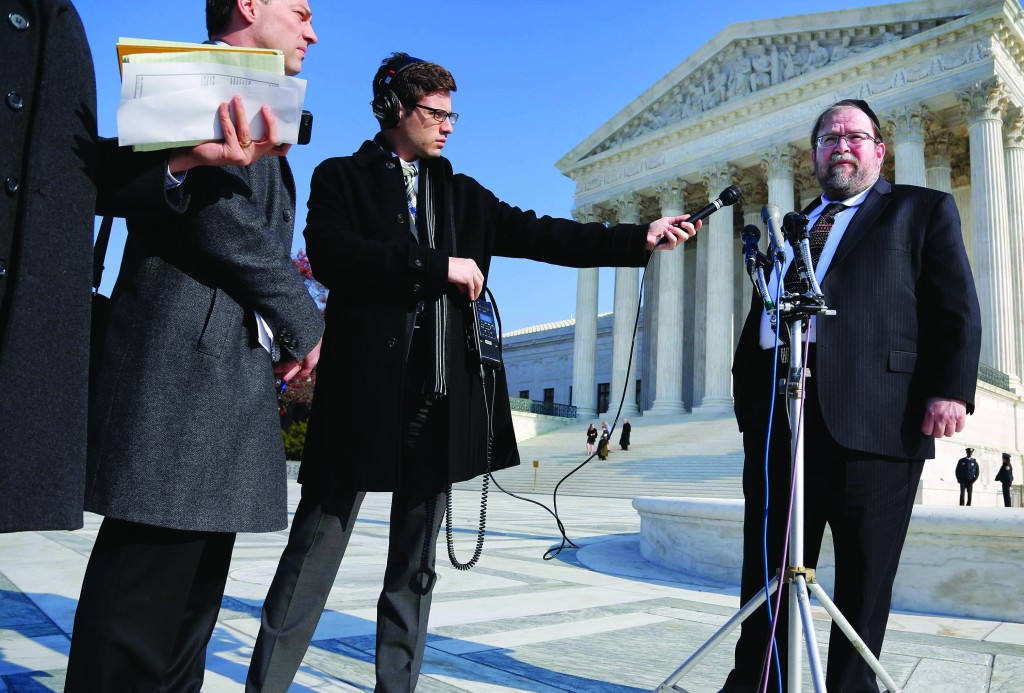 Any schoolchild will confidently tell you that everything that happens is designed and carried out by Hakadosh Baruch Hu, that nothing in our lives, not the slightest breath of air or step on the pavement, is arbitrary or meaningless. They learn this hashkafah from a very early age and can proudly point out the countless tovos they have experienced and lessons they have learned in their short lives.

The pure certainty of our children in Hashem’s running of the world teaches us wizened adults to re-examine the seemingly normal and haphazard events of our lives and learn from every experience. Hashem arranges people, places and things so that every individual can achieve his unique mission in life through the prism of Torah and mitzvos.

The process of standing in front of the Supreme Court of the United States of America and awaiting their verdict was a once-in-a-lifetime encounter. It demands reflection and publication to share the messages that Hashem so clearly set before me in order to teach me a lesson and help Klal Yisrael.

For years, my family and I had been traveling extensively on Northwest Airlines (now merged with Delta). As one news reporter stated, I spent more time in the air than on the ground. As a result, I earned the highest frequent-flyer status and received hundreds of thousands of miles, granting me occasional free flights, special in-flight service and other privileges.

In 2008, due to alleged contract negotiations between Northwest and their baggage handlers, baggage arrival wait times became unusually long. Within a seven-month period, after waiting for hours to receive my luggage, I filed numerous complaints with the airline. I submitted these complaints by phone, cordially and respectfully, to Northwest’s dedicated customer service representatives.

Annoyed that the airlines could do whatever they wanted to dedicated consumers when basic reasoning insisted otherwise, I filed a suit against Northwest for breach of the contract of frequent flyers and of the covenant of good faith and fairness between the consumer and the airline.

The district court heard my case and dismissed it on the basis of the Carter-era Airline Deregulation Act (ADA), which ceded to the airlines exclusive jurisdiction over price, route and service, barring government interference except in matters of security, traffic control, or civil business. The court ruled that revoking my frequent-flyer status fell under the rubric of price and service and was thus in the airline’s control.

I filed for appeal with the United States Court of Appeals for the Ninth Circuit, known for its consumer-friendly attitude and disdain for large, money-hungry corporations. The judges on two levels of the Appellate Court unanimously agreed to reverse the district court’s decision, citing breach of good faith and demanding that the district court actually hear the case.

The ruling of the Ninth Circuit would have been a blow to the airlines. It would have revolutionized the relationship between airlines and customers in favor of the customers, requiring the airlines to spend money, time, and manpower enhancing their customer service. Obviously unsatisfied with this ruling, Northwest appealed to the only court higher than the Ninth Circuit: the Supreme Court. Realizing the effect of the Ninth Circuit’s ruling on the American people, the Supreme Court agreed to hear Northwest’s case. Former Solicitor General Paul Clement represented Northwest Airlines, and the formidable Adina Rosenbaum, member of the Public Citizens Litigation Group, represented me.

A case heard by the Supreme Court consists of a lot of paperwork and a single hour of time in front of the judges, in which both sides explain their positions, present their documentation and answer numerous questions from any of the nine justices. After hearing the case, the Supreme Court can take between two and three months to reach a decision. They deliver their various verdicts on most Tuesdays and Wednesdays at 10:00 a.m., with no advance warning to the parties involved.

Every Tuesday and Wednesday between the hearing in December and the announcement of the verdict, I wondered if the moment of decision had arrived.

On Wednesday, April 2, 2014, I was teaching a seminary class at 10:03 when my cell phone vibrated. It was my attorney, Ms. Rosenbaum. Though I usually do not interrupt lessons for personal calls, with the class’s permission, I picked up the phone—and learned that the Supreme Court had unanimously decided to overturn the decision of the Ninth Circuit, ruling in favor of Northwest Airlines as per the ADA.

When I hung up, my students were shocked to see that I had no negative reaction, that I wasn’t angry or frustrated or even sad. It was clear to me that the decision was Yad Hashem and that my life was orchestrated by Him for my benefit. With the past few decades of my life spent learning, teaching, and reviewing the words of the Nesivos Shalom, it wasn’t difficult for me to see that everything that happens to me is a result of my unique mission and serves as a springboard for my avodas Hashem.

I was shocked that people can learn over and over again to accept what Hashem gives them and to search for the hashgachah in every moment, yet when a test of character arrives, the practical application of their emunah evaporates!

When the principal of a school in Brooklyn told me that he was sorry I lost the case, I answered, “I won because I lost!” By losing the case, I won the tremendous opportunity to practice a higher level of emunah than I would have experienced in my daily life.

Over the course of the next week, I received numerous messages, emails, and words of “condolence.” The ridiculousness of the word “condolence,” used for death, was not in the least applicable in my case and served only to put a new perspective on my situation.

One tremendous lesson I learned was that one matter can be seen in two completely opposite lights, and that both can be correct! The experienced judges of the Ninth Circuit are often just one step away from the Supreme Court itself, yet they unanimously came to the opposite conclusion of the Supreme Court justices.

When it comes to Torah, there are countless occasions when one Rav’s opinion diametrically opposes another’s, each with large followings. Each Rav questions the interpretation of the other. Yet “elu v’elu divrei Elokim Chaim!” Two opposing sides of one principle can both be correct, depending on the different interpretations, understandings, and situations of the parties involved. Both are daas Torah and both are true, and every individual must follow the teachings and guidance of his own Rabbanim.

The most common comment that I received from people about my involvement with this case was, “How dare you make such a chillul Hashem! Don’t you know how negative it makes Jews seem, always kvetching and running after money?” These people are short-sighted and bigoted, jumping to a conclusion before they know all of the facts and have analyzed the whole situation.

First of all, at every step of my journey, I consulted daas Torah in order to receive the Torah’s opinion on my individual situation. My Rav deemed everything I did appropriate and acceptable.

Second of all, the same passuk that gives us the negative commandment of not creating a chillul Hashem also commands us to make a kiddush Hashem. If you focus only on the negative press, then yes, people might view me as a money-hungry kvetch. If you are willing to see the positive, think about the millions of people who are reading about the case and thinking, “Wow, here is someone brave enough to take on the mighty kingdom of corporations to benefit us consumers. Only a Jew would have that kind of temerity and would be willing to risk his name and time to help the American people.”

And, as trite as it sounds, don’t believe everything you read. While the press had some very positive things to say about the steps I took, it is unfortunate to see negative statements that followed me and my series of trials, the majority of which were insults and accusations that were based on faulty or missing information. For example, “Ginsberg lodged dozens of complaints in a seven-month period.” The airline failed to mention that each complaint was lodged politely and calmly, after the airline requested feedback about their service. It also ignored the fact that in the years previous to this seven-month period, I had barely ever complained! Furthermore, it was rare to see a media outlet mention the dozens of positive comments and feedback that I had sent the airline.

Also, do not pass judgments on other people until you have gathered ALL the facts. Even then, discussing your opinion of another person’s actions often falls under the category of lashon hara (if he happened to get his facts correct), or motzoei sheim ra (when, as more often happens, he doesn’t).

Finally, it is always worthwhile to settle disputes as early and simply as possible. The Beis Hamikdash was destroyed because of needless disputes and the hatred that they bred, and today, families, friends and dynasties are torn apart because of unresolved mistakes or negative actions. Each side insists that it is right, refusing to hear the other side or to risk being proven wrong.

Why cause years of agony and pain for the price of pride? By admitting you are wrong, you can make peace before the dispute advances to a place where ending the battle would take superhuman effort.

As a whole, Klal Yisrael is on the cusp of redemption, but we will not make it over the edge if we cannot internalize the messages that Hashem sends us on a daily basis. Every day, every moment, peel back the layers of routine and see the dovrei Elokim in every situation. When this happens, we will be able to greet Moshiach proudly and fly to Eretz Yisrael—for free, of course.