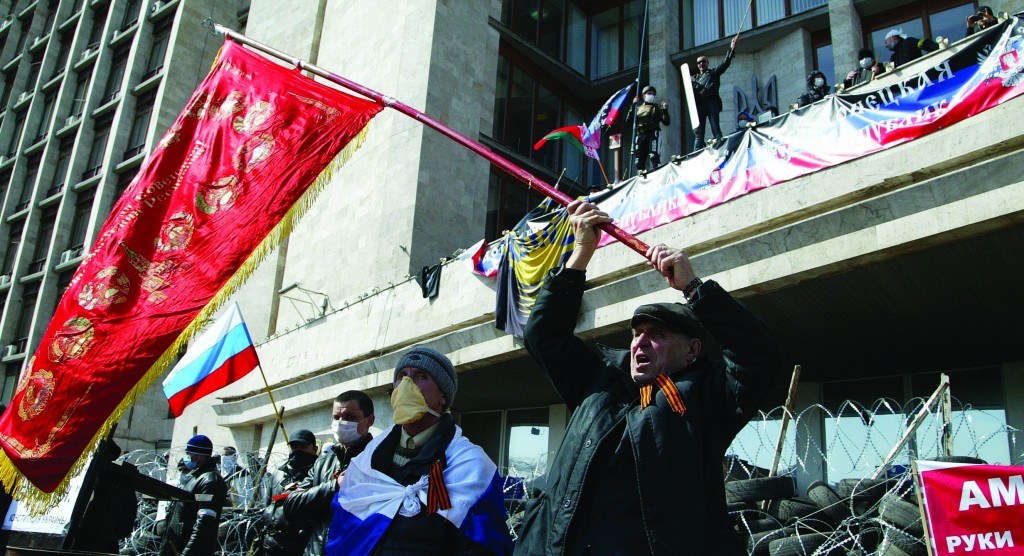 Pro-Russian activists barricaded inside a government building in eastern Ukraine proclaimed the region independent Monday and called for a referendum on seceding from Ukraine — an ominous echo of the events that led to Russia’s annexation of Crimea.

The Ukrainian government accused Russia of stirring up the unrest and vowed to quell it. Russia, which has tens of thousands of troops massed along the border, warned Ukraine of more “difficulties and crises” if its leaders fail to heed Moscow’s demands.

In Washington, the U.S. said any move by Russia into eastern Ukraine would be a “very serious escalation” that could bring further sanctions. White House spokesman Jay Carney said there was strong evidence that some of the pro-Russian protesters in Ukraine were paid and were not local residents.

At the same time, the U.S. announced that Secretary of State John Kerry will meet with top diplomats from Russia, Ukraine and the European Union in a new push to ease tensions. The meeting, the first such four-way talks since the crisis erupted, will take place in the next 10 days, the State Department said.

Pro-Russian activists who seized the provincial administrative building in the city of Donetsk over the weekend announced the formation Monday of the independent Donetsk People’s Republic.

They also called for a referendum on the secession of the Donetsk region, which borders Russia, to be held no later than May 11, according to the Russian news agency Interfax.

A similar action was taken in another Russian-speaking city in the east, Kharkiv, where pro-Moscow activists declared themselves “alternative” regional legislators and proclaimed a “sovereign Kharkiv People’s Republic,” Interfax reported.

Russia annexed Crimea last month, following a referendum called just two weeks after the Black Sea peninsula had been overtaken by Russian forces. Ukraine and the West have rejected the vote and the annexation as illegal.

The activists who occupied the government building in Donetsk blocked off the entrance with 6-foot barricades of car tires lined with razor wire. 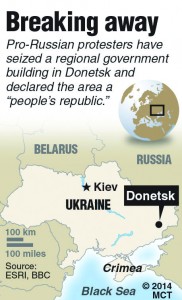 Ukrainian Prime Minister Arseniy Yatsenyuk accused Russia of fomenting the unrest to create a pretext for sending troops in and taking another piece of Ukraine.

“The plan is to destabilize the situation. The plan is for foreign troops to cross the border and seize the country’s territory, which we will not allow,” he said, adding that those taking part in the unrest had distinct Russian accents.