ANALYSIS: US Finally Regains the Jobs Lost in the Recession 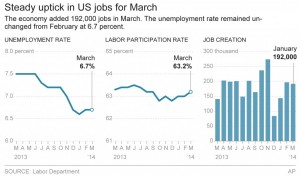 The U.S. economy has reached a milestone: It has finally regained all the private-sector jobs it lost during the Great Recession.

Yet it took a painfully slow six years, and unemployment remains stubbornly high at 6.7 percent.

The comeback figures were contained in a government report Friday that showed a solid if unspectacular month of job growth in March.

Businesses and nonprofits shed 8.8 million jobs during the 2007-09 recession; they have since hired 8.9 million. But because the population has grown since the big downturn, the economy is still millions of jobs short of where it should be by now.

Also, government jobs are still 535,000 below the level they were at when the recession began in December 2007. That’s why the overall economy still has 422,000 fewer jobs than it did then.

As a result, most analysts were hardly celebrating the milestone.

“The potential labor force is growing all the time, so the private sector should have added millions of jobs over the last six-plus years,” she said.

U.S. employers did add a seasonally adjusted 192,000 jobs in March, just below February’s 197,000, which was revised higher. March’s figure nearly matched last year’s average monthly gain, suggesting that the economy has recovered from the hiring slowdown caused by severe weather in December and January.

“We’re seeing sustained improvement,” said Scott Anderson, chief economist at Bank of the West. “But we’re not really that much stronger than we were last year. And we need more improvement for a stronger economy to come into fruition.”

The March figures did signal that stronger gains could lie ahead: More Americans without jobs are starting to look for one, and paychecks are growing.

Most economists expect job growth to pick up a bit, to a monthly pace of 225,000 or more. One reason: Americans have reduced their debts and benefited from rising home prices and a rising stock market. Better household finances should translate into more spending.

And a major drag on growth — federal spending cuts and tax increases — will fade this year, most likely boosting the economy. Budget battles and government shutdowns that have eroded business and consumer confidence since the recession ended are unlikely this year.

“Enough repair has happened in damaged sectors and there’s enough calm … so we can have a real recovery,” said Ethan Harris, global economist at Bank of America Merrill Lynch.

Greater business confidence has been good for companies such as Advanced Technology Services, a Peoria, Ill.-based firm that maintains machine tools, robotics and computer systems for industrial companies such as Caterpillar, Honeywell and Honda.

The company has about 120 openings for factory floor technicians, network engineers and information technology professionals. It has 2,700 employees in the U.S. and 300 more in Mexico and Britain.

Jeff Owens, president of ATS, said his clients appear more confident about economic growth and more willing to invest in machinery. He is seeing solid growth in the auto, food-processing and oil-and-gas-drilling-equipment industries.

“The economy is better than it was a year or two ago,” Owens said. “We’re seeing that people are more comfortable with executing their strategic plans.”

The U.S. unemployment rate has been stuck at 6.7 percent since December, but that partly reflects a positive trend: More Americans, particularly younger people, are either working or looking for work.

So far this year, about 1.3 million people have started looking for jobs, and most have found them. Last year, by contrast, the number of people either working or looking for work had shrunk by roughly 500,000.

That’s a welcome change from the pattern that had prevailed since the recession: The proportion of Americans working or looking for work fell to a 35-year low in December. Many of the unemployed had become discouraged and stopped hunting for jobs.

In addition, many younger people stayed in school to avoid the job market. And some older Americans probably retired earlier than they would have otherwise.

For most of the past four years, the number of Americans who found jobs barely kept up with population growth. Now, it’s growing slightly faster. As a result, the percentage of Americans 16 or older who were working reached 58.9 percent in March — the highest point since 2009.

More hiring plus a longer workweek means bigger paychecks for more Americans. That should help fuel more consumer spending and economic growth in the months ahead.

One thing holding back overall pay is the quality of jobs. Most of those added last month were in low-paying industries.

Higher-paying positions didn’t fare as well. Manufacturers shed 1,000 jobs, the first such drop since July. And professional and technical services, which include accountants, engineers and information technology workers, added just 10,400.

Freezing cold and heavy snowstorms this winter closed factories, slowed home sales and kept consumers away from shopping malls. As a result, many economists expect growth slowed to a 1.5 percent to 2 percent annual rate in the first three months of the year, from 2.6 percent in the fourth quarter.

But steady hiring, greater business and consumer confidence, and fewer government spending cuts should accelerate growth to about 3 percent for the rest of this year.