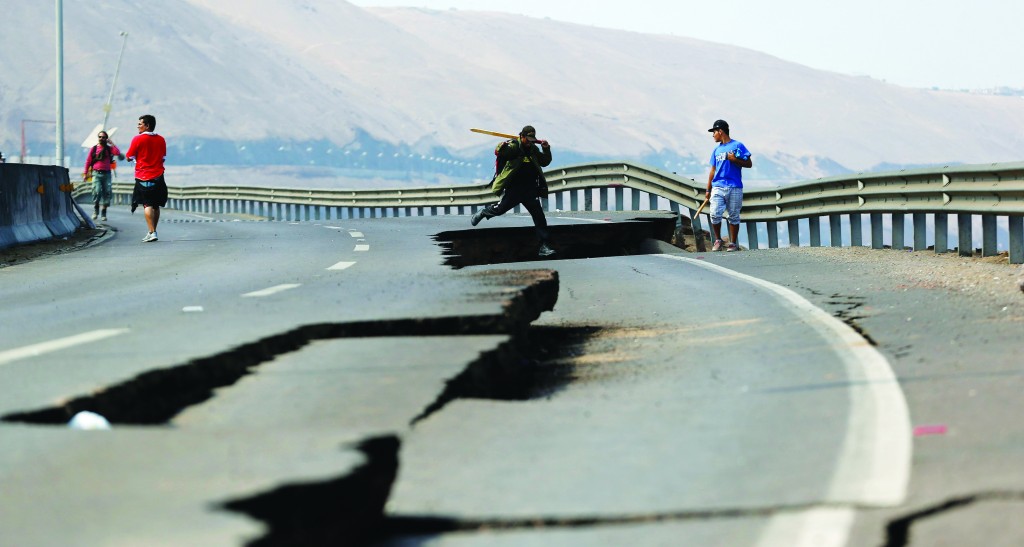 As the aftershocks from a massive 8.2 magnitude quake that rattled northern Chile entered a third day on Thursday, basic services were still out in the port city nearest the epicenter and residents fearful of tsunamis were fleeing into the hills.

The quake on Tuesday was blamed for six deaths and residents have been hit by dozens of aftershocks, including a powerful 7.6 magnitude quake on Wednesday night. Both quakes triggered tsunami warnings and evacuations.

More than 2,600 homes have been damaged and fishing boats were smashed up along the coast.

Chile’s arid, mineral-rich north is sparsely populated, with most of the population concentrated in the coastal cities of Iquique and Arica, near the Peruvian border and closest to the epicenters of this week’s quakes.

Iquique is a major copper exporting port and usually bustling commercial town with a duty free zone that attracts goods and merchants from around the world. The brightly colored housing of its historic center and beaches are popular with tourists.

On Thursday the city was almost completely paralyzed, its stores shuttered except for a few kiosks and supermarkets selling basic provisions. 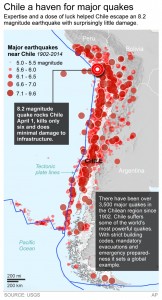 Many residents are abandoning Iquique entirely for the time being, heading to other homes or friends and relatives in the nearby town of Alto Hospicio, a tsunami-proof 600 meters (2,000 feet) above sea level.

But there’s a problem. The steep road running the 10 km (6.2 miles) or so from Iquique to Alto Hospicio is closed to transport, its surface cracked apart by Tuesday’s quake.

So people are walking up; clothing, appliances, strollers and all.

“We’re all walking up without water. I’m not afraid for me, but for my family, my son,” said 26-year-old Camilo Fuenzalida, carrying suitcases.

Iquique, an important port for freight travelling between Asia and South America, is shut for now. Even when ships are allowed to resume docking, it may struggle with a labor shortage, as many of its workers are holed up in Alto Hospicio, the port head told Reuters on Thursday.

Those who have stayed in Iquique are trying to get their lives back together. Electricity and water remain cut off to many places, reconnection complicated by the constant aftershocks.

“We’re living in a very abnormal situation,” said 63-year-old Iquique resident Freddy Hurtado. “There are problems of supply in basic services such as electricity and drinking water does not exist.”

“There are about 50 aftershocks every hour … Some aftershocks are pretty strong, you can feel them — 4.5, 4.6. That gives you an idea of the uncertainty that we are living through.”

Some people lined up in the warm autumn sunshine on Thursday to buy food, gas, water and other provisions from the few places open and fishermen dragged boats back to harbor.

Soldiers guarded gas stations and supermarkets to prevent looting. Nearly 300 prisoners took advantage of Tuesday’s quake and evacuation to escape, although many later handed themselves in again and the streets have been largely peaceful.

The area was well prepared for the quake after a recent spate of tremors.

The government regularly carries out drills and Chile’s emergency service Onemi has tightened up its response plan since a devastating 8.8 magnitude earthquake and tsunami in 2010 killed over 500 people.