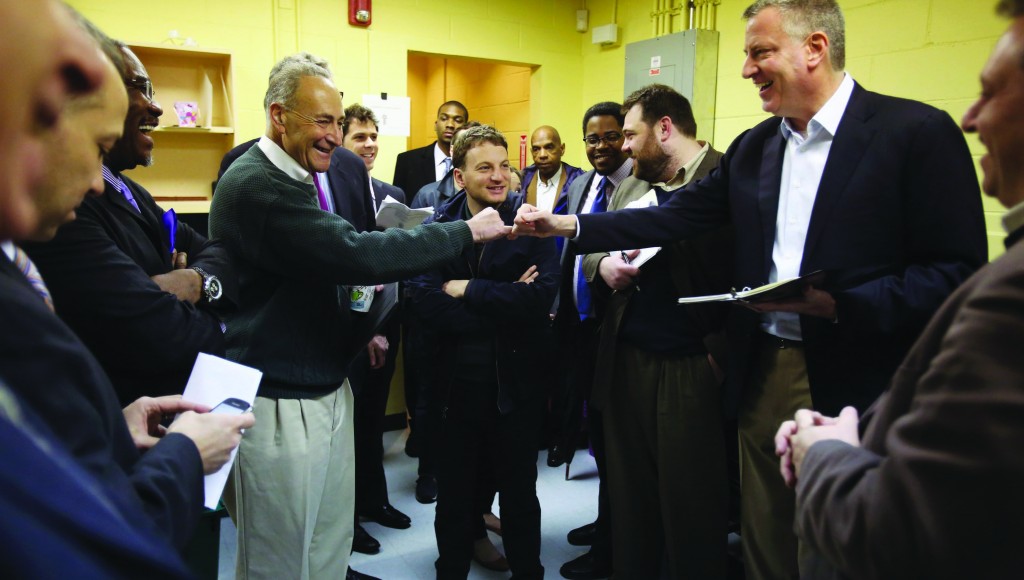 Now that state lawmakers have closed a budget deal to fund pre-kindergarten in New York City, Mayor Bill de Blasio is ready to turn to the next items on his sweeping liberal agenda: massively expanding affordable housing, increasing wages for the working class and overhauling the city’s recovery from Superstorm Sandy.

De Blasio’s road ahead, confirmed by the mayor and his senior aides, is an attempt to tighten the focus around his campaign theme of combating income inequality and to steady an administration that has seen its poll numbers shrink in the first 100 days, thanks to a series of unforeseen errors and grueling battles with Albany.

“We’ve got a very full plate,” the Democratic mayor said this past week. “All of it comes back to the core emotion of helping people in need, of trying to help people get back on their feet and trying to address the inequalities of the city.”

De Blasio can claim only partial victory on pre-kindergarten after his signature pledge to tax the city’s rich to pay for it was thwarted by Democratic Gov. Andrew Cuomo, who made state funds available instead. Some felt he was making a sport of one-upping the mayor.

But advisers to de Blasio believe that the skirmishes will be forgotten once pre-K starts in the fall and that voters will be happy with the program and will have forgotten about the failed tax by the time he faces re-election in 2017. Moreover, the mayorallies believe he has a growing sense of momentum on the heels of other successes, including expanding the city’s paid sick-leave law and ending litigation around stop-and-frisk.

Next up is de Blasio’s attempt to push back on the soaring rents that are increasingly making New York City out of reach to all but the very wealthy. His goal, oft-repeated in the mayoral campaign, is to build or preserve 200,000 affordable units of housing over the next 10 years for lower-income New Yorkers, a staggering number that would house a population bigger than cities such as Atlanta or Minneapolis. The lofty goal would also exceed the output of a pair of New York mayors who served three terms: Ed Koch produced 190,000 units over 13 years while de Blasio’s predecessor, Michael Bloomberg, created or saved 165,000 units over 12 years.

De Blasio’s approach, which is expected to be fully unveiled in May, will be multi-faceted, according to his advisers.

He has no plans to build stand-alone structures like public housing developments, but wants to find ways to cram more affordable housing units inside existing private buildings or ones that are on the drawing board.

He has no objection to super-sized developments, a concept that seemingly flies in the face of his image as a leftist who hails from a Brooklyn neighborhood known for low-rise buildings and liberal politics.

“I hope people hear me loud and clear that the only way I can achieve my goals is if we are building and building aggressively,” de Blasio said last month, saying he possessed a “willingness to use height and density to the maximum feasible extent.”

De Blasio has vowed to pursue a policy of largely mandatory inclusionary zoning, which would require developers to set aside a portion of a building’s units for poor and middle-class New Yorkers in exchange for authorization to build bigger and taller structures. Bloomberg only encouraged, but did not require, such measures.

De Blasio has also revisited some existing deals and has asked developers to add more housing. City officials point to the recent $1.5 billion waterfront redevelopment of the Domino Sugar refinery in Williamsburg, Brooklyn, as a model of de Blasio’s approach.

Originally, only 660 of the 2,300 units slated to be built would be affordable apartments, but in a deal struck this month, that number was increased to 700, with more of those being configured in two- or three-bedroom layouts, which are more conducive to families. In exchange, the towers will be allowed to grow by 20 stories.

The real estate industry, perhaps the most potent in the city, largely did not support de Blasio’s campaign for fear his tax-the-rich mantra would hurt their bottom line. Developers have not rushed to support him since taking office but have signaled some willingness to compromise.

“He won’t be their friend like Bloomberg,” said Heath Brown, politics professor at Seton Hall University, “but you can’t be mayor without working with developers, and they’ll need him, too.”

Alex Schwartz, an urban policy professor at The New School, said de Blasio’s push was “less of a plan and more of an assemblage of projects,” which is typical of the approaches of big-city mayors contending with limited resources. He added that de Blasio’s proposals were “not particularly new” but ambitious and “not impossible” to accomplish.