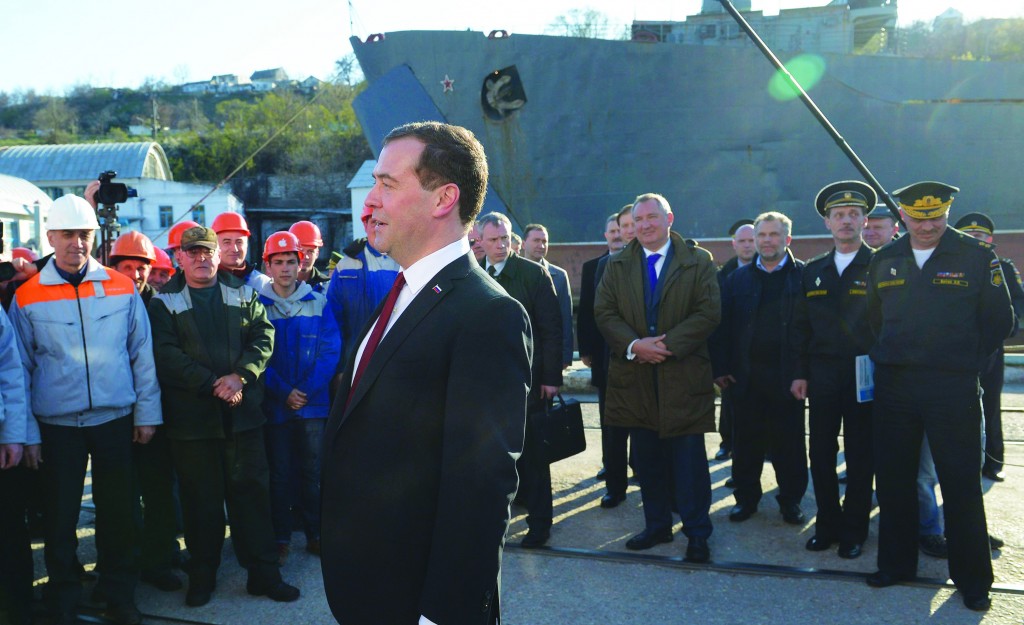 Prime Minister Dmitry Medvedev flaunted Russia’s grip on Crimea by flying to the region and holding a government meeting there on Monday, angering Ukraine and defying Western demands to hand the peninsula back to Kiev.

But in a gesture that could ease tension, Russia pulled some troops back from near Ukraine’s eastern frontier — a move which the United States said would be a positive sign if it is confirmed as a withdrawal.

However, Medvedev’s visit taunted Western leaders by underlining their inability to force Putin to relinquish Crimea, seized after the overthrow of  Ukrainian President Viktor Yanukovich and formally annexed on March 21.

Accompanying Medvedev, outspoken Deputy Prime Minister Dmitry Rogozin — who has been targeted by Western sanctions — left no doubt about the symbolism of the trip, saying online: “Crimea is ours. Basta!” (“enough”)

The Ukrainian government denounced the visit as a “crude violation” of the rules of diplomacy, a few hours after the latest round of crisis talks between Russia and the United States ended inconclusively.

In Washington, the White House reacted cautiously to the troop movements. “We’ve seen the reports and if they are true and if … they represent further withdrawals, that would be a positive sign,” said spokesman Jay Carney. “It is certainly something that we have explicitly called for.”

Putin and Merkel also discussed by phone ways of stabilizing Ukraine and another former Soviet republic, Moldova. A Kremlin statement quoted Putin as calling for a comprehensive solution that would end what he called a “blockade” of Moldova’s breakaway region Transdniestria.

Soon after Medvedev landed with cabinet members in Crimea’s main city Simferopol, he held a government meeting on moves to revive the region’s economy, including by creating a special economic zone to ease tax and customs duties.

“Our aim is to make the peninsula as attractive as possible to investors, so that it can generate sufficient income for its own development,” he said in a meeting that included Crimean leaders and was broadcast live. In comments that made clear Russia has no plans to relinquish the region, he set out moves to increase wages for state workers in Crimea, boost pensions, turn the region into a tourism hub, protect energy links, end reliance on Ukraine for water and improve infrastructure.

Chants of “Russia!” and “Thank You!” from a Russian-flag-waving crowd greeted Medvedev on his visit to Sevastopol, home of Russia’s Black Sea Fleet.