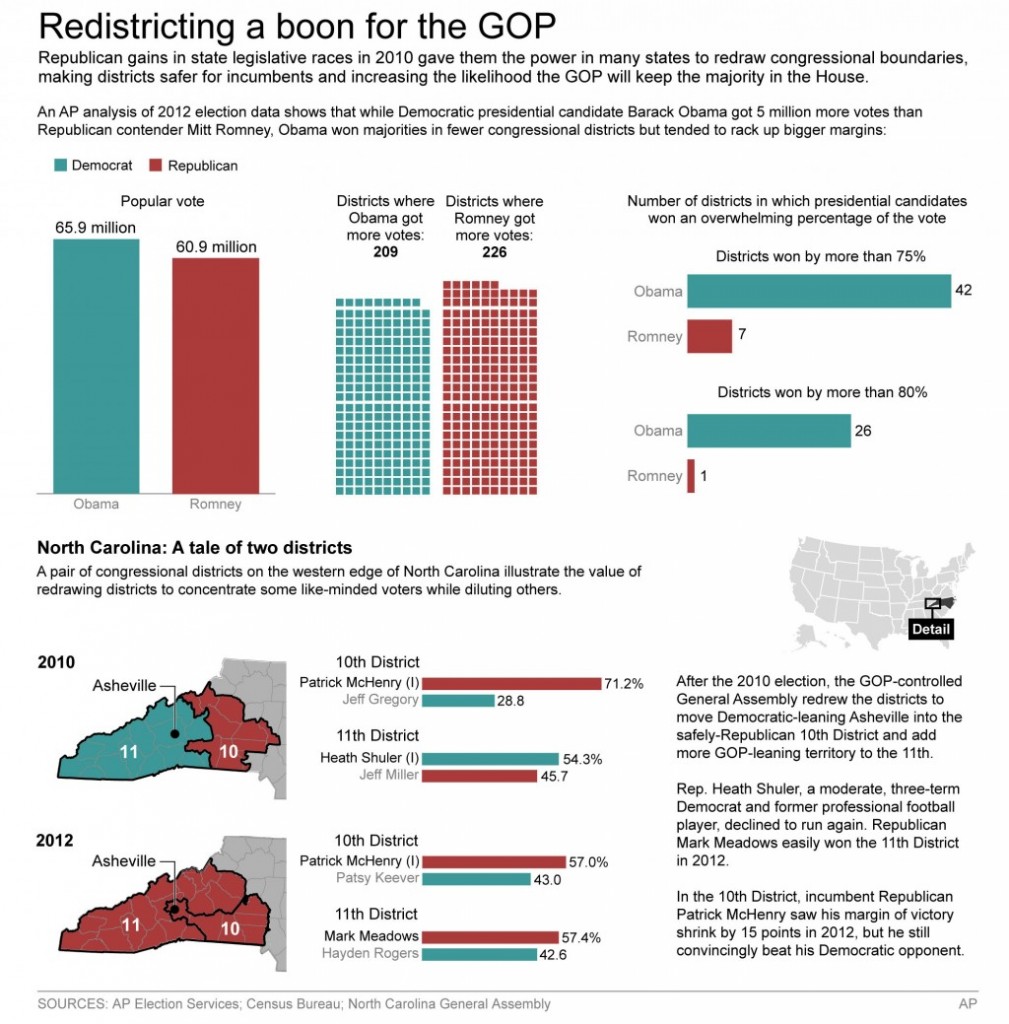 Even if Democrats recruit great candidates, raise gobs of money and run smart campaigns, they face an uphill fight to retake control of the House in this year’s congressional elections, regardless of the political climate in November. The reason? Republican strategists spent years developing a plan to take advantage of the 2010 census, first by winning state legislatures and then redrawing House districts to tilt the playing field in their favor. Their success was unprecedented.

In states like Ohio, Michigan and North Carolina, Republicans were able to shape congressional maps to pack as many Democratic voters as possible into the fewest House districts. The practice is called gerrymandering, and it left fertile ground elsewhere in each state to spread Republican voters among more districts, increasing the GOP’s chances of winning more seats.

Geography helped in some states. Democratic voters are more likely to live in densely populated urban areas, making it easier to pack them into fewer districts.

The first payoff came in 2012, when Republicans kept control of the House despite a Democratic wave that swept President Barack Obama to a second term. The next payoff is likely to come this fall when candidates once again compete in House districts drawn by Republican legislators in key states.

Gerrymandering has a long history in the United States, pursued enthusiastically by both Democrats and Republicans. But the GOP’s success at it this decade has been historic: In 2012, Republicans maintained a 33-seat majority in the House, even though GOP candidates as a group got 1.4 million fewer votes than their Democratic opponents.

It was only the second time since World War II that the party receiving the most votes failed to win a majority of House seats, according to statistics compiled by the House Clerk. Democrats gained eight seats but were still a minority.

“The fact that Republicans controlled redistricting (after 2010) meant that they were able to build up a wall, stopping a lot of the tide from running out,” said Justin Levitt, a law professor and redistricting expert at Loyola Law School in Los Angeles. were able to shore up a lot of the districts that had been won by, in many cases, tea party freshmen or other Republican freshmen.”

The Republicans’ advantage will fade as the decade wears on and the population changes. Democrats control the White House and the Senate, though control of the Senate will be up for grabs in November. Republicans control the House, giving them powerful leverage to block Obama’s second-term agenda.