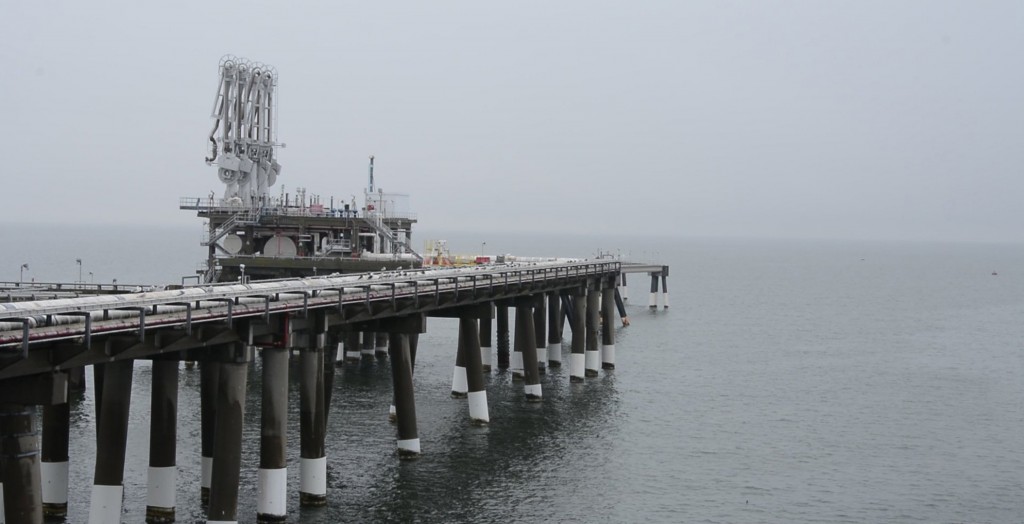 The natural gas pipes on Dominion’s Cove Point property begin on a pier in the Chesapeake Bay.

They then descend underground and run for more than a mile behind the walls of a dimly lit tunnel for foot-brake bicycles that workers use to travel from the dock to the shore. Above ground, the pipes pass acres of trees and finally connect to seven massive storage tanks before the gas ultimately travels to American consumers.

This winter, they have been empty of the imported gas that filled them for years. But now, Dominion and Maryland are bracing for the Chesapeake Bay dock – which was once a starting point for imported gas’s journey on American soil – to be the takeoff spot for exports.

When that happens, Cove Point will become the first operational gas-exporting facility on the East Coast. Dominion plans to begin construction by the end of the year.

The plan to export gas has raised questions across the state about whether the plant will be a boon for the economy or cause significant damage to the environment.

Some Marylanders see the export plant like Dominion does, as a job-creating opportunity for the state that is more environmentally friendly than coal production.

“It gives us a chance to export something,” said state Delegate James Proctor, a Democrat.

But others see the conversion as an environmental hazard that exposes all of Maryland to the potential risks of gas obtained through hydraulic fracturing, or fracking, and fear it could lead to use of the controversial gas-extraction method within the state.

For Dominion executives, the switch is logical due to increased global demand for American gas and, with $3.8 billion worth of changes, will be an efficient way to use the existing facility.

On the Dominion property, the main change will be the addition of a liquefaction plant that will cool the American-drilled natural gas and turn it into a liquid at 260 degrees below zero. The process reduces the gas volume and makes transporting it more efficient.

Dominion executives said a main heat exchange system, a turbine, compressors and cryogenic equipment will be among the project’s highest costs, but declined to give specific amounts.

While the construction process has not begun, Dominion has reached trade deals with Japan-based business group Sumitomo and India-based company GAIL. Dominion plans for the export facility to be operational by 2017.

The crisis in Ukraine has led the Department of State and the Obama administration to develop a strategy to more quickly deploy the United States’s natural gas to undermine Russia’s influence over Ukraine and Europe in future years.

The United States was a major natural gas importer until a few years ago. The gas supply in basins like Marcellus and new methods for extracting it, such as fracking, now enable the U.S. to wield political and economic influence as an exporter.

Russia supplies the majority of Ukraine’s natural gas, but recently announced it will no longer do so at a reduced price.

Though Dominion officials like Frederick say they see themselves as middlemen between gas basins in the region – such as the Marcellus Shale basin that runs under Pennsylvania and western Maryland – and foreign importers, many across the state say they foresee consequences for the whole state if exports are permitted.

The export proposal is pending review from the Federal Energy Regulatory Commission, and the power plant on the facility is being reviewed by Maryland’s Public Service Commission.

In addition to environmental concerns surrounding the plant, some question what will happen to domestic gas prices if gas is exported from Maryland.

Diana Dascalu-Joffe, senior general counsel for the Chesapeake Climate Action Network, said that because demand for natural gas is rising in the United States and many coal-fired power plants are being shut down, residents could expect higher prices if Maryland began exporting natural gas.

But John Felmy, chief economist with the American Petroleum Institute, said the supply of American gas is high enough to handle the demand without affecting consumer prices in Maryland.

“All the development of natural gas we’ve had, there’s still a lot that can come forth,” he said.

According to a report by the consulting group National Economic Research Associates for the Department of Energy, exports do not drive up domestic prices to the level foreign countries are willing to pay for American imports.

The report notes that the cost of transportation, liquefaction and turning the LNG from liquid to gas form at the import site ensures that domestic prices will not be similar to foreign costs.

The report also points to a capital investment in liquefaction facilities and an improved U.S. trade balance as foreign companies put more money into the American economy.

The report also notes, however, that if the country was producing gas in increased, steady amounts, it would increase the marginal cost of supply, which would lead to higher prices in the United States.

This would cause higher prices for consumers who use natural gas and for industries that factor natural gas heavily into their budgets.