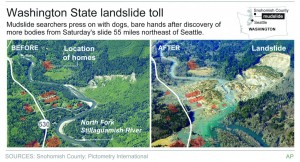 Families coping with the loss of friends, neighbors and normalcy sought comfort in religious services Sunday, as crews worked to recover more victims from the soggy pile of mud that buried the small mountainside community of Oso, Wash., more than a week ago.

Rescue crews said Sunday that many of the dogs that have been essential in the search for victims will take a two-day break. Days of sniffing through cold, soupy mud and nearly nonstop rain have taken their toll on the animals, and officials say dogs can lose their sensing ability if they work too long.

Dogs from the Federal Emergency Management Agency, more recent arrivals on the scene, will continue working, said Heidi Amrine, another spokeswoman for the operation.

Engineers were watching for any material sloughing off the landslide area, making sure that a weekend of torrential rainfall doesn’t displace more land.

Late Saturday, authorities said the number of people believed missing decreased substantially, from 90 to 30. The official death toll of victims identified by the medical examiner increased by one, to 18, said Jason Biermann, program manager at the Snohomish County Department of Emergency Management.

This article appeared in print on page 3 of the March 31st, 2014 edition of Hamodia.