With Crimea in Russia’s Grip, Questions Arise about Trans-Dniester 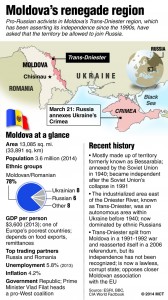 With Crimea now firmly under Russian control, many are casting their eyes around for the next likely target should Russia continue to redraw the map of modern Europe.

They’ve settled on the Republic of Trans-Dniester, a sliver of contested land that declared its independence from Moldova, Europe’s poorest nation, back in 1990 but has yet to be recognized by any government.

With a population of just half a million Trans-Dniester is little more than a blip on the map, but it’s become the focus of much attention.

“There is absolutely sufficient force,” he said of those troops, “to run to Trans-Dniester if the decision was made to do that, and that is very worrisome.”

Russia already has a troop presence in Trans-Dniester, separated from Russia by 400 miles of Ukraine and once part of the Moldovan Soviet Socialist Republic, one of the Soviet Union’s 15 units, until Moldova became independent in 1990 as the Soviet Union collapsed.

As that collapse was taking place, Trans-Dniester — so named because it’s on the east side of the Dniester River — declared independence from the rest of Moldova. A brief civil war ensued in 1992, which ended in over a thousand deaths and an uneasy stalemate.

At the end of the war, the Trans-Dniestern authorities invited around 1,500 Russian troops to stay, in order to keep the peace and ensure their independence. They’ve been here since.

But whether Russia is interested in Trans-Dniester is not so clear.

Last week, the chairman of the Supreme Council, Trans-Dniester’s governing body, asked Russia to consider drafting a law that could lead to the annexation of Trans-Dniester. Russia hasn’t responded, and despite the presence of its troops in the breakaway republic, it has yet to recognize Trans-Dniester’s independence.

Sitting in a park in the Moldovan capital of Chisinau, Nicolai Topalo, a 41-year-old Moldovan factory worker, spoke of his growing fear.

“The same stuff happening in Crimea could happen to us,” he said. “It feels very unstable, and I think we could be next. We are very small and weak, and we need to keep moving towards the protection of the EU.”

This article appeared in print on page 2 of the March 28th, 2014 edition of Hamodia.