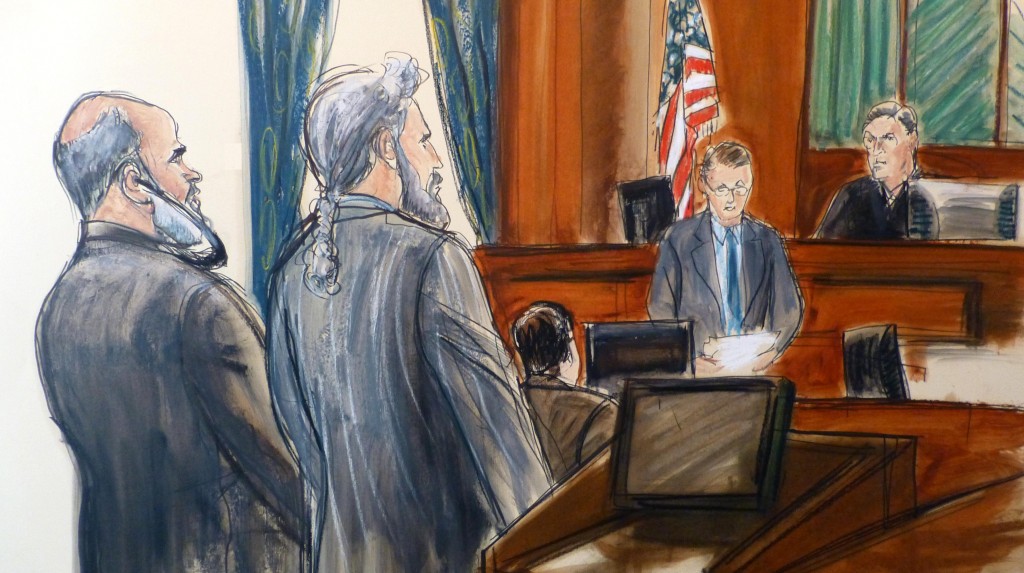 Osama bin Laden’s son-in-law, the voice of fiery al-Qaida propaganda videotapes after the Sept. 11 attacks, was convicted Wednesday of conspiring to kill Americans for his role as the terror group’s spokesman.

The verdict came after about six hours of deliberation over two days in the case against Kuwaiti imam Sulaiman Abu Ghaith, the highest-ranking al-Qaida figure to face trial on U.S. soil.

As the verdict was read, Abu Ghaith remained composed as he had throughout the trial. Just before he was led out of the courtroom, he turned toward a spectator — a longtime friend from Kuwait — and smiled.

In a statement, U.S. Attorney Preet Bharara said he hoped the verdict brought some measure of comfort to victims of al-Qaida.

“He was more than just Osama bin Laden’s propaganda minister,” Bharara said. “Within hours after the devastating 9/11 attacks, Abu Ghaith was using his position in al-Qaida’s homicidal hierarchy to persuade others to pledge themselves to al-Qaida in the cause of murdering more Americans.”

Abu Ghaith had testified during a three-week trial that he answered bin Laden’s request in the hours after the attacks to speak on the widely circulated videos used to recruit new followers willing to go on suicide missions like the 19 who hijacked four planes on Sept. 11, 2001.

“The storm of airplanes will not stop,” Abu Ghaith warned in an October 2001 video that was played for the jury.

Also shown repeatedly to the jury during the trial were frames of a video made Sept. 12, 2001, that showed Abu Ghaith seated next to bin Laden and two other top al-Qaida leaders as they tried to justify the attacks.

Captured in Jordan last year and brought to New York, Abu Ghaith actively participated in his trial. He listened to testimony and arguments through headphones linked to an Arabic translator.

Taking the witness stand in his own defense, Abu Ghaith calmly denied he was an al-Qaida recruiter and claimed his role was a religious one aimed at encouraging all Muslims to rise up against their oppressors. He insisted he agreed to meet with bin Laden in a cave on the night of Sept. 11 out of respect for bin Laden’s standing as a sheik.

“Despite knowing that he was responsible for the deaths of hundreds of Americans, you met with him to be polite, correct?” prosecutor Michael Ferrara asked on cross-examination.

In his closing argument, the prosecutor used the defendant’s testimony against him.

“Accept it as totally true. If you do that, he’s guilty,” he said.