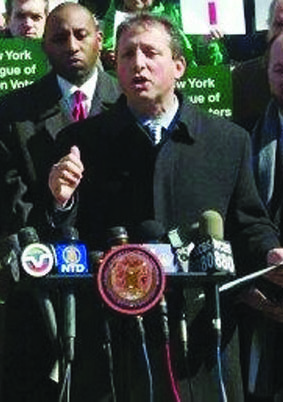 New York City shoppers may soon face a 10-cent fee on all plastic and paper bags, enlisting the nation’s largest city in a green movement.

The City Council introduced a bill Wednesday that would impose the fee in an effort to spur customers to bring their own reusable bags. Supporters say it would benefit the city’s economy as well as its environment.

“The bags get stuck in storms drains, they cause flooding and they litter our beaches,” Councilwoman Margaret Chin of Manhattan, a co-sponsor, said at a news conference on the City Hall steps. “And they cost New York City a lot of money.”

As if to underscore her words, a plastic bag then blew above the news conference, drawing laughter from the crowd.

In a series of online posts, Councilman David Greenfield sharply criticized the bill, calling it a “regressive tax that is proven to kill consumers,” and referring to a Huffington Post story that said that reusable bags result in higher incidents of infections.

The article cited a study that found a spike in San Francisco hospital emergency room treatment due to E. coli infections and a 46 percent increase in deaths from foodborne illness in the three months after the bag ban went into effect in 2007.

While people using reusable bags are urged to wash them regularly, most do not.

In an email to Hamodia, Greenfield also noted that many people reuse plastic bags for other things such as liners for small garbage bins, “and therefore naturally recycle them.”

City residents use 5.2 billion disposable plastic bags a year and it costs the city $10 million annually to ship used bags to landfills, according to the bills’ supporters.

The measure is expected to be voted upon within the next few weeks. The 10-cent fee would not be a tax. Instead, the money would benefit the store owners who supplied the bags.

Though grocery stores supply the vast majority of the disposable bags used across the city, the fee would also apply to bags sold at other retail stores. It would not apply to restaurant deliveries or most street food carts. The fee would also not be charged to shoppers who use public-assistance programs to buy food.

Councilman Brad Lander, a co-sponsor of the legislation, said the fee also applied to paper bags not because the bill was intended as a method for raising revenue, but as an incentive for customers to opt for reusable bags.

“Plastic is worse than paper, but it’s best is if people bring their own bags,” said Lander.

Some business owners have complained that the fee could keep shoppers away. A similar measure was introduced last summer but failed to gather the necessary support and therefore had to be re-introduced in front of the new council. Nineteen councilmembers are co-sponsoring the new bill, seven short of the votes needed to pass it.

Council Speaker Melissa Mark-Viverito said Wednesday that she would need to review the bill before determining her position. Her close ally, Mayor Bill de Blasio, stopped short of endorsing the bill a day earlier but said that reducing the number of plastic bags was “a societal goal.”