National Is It a Photo of Lincoln’s NYC Funeral Procession?
National 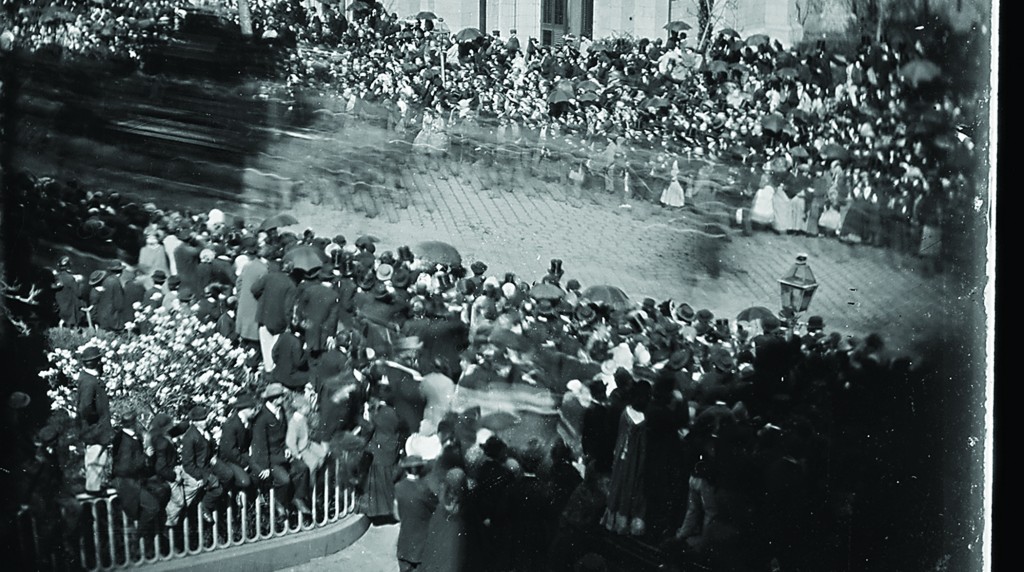 In the first photograph, the crowd seems to be waiting for something to come down the street. Children stand up front so they can see. Women, in the garb of the mid-1800s, shield themselves from the sun with umbrellas. White-gloved soldiers mill around. And a few people have climbed a tree for a better view.

In the second shot, some heads are bowed. Men have taken off their hats. And the blur of a large black object is disappearing along the street to the left of the frame. What the scene depicts, why it was photographed, or where, has been a mystery for decades, experts at the National Archives say.

A Maryland man has now offered the theory that the two photos are rare, long-forgotten images of Abraham Lincoln’s funeral procession in New York City.

Paul Taylor, 60, a retired federal government accountant, believes the scene is on Broadway, outside New York’s historic Grace Church. The day is Tuesday, April 25, 1865, 11 days after Lincoln was assassinated at Ford’s Theatre in Washington. And the crowd is waiting for, and then seems to be paying homage before, a horse-drawn hearse, whose motion makes it appear as a black blur as it passes by in the second picture.

If Taylor is right, scholars say he has identified rare photos of Lincoln’s marathon funeral rites, as well as images that show mourners honoring the slain chief executive.

Plus, it appears that the photographs were taken from an upper window of the studio of famed Civil War photographer Mathew Brady, which was across the street from the church.

“It’s a big deal,” said Richard Sloan, an expert on the Lincoln funeral ceremonies in New York. “What makes it even a bigger deal is to be able to study the people. Even though you can’t see faces that well, just studying the people tells a story.”

Sloan added, “It’s as if you’re there, and you can see the mood.”

Many people, including children, are dressed in their best clothes. A few look up at the camera. Flowers are in bloom. But there is no levity.

Sloan said he is convinced that the pictures show the funeral scenes: “There’s no doubt about it.”

But experts at the Archives caution that although the theory sounds good, there could be other explanations, and no way to prove it conclusively.

The digital photographs were made from some of the thousands of Brady images acquired by the federal government in the 1870s and handed down to the National Archives in the 1940s, according to Nick Natanson, an archivist in the Archives’ still-picture unit.

Next year is the 150th anniversary of Lincoln’s assassination.

The two photos in question, both captioned “scene in front of church,” apparently had gone unnoticed for decades. But something about them intrigued Taylor when he saw them among the hundreds of Brady photographs posted in January. Both were unusual four-image pictures — four shots of the same scene grouped together.

In the second picture, “I saw this black streak,” he said. “When I looked at it closer, I saw what it was. It was a funeral vehicle. … I knew it was Lincoln. It had to be. It couldn’t be anybody else.”

Natanson, of the Archives, was skeptical.

“It still strikes me as odd that … there wouldn’t have been some mention or some hint [in the caption] of the monumental nature of the event,” he said.

There could have been other events, “maybe even other processions, maybe even other funerals” during that time period, he said. “I don’t think it’s possible to establish this without any doubt.”

But if Taylor is right, it could be an important discovery, Natanson said: “It isn’t as if there are dozens of images of the funeral procession anywhere.”

The funeral observances for Lincoln, who was assassinated by actor John Wilkes Booth on April 14, 1865, went on for more than two weeks. During that time, the president’s body was moved by train on a 13-day, 1,600-mile journey from Washington to Springfield, Ill., where he was buried May 4.

Along the way, the train stopped in over a dozen major cities, and his coffin was removed for numerous processions and elaborate tributes. New York was the fourth major stop on the journey, after Baltimore, Harrisburg, Penn., and Philadelphia.

The president’s coffin was placed on view in New York’s City Hall on April 24, according to Swanson’s account. Lincoln had been dead for 10 days.

The next day the coffin was borne through jammed streets aboard a black hearse decorated with flags and black plumes and drawn by a team of 16 horses shrouded in black.

A half-million people lined the route, much of which was along Broadway.

“Thousands and thousands of these lookers on were too young … and were doubtless brought in order that in old age they might say they saw the funeral procession of Abraham Lincoln,” the The New York Times wrote the next day.