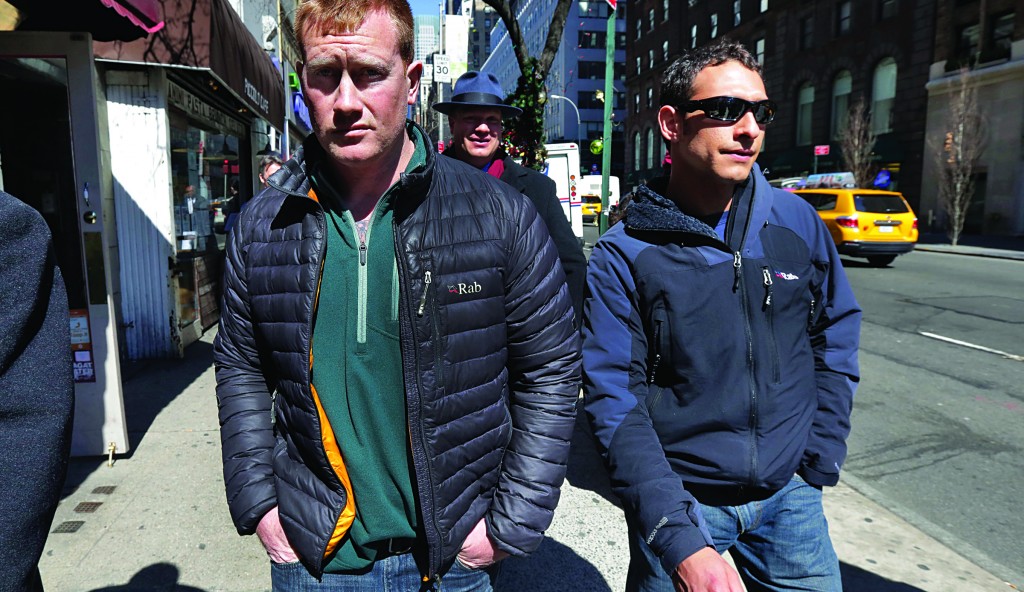 The three daredevils and an accomplice were facing charges including felony burglary in a Sept. 30 leap from the building, where a teenage boy was arrested on March 16. Authorities said the teen had slipped through a gap in a fence, eluded an inattentive security guard and spent about two hours atop the 1,776-foot-tall tower.

The incidents have raised questions about security at the lower Manhattan site, which is supposed to be one of the most tightly protected in the country. The climb to the top revealed that the site, which is owned by the Port Authority of New York and New Jersey, did not have a single security camera.

The NYPD said last fall that investigators were looking for two parachutists in dark jumpsuits seen floating near the building around 3 a.m. on Sept. 30, landing by a nearby skyscraper and walking away.

It was “very exhilarating,” one of the accused jumpers, Andrew Rossig, said Monday as he and co-defendant James Brady headed to a police precinct to surrender.

“It’s a fair amount of free-fall time,” he said. “You really get to enjoy the view of the city and see it from a different perspective.”

Rossig, an avid BASE jumper — the acronym stands for “building, antenna, span, earth” — said the skydivers took care to keep from endangering anyone, choosing a time when streets would be largely deserted.

It wasn’t immediately clear how investigators zeroed in on Rossig, Brady — an ironworker who formerly worked at the trade center — skydiving instructor Marko Markovich and Kyle Hartwell, accused of being their cohort on the ground. Police searched their homes last month and got video of the jump, which hadn’t been posted online or otherwise publicized, Rossig attorney Timothy Parlatore said. But he said authorities didn’t signal arrests were imminent until 16-year-old Justin Casquejo’s arrest last week.

“He has an impeccable background, and I just hope that he’s not turned into some form of a scapegoat for the Port Authority’s shortcomings” in security, Corozzo said.

The arraignment late Monday charges the four of misdemeanor reckless endangerment and misdemeanor jumping from a structure.

Police Commissioner William Bratton said the investigation was a joint endeavor by the NYPD and the Port Authority police.

“These men violated the law and placed themselves, as well as others, in danger,” Bratton said. “These arrests should send a message to anyone thinking about misusing a landmark this way. They will be tracked down and they will face serious charges. Being a thrill-seeker does not give immunity from the law.”

The NYPD devotes more than 200 officers, surveillance cameras and other technology to protect the perimeter of the site, while Port Authority police and private security agents guard the inside.

But Rossig said the jumpers got in simply by walking through a gap in a fence, echoing an account Casquejo gave police about what he did last week. An official disputed that, saying that Brady used his work access to secret his parachuting pals into the site.