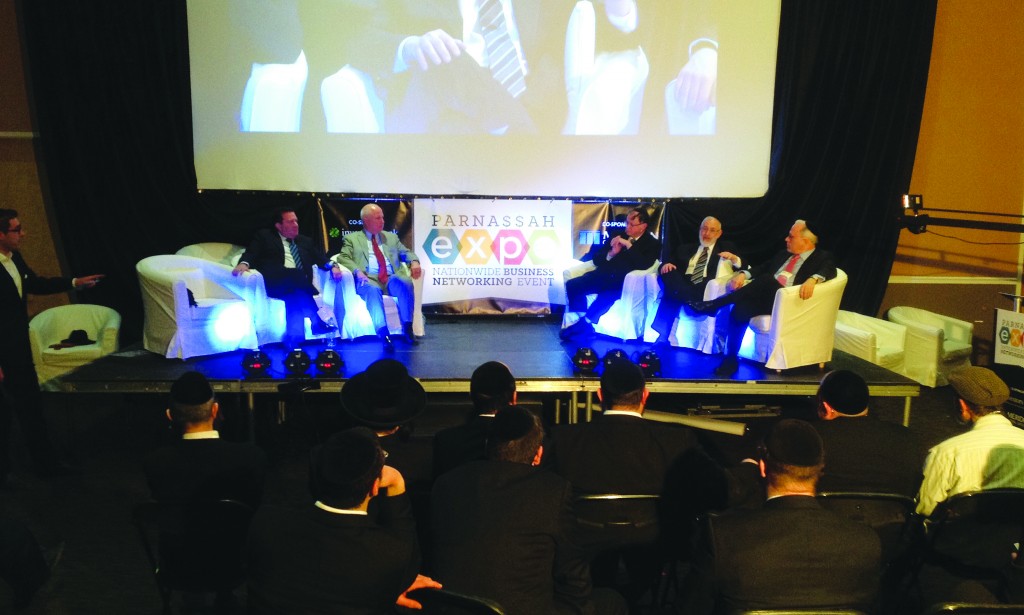 The New Jersey Convention and Exposition Center in Edison was a flurry of activity Tuesday on the opening day of the 2014 Parnassah Expo, which will feature another full day of activity on Wednesday.

Thousands of men and women from all walks of frum community life converged upon the Expo to help them advance in their particular parnassah endeavors. The center’s 150,000-square-foot parking lot was filled to capacity shortly after the Expo opened its doors at 11:00 a.m., with a potpourri of license plates from states across the nation adorning the cars that filled the spots.

Luminaries of the business world mingled with the owners of startup businesses and dreamers of future success.

As the afternoon progressed, a series of workshops were given in special partitioned sections of the main Expo floor, in addition to the business conference center, by noted experts from a cross-section of the business world. At 2:30p.m., the vast, high-ceilinged Meridian Executive Ballroom was filled by an overflow, standing-room-only crowd for the highly anticipated address by world-renowned criminal defense attorney Ben Brafman, an Orthodox Jew.

Noted community activist Rabbi Gedaliah Weinberger, Chairman Emeritus of the Board of Agudath Israel of America, served as the emcee.

“We have to make a Shehecheyanu when we see so many people together,” Rabbi Weinberger said. He spoke of how the Expo’s success, b’siyatta diShmaya, is the fruit of the determination and tireless efforts of its founder and director Reb Duvi Honig. “He has the vision to make it happen and just pushes on,” said Rabbi Weinberger.

In his characteristic manner, Mr. Brafman captivated the audience from the moment he stepped up to the podium. He spoke pointedly and poignantly about the importance of positively representing people of faith in the workplace and business world, and avoiding potentially costly legal misdeeds. “Today, if you commit a serious financial fraud, you are worse off in court than if you held up a liquor store at gunpoint,” he said.

Mr. Brafman’s address was followed by the keynote address, delivered by noted Orthodox entrepreneur and activist Howard (Tzvi) Friedman. Mr. Friedman quipped about how his path to business success began with a series of ventures throughout his childhood and adolescence, and detailed how several “big breaks” in his legendary business success came through seemingly small acts of one Yid helping another. “When people ask to see me today to help them, I don’t turn anyone down, no matter how tired or busy I am,”he said. “I believe that my chessed to others helps me succeed as well.”

The finale of the first day was the panel of elite business executives from both the Jewish community and beyond, who shared some of their unique experiences and answered audience questions. Noted attorney, entrepreneur and motivational speaker Mr. Charlie Harary moderated the forum with his inimitable perspectives and down-home style.

“What we all saw here today was an enormous kiddush Hashem,” remarks Reb Duvi Honig. “I look forward to another highly rewarding day tomorrow, b’ezras Hashem, offering people positive results for a long time to come.”