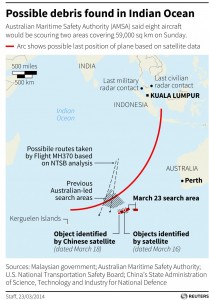 France provided new satellite data Sunday showing possible debris from the missing Malaysia Airlines jet, as searchers combing a remote part of the southern Indian Ocean tried without success to locate a wooden pallet that could yield clues to one of the world’s most baffling aviation mysteries.

The new data consists of “radar echoes” in the same part of the ocean where satellite images previously released by Australia and China showed what might be debris from the plane, French authorities said.

Flight 370 vanished March 8 with 239 people aboard while en route from Kuala Lumpur,
Malaysia, to Beijing, setting off a multinational search that has turned up no confirmed pieces and nothing conclusive on what happened to the jet.

The latest satellite data came to light as Australian authorities coordinating the search, conducted about 2,500 kilometers (1,550 miles) southwest of Perth, sent planes and a ship to try to “re-find” a wooden pallet that appeared to be surrounded by straps of different lengths and colors.

The pallet was spotted on Saturday from a search plane, but the spotters were unable to take photos of it, and a PC Orion military plane dispatched to locate it could not find it.

“So, we’ve gone back to that area again today to try and re-find it,” said Mike Barton, chief of the Australian Maritime Safety Authority’s rescue coordination center. He added: “It’s a possible lead.”

Wooden pallets are often used by ships, Barton cautioned. But he said airlines also commonly use them in cargo holds.

An official with Malaysia Airlines said Sunday night that the flight was, in fact, carrying wooden pallets. The official spoke on condition of anonymity in keeping with company policy.

AMSA said it has requested a cargo manifest from Malaysia Airlines.

When Brazilian searchers in 2009 were looking for debris from Air France Flight 447 after it mysteriously plunged into the Atlantic Ocean, they found a wooden pallet. The military initially reported the pallet came from the Air France flight, but backtracked hours later and said the plane had not been carrying any wooden pallets.

Sunday’s search was frustrating because “there was cloud down to the surface, and at times we were completely enclosed by cloud,” Royal Australian Air Force flight Lt. Russell Adams told reporters.

Nothing of interest was found, he said. But he added that the search was worth it because “we might do 10 sorties and find nothing, but on that 11th flight when you find something and you know that you’re actually contributing to some answers for somebody.”

In Paris, French Foreign Ministry spokesman Romain Nadal said in an interview with The Associated Press that the satellite radar echoes “identified some debris that could be from the Malaysian Airlines plane.”

The spokesman said that these echoes “are not images with a definition like a photograph, but they do allow us to identify the nature of an object and to localize it.”

“The French government has decided to increase its satellite monitoring of this zone and try to obtain precise images and locations,” Nadal said.

Gathering satellite echo data involves sending a beam of energy to the Earth and then analyzing it when it bounces back, according to Joseph Bermudez Jr., chief analytics officer at AllSource Analysis, a commercial satellite intelligence firm.

Satellite radar echoes can be converted into an image that would look similar to a black-and-white photo, though not as clear, he said. “You’d have to know what you’re looking at,” Bermudez said.

A Malaysian official involved in the search said the French data located objects about 930 kilometers (575 miles) north of the spots where the objects in the images released by Australia and China were located.

One of the objects located was estimated to be about the same size as an object captured Tuesday by the Chinese satellite that appeared to be 22 meters (72 feet) by 13 meters (43 feet), said the official, who declined to be identified because he wasn’t authorized to speak to the media. It was not possible to determine precise dimensions from the French data, the official said.

The southern Indian Ocean is thought to be a potential area to find the jet because Malaysian authorities have said pings sent by the Boeing 777-200 for several hours after it disappeared indicated that the plane ended up in one of two huge arcs: a northern corridor stretching from Malaysia to Central Asia, or a southern corridor that stretches toward Antarctica.

This article appeared in print on page 1 of the March 24th, 2014 edition of Hamodia.