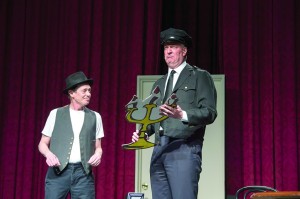 Mayor Bill de Blasio, the unabashedly liberal leader of the nation’s most populous city, was portrayed Saturday in the first act of the annual Inner Circle show as a steal-from-the-rich Robin Hood — but elicited big laughs in his rebuttal performance by poking fun at his own shortcomings with the help of some celebrity guests.

Playing before a crowd that included reporters and dignitaries such as former Mayor David Dinkins, Rep. Michael Grimm and Sen. Charles Schumer in the ballroom of the Manhattan Midtown Hilton, the Democratic de Blasio delivered a solid comedic performance by mocking his own tendency to be late and his goofy habit of making fun of himself.

Saturday’s show, dubbed “Stuck with de Bill,” featured a two-act reporters’ production followed by the mayor’s rebuttal. In the first part, Mr. Hood patrolled “Chirlane Forest,” a cheeky reference to his wife, Chirlane McCray, who was portrayed as seeking funds from Albany.

De Blasio’s performance began with him pretending to interview a corrupt New Jersey political boss from the 1920s for his yet-to-be-filled administration.

This article appeared in print on page 4 of the March 24th, 2014 edition of Hamodia.