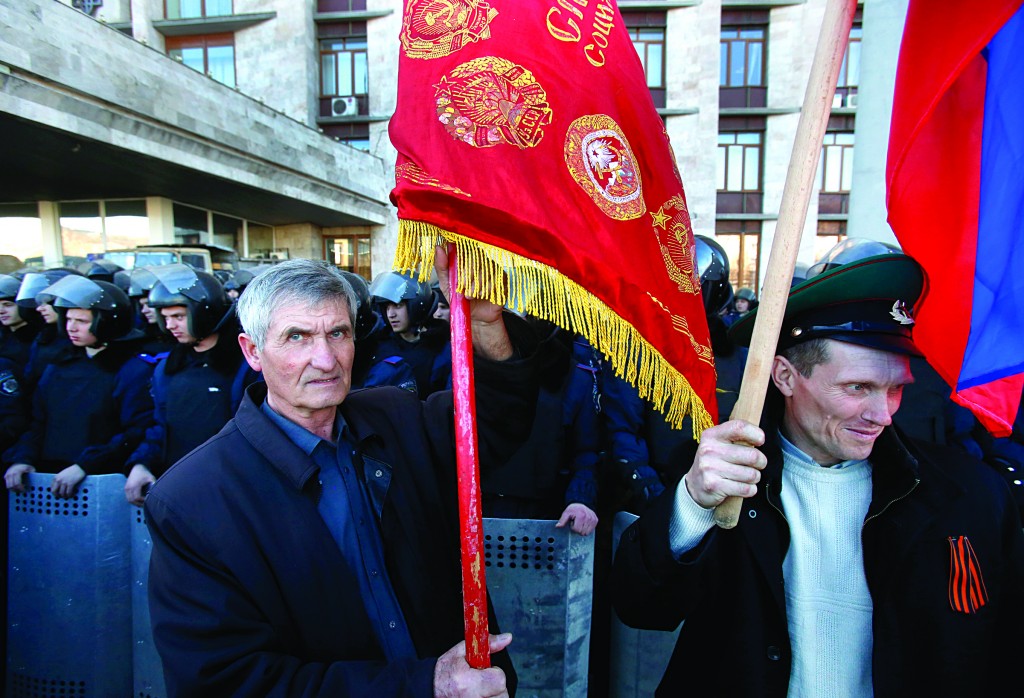 Three Ukrainian military officers on the Crimean peninsula remained missing Sunday and were believed to be held by Russian forces, a Ukrainian official said, as the Russians continued to seek full control of the peninsula’s military sites.

Col. Yuli Mamchur, the commander of an air force unit stationed in the town of Lubimovka near Sevastopol, had been missing more than 24 hours Sunday evening after he was taken by Russian troops, said Alexei Mazepa, a Ukrainian Defense Ministry spokesman.

The deputy commander of Ukraine’s navy, Ihor Voronchenko, was also unaccounted for and believed held by the Russians after he left navy headquarters in Sevastopol, which is under Russian control, Mazepa said.

Another officer, navy Capt. V. M. Demyanenko, was taken by the Russians in Sevastopol on Sunday morning and his whereabouts remained unknown by evening.

Russian forces occupied Crimea late last month, surrounding most Ukrainian military bases and units. Russian President Vladimir Putin declared last week that his country was taking over Crimea after a referendum among the region’s voters, a majority of whom speak Russian, backing annexation.

Since then, Russian troops and pro-Russian militia have been seizing military sites still in Ukrainian hands. The Russian Defense Ministry press service reported Sunday that its nation’s flag has been raised and the Russian national anthem sung at the sites of 189 Ukrainian military units deployed in Crimea.

On Saturday, Russian troops used six armored vehicles to break through the fence around Mamchur’s air force unit and then fired into the air, subduing the base’s personnel. One Ukrainian officer reportedly was injured.

Mazepa said of Mamchur: “To save lives he refrained from ordering armed resistance on Saturday when the Russian troops and local (pro-Moscow) militia stormed his unit.”

Some Ukrainian units have complained that they were given no instructions from Kiev, the Ukrainian capital, in the face of Russian aggression. Mazepa said it was possible his nation’s leadership was delaying in hopes of action this coming week by the United Nations General Assembly.

“It is a possibility that the U.N. General Assembly may declare Crimea a demilitarized zone and demand the withdrawal of both Russian and Ukrainian troops from it simultaneously,” Mazepa said. “If there are no Ukrainian troops by that time left in Crimea, this question can’t be considered. This may explain why Russians are doing their utmost to capture as many of Ukraine’s remaining bases as they can and raise their flag over them.”

“The situation is very volatile and Russian pressure is growing by the minute,” Tymchuk, head of Kiev-based Center for Military and Political Research, said in a phone interview. “The way the Russians move they can capture these units and vessels within the next few hours.”