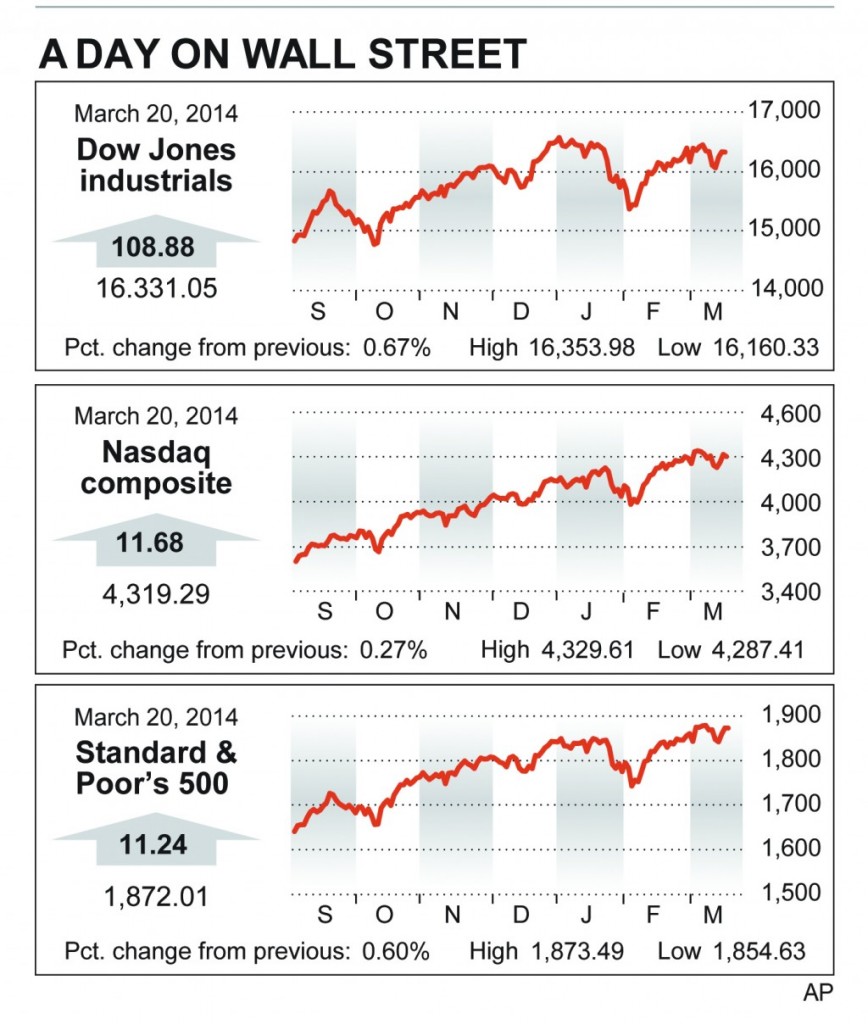 The stock market got a bounce on the first day of spring.

Signs that the U.S. economy is emerging from a winter chill drove major stock indexes higher Thursday. Investors were encouraged by an increase in manufacturing and a rise in a key index of economic indicators.

The market had slumped the day before, when Federal Reserve Chair Janet Yellen suggested that the central bank could start raising interest rates sooner than many investors had expected.

“The economy is likely to have a good bounce in the springtime,” said Peter Cardillo, chief market economist at Rockwell Global Capital. “The market is reacting to the good economic news.”

The S&P 500 came within a fraction of a point of wiping out all of its losses from a day earlier, when it dropped 11.48 points.

Stocks started the day lower, extending their losses from Wednesday, as investors mulled comments the day before from Yellen, who set the stage for a possible interest rate hike by the middle of next year. The Fed on Wednesday also dropped its previous position of saying it would consider raising interest rates once the unemployment rate declined to 6.5 percent. Unemployment is currently 6.7 percent.

Higher interest rates could slow the economy by raising the cost of borrowing money. That could hold companies back from borrowing to expand their businesses or discourage consumers from taking out loans such as mortgages. At the same time, a decision by the Fed to raise rates would indicate the central bank thinks the economy is getting stronger.

The market turned higher in midmorning trading following news that a measure of the U.S. economy’s health rose in February by the largest amount in three months. That suggests growth will accelerate following a severe winter.

The Conference Board’s index of leading indicators increased 0.5 percent following a slight 0.1 percent rise in January and a 0.1 percent decline in December.

The Federal Reserve Bank of Philadelphia said separately that manufacturing rebounded in that region in March as new orders increased.

Microsoft was among the big gainers on Thursday. The software company’s stock climbed $1.06, or 2.7 percent, to $40.33 after analysts at Morgan Stanley said a rumored plan to make a version of its Office software available for iPad devices could generate $1.2 billion in annual revenue.

3-D printing companies were among the losers after ExOne reported a fourth quarter loss late Wednesday and said its revenue fell. ExOne slid $4.35, or 10 percent, to $39.40. Other 3D-printer companies, including Stratasys and 3D Systems, also fell.

Stocks have become more volatile this year as Fed policy makers have started reducing their economic stimulus, and investors have fretted whether the economy is strong enough to maintain its recovery without the central bank’s support.

The stock market is in the sixth year of a bull market and has risen 172 percent since March 2009. That rise has been aided by the Fed’s stimulus, which has strengthened the economy by keeping interest rates low.

Bond prices were little changed a day after the Fed announced it would make further reductions to its bond-buying program. The yield on the 10-year government was unchanged from Wednesday at 2.77 percent.