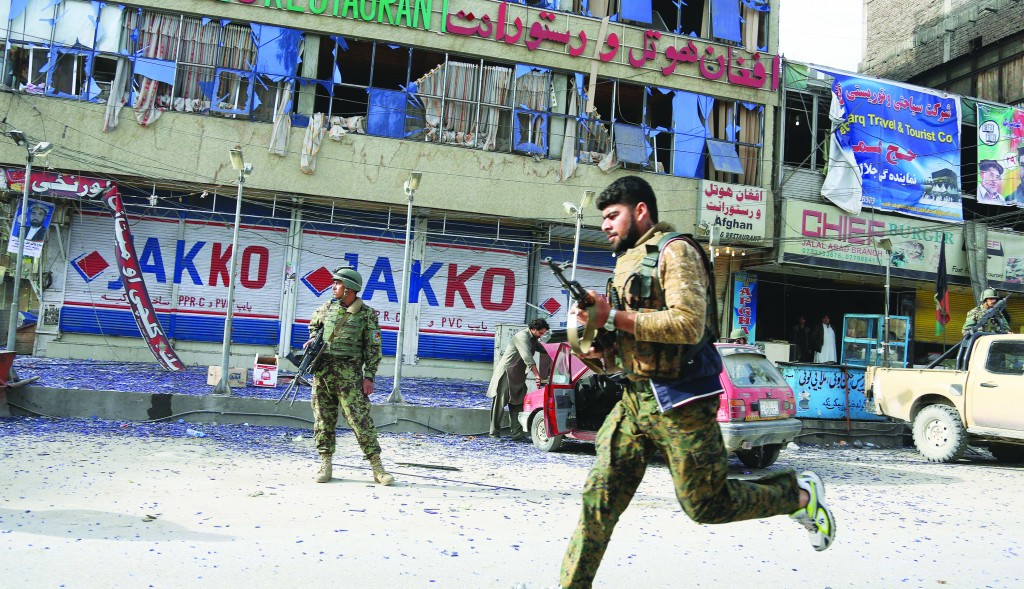 Four gunmen with pistols stuffed into their socks attacked a luxury hotel frequented by foreigners in Afghanistan’s capital Thursday, just hours after terrorists killed 11 people in an audacious assault on a police station in eastern Afghanistan.

All the assailants were killed in both standoffs, but made their point: Afghan forces face a huge challenge in securing upcoming elections in what will be a major test of their abilities as foreign troops wind down their combat mission at the end of this year.

The attacks show the Taliban are following through on their threat to use violence to the disrupt April 5 vote, which will be the first democratic transfer of power since the 2001 U.S.-led invasion that ousted the Islamic militant movement. President Hamid Karzai is constitutionally barred from seeking a third term.

Taliban spokesman Zabihullah Mujahid claimed responsibility for the assault on the Serena hotel and the earlier attack in Jalalabad, an economic hub near the border with Pakistan.

“Our people, if they decide to attack any place, they can do it,” he said.

Afghanistan’s upcoming elections include provincial votes, but the most closely watched is the presidential race. Karzai’s successor will guide the country for the next five years as most U.S. and allied forces leave the country by the end of 2014.

As part of the withdrawal process, Afghan authorities on Thursday released dozens of prisoners who had been held by foreign troops, including some 40 who had been detained by British forces.