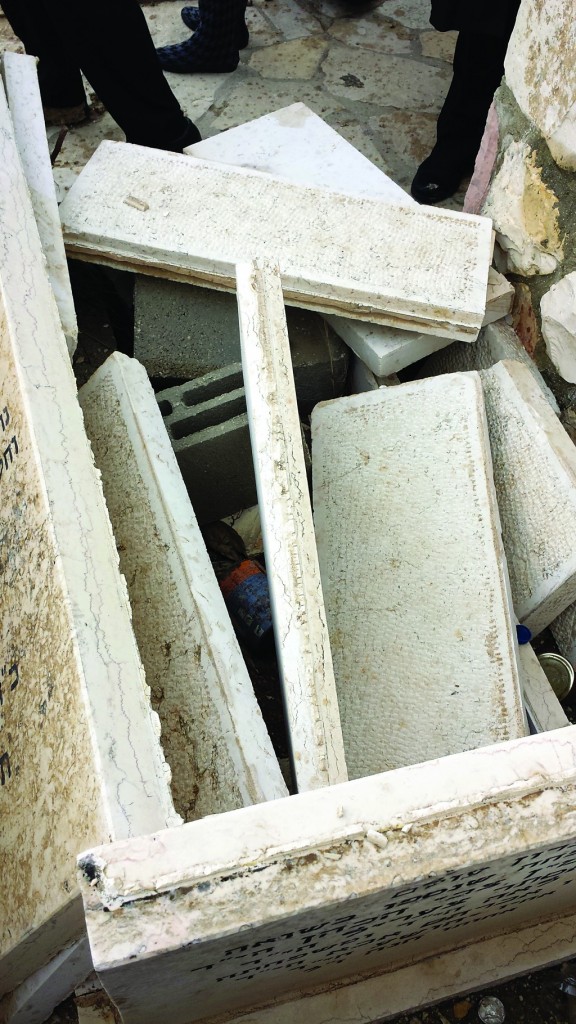 The tragedy of losing a four-year-old granddaughter was difficult enough. But when the two grieving grandfathers, came to visit the grave of the little girl on Har Hazeisim at the end of the shivah period on Wednesday, they were shocked to find that Arabs had totally demolished the grave adjacent to where she was buried and in an act of callous defilement the vandals had filled the empty space with garbage. Both grandfathers are members of the International Committee for the Preservation of Har Hazeisim (ICPHH), which has been spearheading the effort to secure the 3,000-year-old Jewish cemetery, the second holiest site in Judaism.

Abe Lubinsky, Chairman of the ICPHH, said that the vicious grave desecration was another sign that “the Arabs are bent on denying Jewish sovereignty over Har Hazeisim.” He noted that this had been the first such grave desecration in the cemetery itself in nearly six months despite an ongoing onslaught of rock throwing on the approaches to Har Hazeisim.

While the government has installed nearly 147 surveillance cameras, strangely it still had not installed the cameras in the Kollel Polen section where the desecration occurred and where Mr. Lubinsky’s parents are buried. That section of the cemetery had previously been a major site of desecration, where in 2012 New York Congressmen Jerrold Nadler and Elliott Engel joined Malcolm Hoenlein, the Vice Chairman of the Conference of Presidents of Major American Jewish Organizations in viewing the systematic destruction of graves. New fencing had been installed in the section with several entrance points. The Arabs apparently chose the grave of Polish Holocaust survivors who were buried right near one of the fence openings and directly in front of the little girl’s grave.

Mr. Lubinsky said that leading Israeli government officials had promised new strong security measures but the new desecration showed that they are clearly insufficient. Even a police substation atop of Har Hazeisim operates only infrequently with a skeleton staff despite promises to the ICPHH that it would be staffed by 24 officers, 24/7.

The ICPHH is launching a major campaign to secure Har Hazeisim even as Palestinian leaders vow to make the entire area the capital of their future state.

Mr. Lubinsky pleaded for broad Jewish support around the world for this urgent push to secure Har Hazeisim: “How we respond in the face of the ongoing issues with security on Har Hazeisim will directly affect the future of a united Jerusalem.” He said that a master Palestinian Authority building plan discovered in Beit Lechem  called for continuous Arab building on this North-South axis to cut off the Ma’ale Adumim block of Jewish communities.

The Arabs have already built 50,000 illegal houses in east Jerusalem.

Arab maps never acknowledge the existence of Har Hazeisim and simply refer to it as a contiguous Ras al Amud neighborhood. Most significantly, Har Hazeisim interrupts the link between the southern and northern Arab blocs.

It is clear that were it not for Har Hazeisim the neighborhoods of Ras al Amud, Silwan, Sheikh Jarrah and Ator would connect the entire area as Arab land.

As one can clearly see from atop the Rockefeller Museum, Emek Tzurim,  Har Hazeisim, and  Ir David form a chokepoint preventing Arab contiguous building through the Holy Basin.