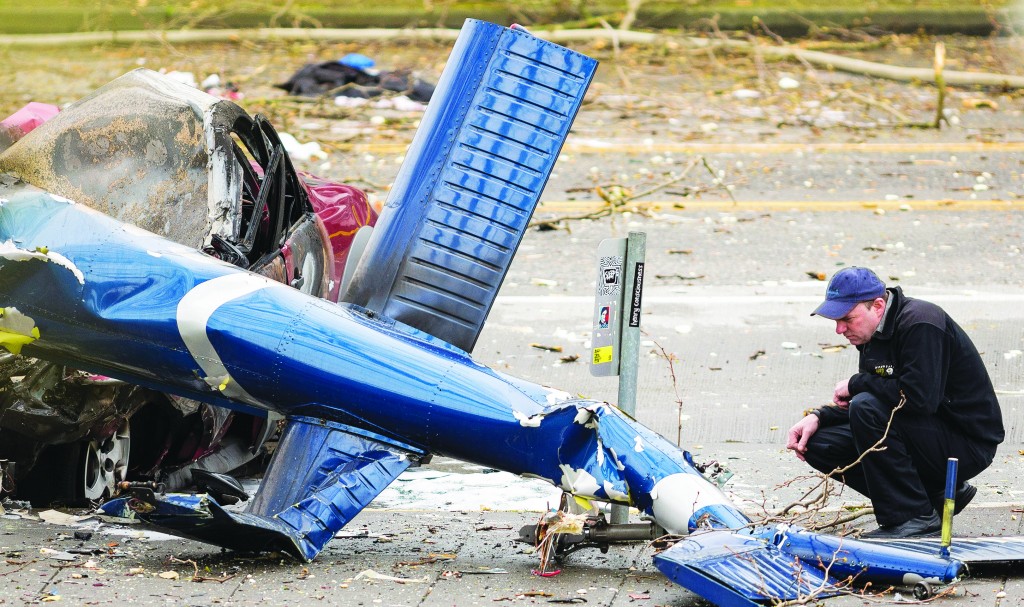 A news helicopter crashed into a street and burst into flames Tuesday near Seattle’s Space Needle, killing two people on board, badly injuring a man in a car and sending plumes of black smoke over the city during the morning commute.

The chopper was taking off from a helipad on the KOMO station’s roof when it went down at a busy downtown intersection and hit three vehicles, starting them on fire and spewing burning fuel down the street.

Kristopher Reynolds, a contractor working nearby, said he saw the helicopter lift about 5 feet off the low-rise building before it started to tilt. The chopper looked like it was trying to correct itself when it took a dive.

“Next thing I know, it went into a ball of flames,” he said.

Seattle Mayor Ed Murray said that in response to the crash, the city will review its policies about permitting helicopter pads.

He noted the normally bustling Seattle Center wasn’t very busy at the time of the wreck on Broad Street. Had it been a busier day, “this would have been a much larger tragedy,” Murray said.

The Seattle Center campus is home to the Space Needle, restaurants and performing arts centers; it hosts a number of festivals throughout the year that draw thousands of visitors.

KOMO identified the pilot as Gary Pfitzner. The other man killed in the crash was Bill Strothman, a former longtime KOMO photographer. Both men were working for the leasing company that operates the news helicopter, the station said.

An injured man managed to free himself from a car and was taken to Harborview Medical Center, Moore said.