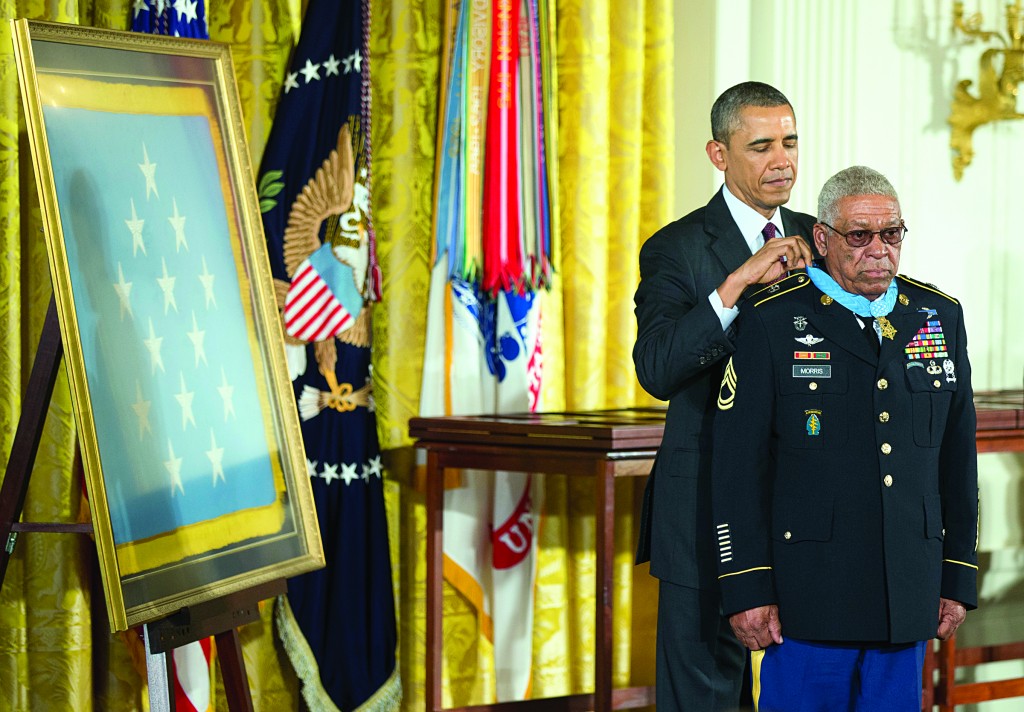 They were heroes who didn’t get their due.

On Tuesday, 24 ethnic or minority U.S. soldiers who performed bravely under fire in three of the nation’s wars finally received the Medal of Honor that the government concluded should have been awarded a long time ago.

The servicemen — Hispanics, Jews and African-Americans — were identified following a congressionally mandated review to ensure that eligible recipients of the country’s highest recognition for valor were not bypassed due to prejudice. Only three of the 24 were alive for President Barack Obama to drape the medals and ribbons around their necks.

“Today we have the chance to set the record straight,” Obama said. “No nation is perfect, but here in America we confront our imperfections and face a sometimes painful past, including the truth that some of these soldiers fought and died for a country that did not always see them as equal.”

The three surviving recipients — Vietnam veterans Jose Rodela, Melvin Morris and Santiago Erevia — received a prolonged standing ovation at Obama’s side, their faces set in somber acknowledgement of the honor.

Rodela, now of San Antonio, was a 31-year-old company commander of a Special Forces strike group on Sept. 1, 1969, in Phuoc Long Province, Vietnam, when he and his company of Cambodian soldiers whom he had helped recruit came under fire from North Vietnamese Army troops.

According to his Medal of Honor citation and supporting documents, the battle lasted 18 hours and 11 men in his company were killed and 33 others wounded.

The citation states that late in the battle, Rodela “was the only member of his company who was moving and he began to run from one position to the next, checking for casualties and moving survivors into different positions in an attempt to form a stable defense line. Throughout the battle, in spite of his wounds, Rodela repeatedly exposed himself to enemy fire to attend to the fallen and eliminate an enemy rocket position.”

In an interview with the Army News Service last December, he said simply, “We trained for this and I would have done it again.”

Morris of Cocoa, Fla., was a staff sergeant during combat operations on Sept. 17, 1969, near Chi Lang, South Vietnam. According to the Pentagon, Morris led soldiers across enemy lines to retrieve his team sergeant, who had been killed. He single-handedly destroyed an enemy force hidden in bunkers that had pinned down his battalion. Morris was shot three times as he ran with American casualties.

Morris received the Distinguished Service Cross in April 1970. That same month, he returned to Vietnam for his second tour.

“I never really did worry about decorations,” Morris told The Associated Press last month. But he said he fell to his knees when he received the surprise call from Obama with news that he was to be honored.

Erevia, also of San Antonio, was cited for courage while serving as a radio-telephone operator on May 21, 1969, during a search-and-clear mission near Tam Ky, South Vietnam. He was a “specialist 4” when his battalion tried to take a hill fortified by Viet Cong and North Vietnam Army soldiers. The Pentagon says he single-handedly silenced four Viet Cong bunkers.

As for the medal, he told the publication Soldier Live last month, “I’m only thankful I’m getting it while I’m alive.”

Tuesday’s mass ceremony, the largest since World War II, was the result of an Army review conducted under a directive from Congress in the 2002 National Defense Authorization Act. The law required that the record of each Jewish-American and Hispanic-American veteran who received a Service Cross during or after World War II be reviewed for possible upgrade to the Medal of Honor.

The Pentagon said the Army reviewed the cases of the 6,505 recipients of the Distinguished Service Cross from World War II and the Korean and Vietnam wars and found an eligible pool of 600 soldiers who may have been Jewish or Hispanic. The Army also worked with the National Museum of American Jewish Military History, the Jewish War Veterans of the USA and the American GI Forum, the largest Hispanic-American veterans group, to pinpoint potential medal recipients.

During the initial review, investigators found that other minority soldiers who had received the Distinguished Service Cross appeared to meet the criteria for a Medal of Honor. Congress amended the directive to allow those soldiers to be considered for the upgraded honor.