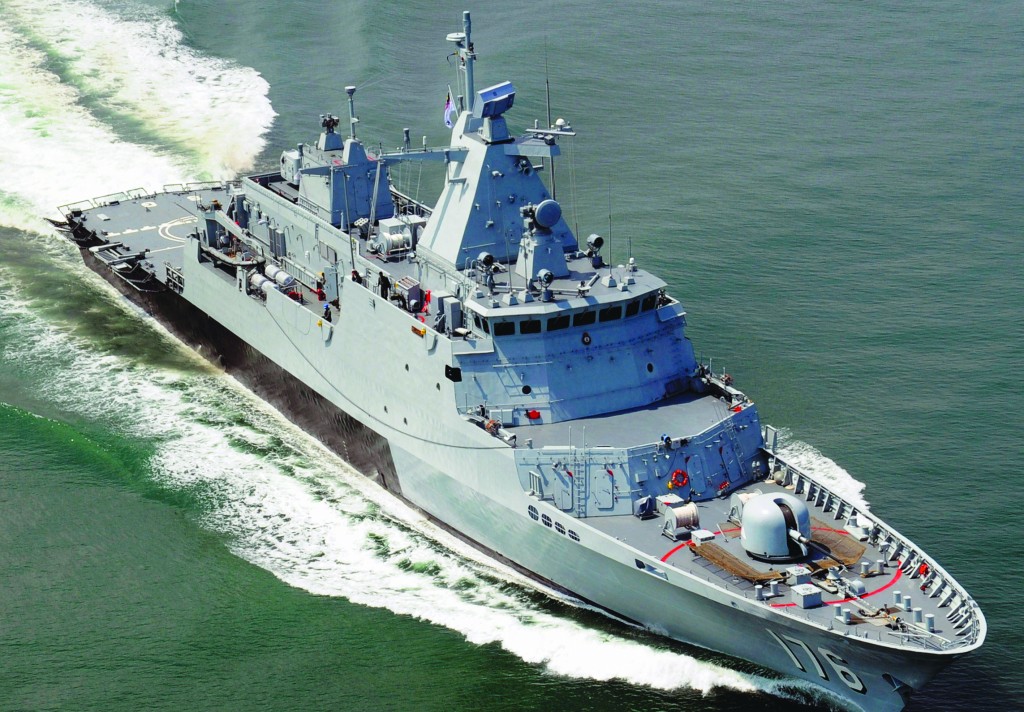 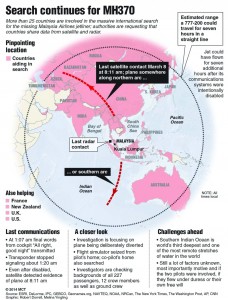 An international land and sea search for a missing Malaysian jetliner is covering an area the size of Australia, authorities said on Tuesday, but police and intelligence agencies have yet to establish a clear motive to explain its disappearance.

Investigators are convinced that someone with deep knowledge of the Boeing 777-200ER and commercial navigation diverted Malaysia Airlines Flight MH370, carrying 12 crew and 227 mainly Chinese passengers, perhaps thousands of miles off its scheduled course from Kuala Lumpur to Beijing.

Intensive background checks of everyone aboard have so far failed to find anyone with a known political or criminal motive to hijack or deliberately crash the plane, Western security sources and Chinese authorities said.

Investigators piecing together patchy data from military radar and satellites believe that someone turned off the aircraft’s identifying transponder and ACARS system, which transmits maintenance data, and turned west, re-crossing the Malay Peninsula and following a commercial aviation route towards India.

Malaysian officials have backtracked on the exact sequence of events. They are now unsure whether the ACARS system was shut down before or after the last radio message was heard from the cockpit — but said that did not make a material difference.

“This does not change our belief, as stated, that up until the point at which it left military primary radar coverage, the aircraft’s movements were consistent with deliberate action by someone on the plane,” said Hishammuddin. “That remains the position of the investigating team.”

China’s ambassador to Malaysia said his country had investigated its nationals aboard the flight and could rule out their involvement.

U.S. and European security sources said efforts by various governments to investigate the backgrounds of everyone on the flight had not, as of Monday, turned up links to terrorist groups or anything else that could explain the jet’s disappearance.

Accounts of their lives portray them as sociable, well-balanced and happy. Neither fits the profile of a loner or extremist with a motive for suicide or hijacking.

“I’ve never seen him lose his temper. It’s difficult to believe any of the speculation made against him,” said Peter Chong, a friend of Zaharie, describing him as highly disciplined and conscientious.

The New York Times cited senior U.S. officials as saying that the first turn back to the west was likely programmed into the aircraft’s flight computer, rather than being executed manually, by someone knowledgeable about aircraft systems.

Malaysian officials said on Monday that suicide by the pilot or co-pilot was a line of inquiry, although they stressed that it was only one of the possibilities under investigation. Police have searched their homes in middle-class suburbs of Kuala Lumpur close to the airport.

Among the items taken for examination was a flight simulator Zaharie had built in his home.

A senior police officer with direct knowledge of the investigation said the programs from the pilot’s simulator included Indian Ocean runways in the Maldives, Sri Lanka, Diego Garcia and southern India, although he added that U.S. and European runways also featured.

“Generally these flight simulators show hundreds or even thousands of runways,” the officer said. “What we are trying to see is what were the runways that were frequently used.”

‘Needle in a Haystack’

Thailand said on Tuesday a re-examination of its military radar data had picked up the plane re-tracing its route across Peninsular Malaysia. The Thai military had previously said it had not detected any sign of the plane.

What happened next is less certain. The plane may have flown for another six hours or more after dropping off Malaysian military radar about 200 miles northwest of Penang Island.

But the satellite signals that provide the only clues were not intended to work as locators. The best they can do is place the plane in one of two broad arcs — one stretching from Laos up to the Caspian Sea, the other from west of Indonesia down to the Indian Ocean off Australia — when the last signal was picked up.

China, which, with Kazakhstan, is leading the search in the northern corridor, said on Tuesday it had deployed 21 satellites to scour its territory.

Australia, which is leading the southernmost leg of the search, said it had shrunk its search field based on satellite tracking data and analysis of weather and currents, but that it still covered 230,000 sq miles.