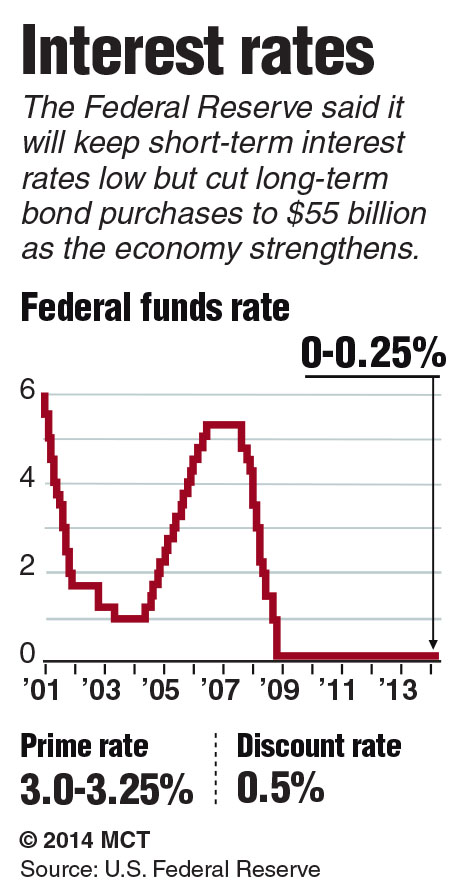 Federal Reserve policymakers voted Wednesday to continue reducing their bond-buying stimulus program, and said they no longer would consider raising its near-zero interest rate once the unemployment rate fell below 6.5 percent.

The Federal Open Market Committee voted 8-1 to cut its monthly bond purchases to $55 billion, staying on pace to end the controversial program by the end of the year. The economy grew more slowly this winter, but that was partly because of bad weather.

But Fed policymakers improved their outlook on the unemployment rate, forecasting it would drop as low as 6.1 percent by the end of the year, compared to a December projected low of 6.3 percent.

The committee removed a reference in previous statements to keeping the central bank’s benchmark interest rate near zero as long as the unemployment rate was above 6.5 percent.

Fed policymakers said in their statement that they took the step because the unemployment rate was nearing that point – it was 6.7 percent in February.

But the statement said the revision “does not indicate any change in the committee’s policy intentions.”

The policy statement was the first for the Federal Open Market Committee since Janet L. Yellen took over as central bank chairwoman on Feb. 3.

After presiding over her initial two-day committee meeting this week, Yellen was scheduled to give her first news conference Wednesday to explain the Fed’s actions and answer questions.

The statement said data since the committee last met in January “indicates that growth in economic activity slowed during the winter months, in part reflecting adverse weather conditions.”

“Labor market indicators were mixed but on balance showed further improvement,” the Fed said. “The unemployment rate, however, remains elevated.”

Fed officials said in December they would taper the central bank’s $85 billion in monthly bond purchases by $10 billion and continue reducing the program “in measured steps” at future meetings if the outlook for the labor market continued to improve and inflation remained in check.

The Fed reduced the purchases by $10 billion again in January, and the policy committee did not meet in February.

Some weak economic data this winter, including lackluster job creation in December and January, led to concerns that the recovery was weakening and speculation that Fed officials might hold off on further stimulus reductions.

But job growth rebounded in February, and some other recent reports indicated the slowdown was related to unusually harsh winter weather.

The Fed’s benchmark short-term interest rate has been near zero since late 2008.

But the unemployment rate fell through most of last year and was at 6.7 percent in February.

With the potential for the rate to fall below 6.5 percent soon, there was much speculation before the announcement that Fed policymakers would revise their so-called forward guidance.