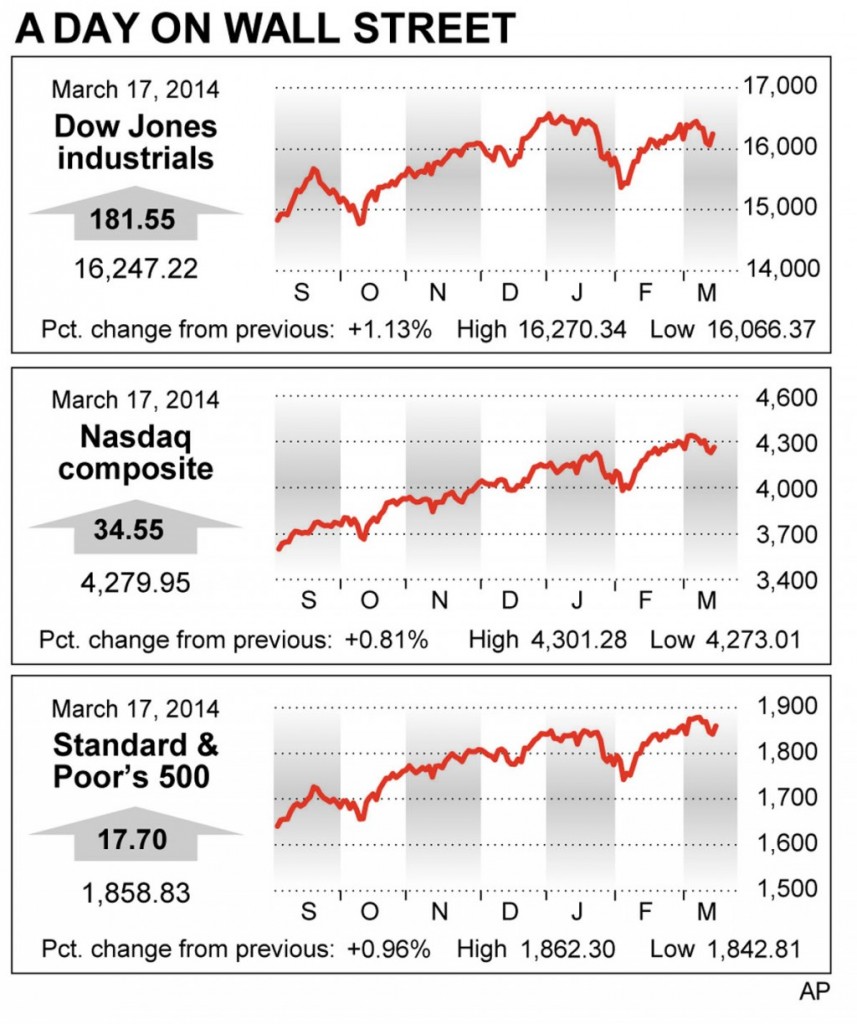 Investors were able to put aside the ongoing political turmoil in Ukraine on Monday to focus on a bit of good news on the U.S. economy.

The market’s gains were broad. All 30 members of the Dow and all 10 industry groups of the S&P 500 rose.

Technology stocks were among the biggest gainers, led by Yahoo, which rose 4 percent. Yahoo owns a quarter of the Chinese e-commerce website AliBaba, which announced plans to go public in the U.S. While relatively unknown in the U.S., AliBaba is one of the world’s most-trafficked websites in the world’s second-largest economy. Yahoo rose $1.51 to $39.11.

Other tech stocks also rose, including Microsoft, Google and Amazon.

Monday’s advance comes after stocks spent much of last week in retreat. The major indexes fell roughly 2 percent, their worst week since January, on concerns that the tensions between Ukraine and Russia could boil over. Those tensions are no closer to being resolved, but so far armed conflict does not appear to be in the cards.

With the Crimean vote behind them, U.S. investors exited their traditional safe havens to return to riskier parts of the market. Bond prices fell, pushing the yield of 10-year Treasury note up to 2.70 percent from 2.66 percent Friday. The price of gold fell modestly.

Utilities, a popular industry sector in times of uncertainty, rose less than the rest of the market. The Dow Jones Utility Average, which tracks the performance of 15 utility companies, rose 0.7 percent on Monday versus the S&P 500’s 1 percent gain.

Back in the U.S., investors got a dose of good news on economy.

“It’s another small piece of evidence that the economy is beginning to thaw from the winter,” said Jack Ablin, chief investment officer at BMO Private Bank, which oversees $66 billion in assets.

The Federal Reserve will hold a two-day policy meeting starting Tuesday. Investors expect the central bank to pull back further on its bond-buying economic stimulus program, as it has done for the last two meetings. The Fed will announce its decision Wednesday.

— Sears Holdings rose 83 cents, or 2 percent, to $44.84 after announcing that it planned to split off its Lands’ End business.

— Rental car company Hertz Global rose $1.24, or 5 percent, to $27.22 on reports that the company was looking to sell its construction equipment rental business.

In currency trading, the dollar rose to 6.177 Chinese yuan, up 0.4 percent from late Friday — a sharp move for one currency on a single day. The yuan has reversed course recently after strengthening steadily for years. Analysts believe China’s central bank is guiding the exchange rate lower against the dollar in an effort to discourage speculators from moving money into the country to profit from the yuan’s rise.