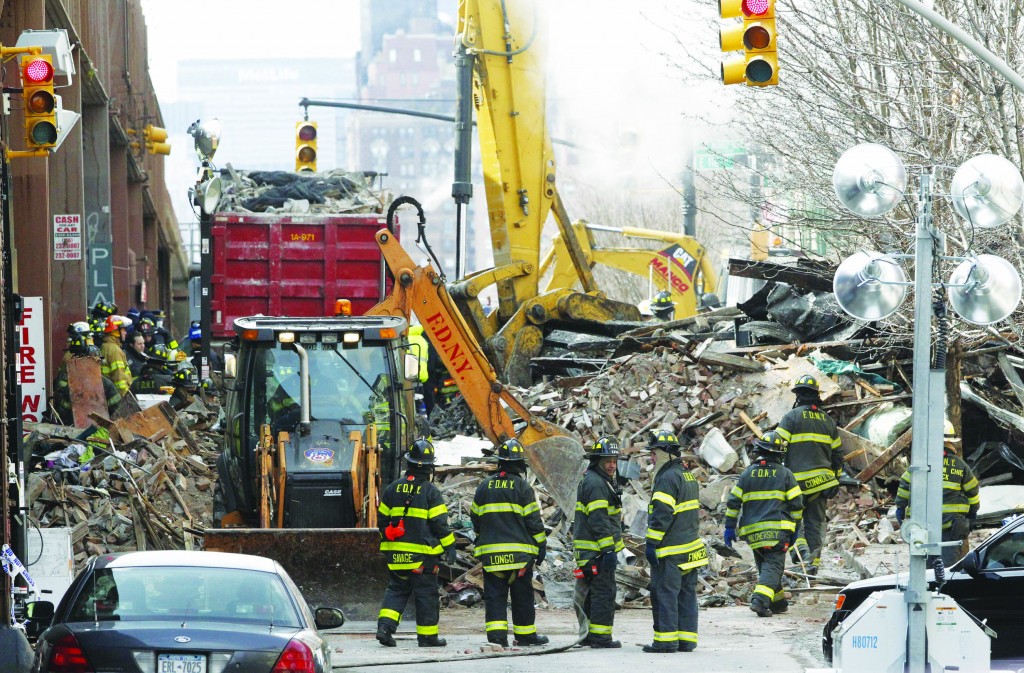 Rescuers working amid cold, gusty winds and billowing smoke pulled four additional bodies overnight from the rubble of two Manhattan apartment buildings, as the death toll rose Thursday to at least eight from a gas leak-triggered explosion that reduced the area to a pile of smashed bricks, splinters and mangled metal.

The explosion Wednesday morning in East Harlem injured more than 60 people, with searchers still trying to locate others a day later. Mayor Bill de Blasio said Thursday that the city was “hoping to find others still alive” and then “to determine exactly what happened here.”

Earlier, he told firefighters at the scene, “I can only imagine knowing that at any moment you might find a body, how difficult that is.”

Edward Kilduff, the Fire Department’s chief of department, said the amount of debris had been reduced to about 1 1/2 floors by Thursday morning. He said rescuers were concerned about the stability of a free-standing wall at the back of the scene.

Huge clouds of thick smoke swirled over Park Avenue and wafted through the neighborhood.

Workers initially were hampered from fully accessing the building space because of a sinkhole caused by a subsurface water main break. The weather also posed a challenge, with temperatures dropping into the 20s and rain falling overnight.

The fiery blast erupted around 15 minutes after a neighboring resident reported smelling gas, authorities said. The Con Edison utility said it immediately sent workers to check out the report, but they didn’t arrive until it was too late.

Fire Commissioner Salvatore Cassano and Con Edison CEO John McAvoy said that before that call, they had received no complaints in the last 30 days about a gas leak in the area. McAvoy added that the company received only two reports in three years of gas leaks at the two buildings leveled, one on May 17, 2013, the other on Jan. 26, 2011.

At least three of the injured were children; one, a 15-year-old boy, was reported in critical condition Thursday with burns, broken bones and internal injuries. A woman was in critical condition with a head injury. Most of the other victims’ injuries were minor and included cuts and scrapes.

Noting that the area was home to many illegal immigrants, de Blasio said Thursday that anyone impacted by the blast will be helped “regardless of immigration status,” and that no one should be afraid to ask for help.

Con Ed said it remains to be seen whether the leak was in a company main or in customer-installed inside plumbing. The gas main that serves the area was made of plastic and cast iron, and the iron dated to 1887, Foppiano said.

“Age is not in and of itself an issue with cast iron,” he said, noting that Con Edison has a cast iron replacement program and the pipe was not slated to be removed in the next three-year period.

A National Transportation Safety Board team arrived in the evening to investigate how Con Edison handles reports of gas odors and issues with the pipe, and would be constructing a timeline of events. The agency investigates pipeline accidents in addition to transportation disasters.