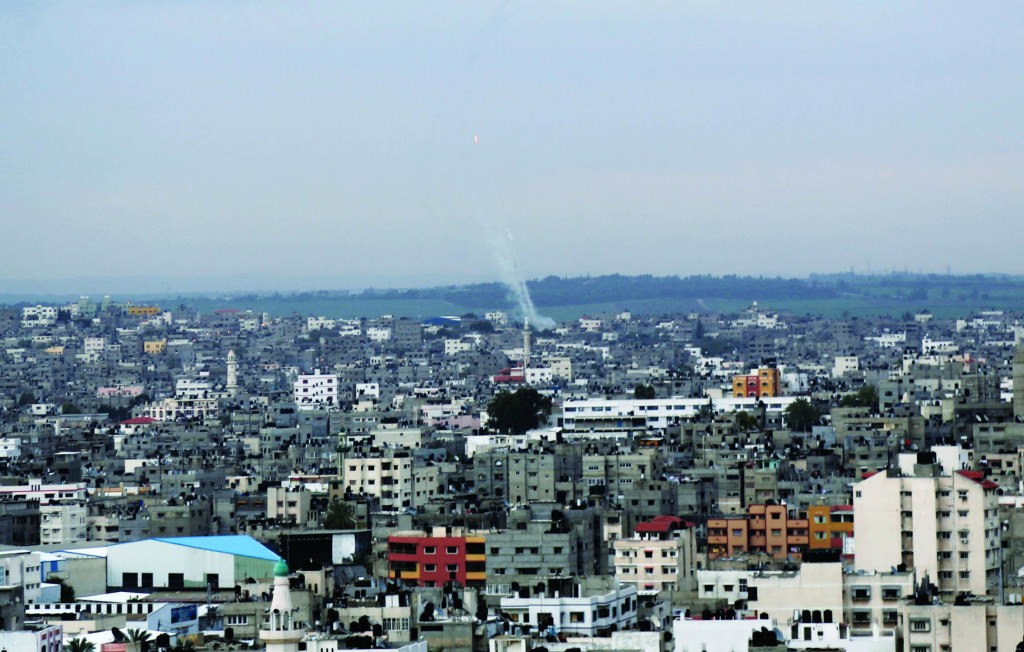 Rocket attacks on southern Israel from terrorists in Gaza and retaliation from the IDF went into a second day on Thursday, while Egypt attempted to arrange a ceasefire.

The Israel Air Force struck seven terror targets in the southern Gaza Strip on Thursday afternoon following the two rockets fired at Ashkelon and Ashdod on Thursday morning. The projectiles landed in open areas, causing no injuries or damage.

“It’s a [rocket] barrage such as we haven’t seen for two years,” Haim Yellin, an Israeli municipal official in the south, told Army
Radio, referring to Operation Pillar of Defense in November 2012.

In light of the situation, Ashdod Municipality decided to send students home from those schools which lack proper protective shelters.

At least one rocket fired at Ashkelon was interceped by the Iron Dome missile defense system, the IDF confirmed.

Once again, a visiting foreign dignitary was given a close-up view of Israel’s security concerns, as UK Prime Minister David Cameron was with Israeli Prime Minister Binyamin Netanyahu just as air raid sirens sounded in Yavne, Rehovot, Ashdod and Ashkelon on Thursday morning.

Netanyahu commented to Cameron: “At a time when the Teva plant in Ashdod is producing medicines that will be delivered to Gaza, they are firing rockets from there at innocent Israelis. So how can anybody not condemn the firing of these missiles deliberately at civilians? Precisely. Well, you’re going to see President Abbas soon, only a few minutes away, and unfortunately he didn’t condemn the rocketing of our civilians. He condemned the fact that Israel interdicted and hit the three terrorists who fired mortars on us. That he did condemn. And that’s wrong. I say we want to move to a genuine peace. To move to a genuine peace, we have to be very clear on our condemnation of terror and our support for the right to defend ourselves against terror. That is a crucial component of peace.”

Later in the day, during Cameron’s visit with Palestinian Authority President Mahmoud Abbas in Beit Lechem, the latter condemned the violence, on both sides, in his manner.

“We condemn all military escalation, including rockets,” he said, according to AFP.

But he reserved the harsher rhetoric for the deaths of three Islamic Jihad members in Gaza on Tuesday, accusing Israel of killing them in “cold blood.”

U.N. Secretary-General Ban Ki-moon on Wednesday issued a condemnation of the attack:
“The Secretary-General strongly condemns the multiple rocket attacks today on Israel from Gaza, for which Islamic Jihad has claimed responsibility,” Ban’s press office said in a statement.

In Washington on Wednesday, the State Department called for an immediate halt to the rocket attacks and said Israel had a right to defend itself.

A Palestinian official said that Egypt, which has in the past mediated between Israel and the terrorists in Gaza, had stepped in.

“Egyptian officials have made contacts with both sides to restore calm,” said the official, with direct knowledge of the talks.

A statement from Islamic Jihad saying it had agreed to a ceasefire notwithstanding, the situation remained volatile as of Thursday evening. Sporadic rocket fire from Gaza was reported hours after the terrorist group’s statement, increasing the total number of rockets launched against Israel since Wednesday to about 70.

Late in the day, the air force command called up a number of reservists, The Jerusalem Post reported.

Despite the threat to public safety, business life in the south carried on. The Manufacturers Association of Israel’s Southern Branch said that operations in factories and enterprises in the area were unaffected by the rocket fire from the Gaza Strip. It said that there was no change in the turnout of employees and that production was not interrupted, Globes reported.