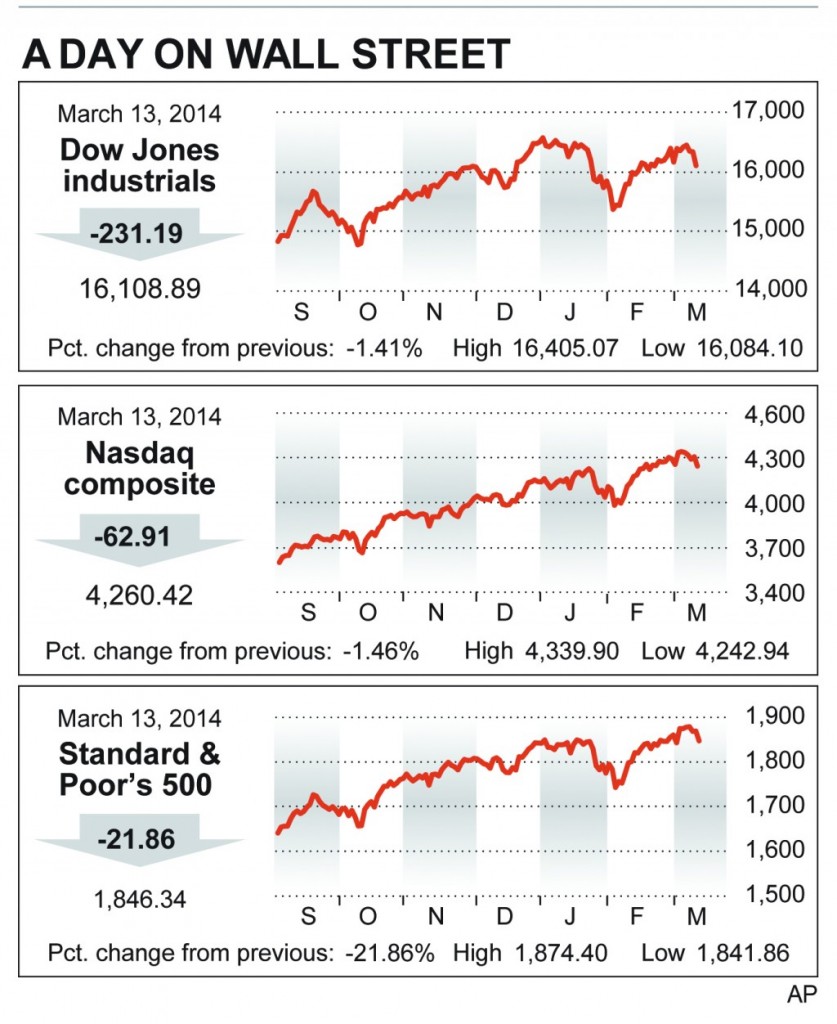 The pullback came as investors reacted to discouraging economic reports from China and intensifying tensions in Ukraine.

It was the worst day for the market in six weeks and the fourth loss in a row for the Dow. The plunge was a sharp contrast to the relatively quiet trading earlier in the week following a record-setting run last week.

“The data out of China has been weak. The retail sector in America seems to be a total disaster. It’s enough, combined with what’s going on in Ukraine, to get people a little bit nervous and sell,” said Ian Winer, director of trading at Wedbush Securities.

Thursday’s slide erased the S&P 500 index’s gains for the year and extended the Dow’s year-to-date loss to 2.8 percent. The Nasdaq is still up 2 percent so far this year.

Stocks that fell outnumbered those that rose more than two to one.

Bond prices rose as traders sought safety. The yield on the 10-year Treasury note declined to 2.65 percent from 2.73 percent a day earlier as bond prices rose.

Nine of the 10 sectors in the S&P 500 index fell. Information technology lost the most. Utilities bucked the trend, rising 0.9 percent. Investors tend to buy those stocks when they want to reduce risk and hold stable companies that pay steady dividends.

Concerns over China worsened Thursday after government figures there showed industrial production rose in the first two months of the year at a rate that was lower than analysts were expecting. Retail sales growth also fell short of estimates.

The market jitters intensified later in the morning, when President Barack Obama issued remarks after meeting with Ukraine’s new prime minister at the White House.

Obama said that if Russia continues an aggressive path in Ukraine, the United States and other countries will be “forced to apply costs” to Moscow.

Citizens in the Ukrainian region of Crimea are set to vote on joining Russia on Sunday. The U.S. and European Union say the referendum violates Ukraine’s constitution and international law. Russia has said it will respect the results.

Investors received some encouraging news on the U.S. employment picture.

The government reported that applications for unemployment benefits dropped 9,000 last week to 315,000. Applications are a rough proxy for layoffs. The declines indicate companies are confident enough about the economy to keep their staffs.

Spending had fallen 0.6 percent in January. The increase suggests that spending has started to recover after being tempered by snowstorms and freezing temperatures that blanketed much of the country.

Among the stocks that posted gains was Plug Power Inc. The alternative energy company reported revenue jumped to $8 million as it lined up some big clients.