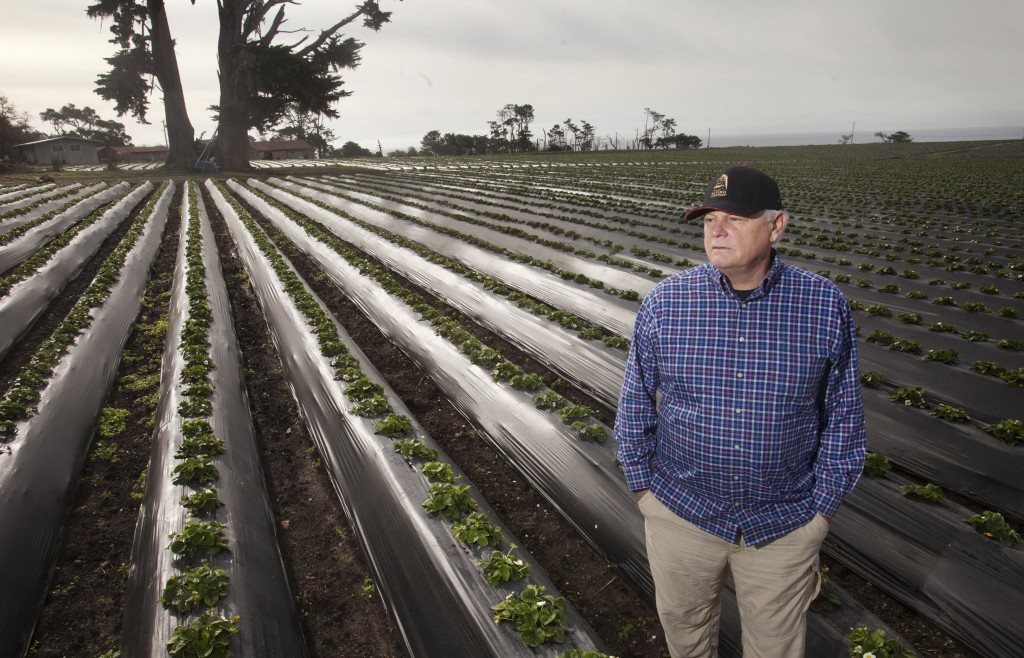 With 2013 the driest year on record and 2014 possibly worse, the devastation of California’s drought is trickling down to crops, fields, farmers’ markets, grocery stores – and the kitchen table.

While it’s too early to tell precisely how much the drought will push up household grocery bills, economists say consumers can expect to pay more for food later this year, because fewer acres of land are being planted and crop yields are shrinking.

Large grocery chains have distribution networks and can import produce – from cantaloupe to cauliflower – from around the world, but experts say California’s smaller yields will inevitably lead to higher consumer prices there and elsewhere. Some consumers already are plotting ways to keep their food budgets under control if there is a big spike in prices.

“The first thing I would cut back on is eating meat,” retired schoolteacher Sharon Jay, 66, said as she shopped for pears and asparagus at a Safeway in Oakland, California. “And I wouldn’t go out to eat very often. If food costs go up, restaurant meals will cost more, too.”

Kathy Jackson, CEO of the Second Harvest Food Bank of Santa Clara and San Mateo Counties, which distributes 52 million pounds of food each year to low-income California residents, says the drought could prove devastating to the people her organization serves. That’s because 27 million pounds of the food her organization hands out annually is fruits and vegetables donated by California farms and growers.

Many of the families Second Harvest serves live in “food deserts,” with no major retailers nearby, just corner stores. “Fresh produce is the most difficult food for our clients to both find and afford,” she said.

Jim Cochran, of Swanton Berry Farm in Davenport, California, offers a hint of what may come. He stopped watering his artichokes a month ago, and expects the cost of a pint of organic strawberries, which usually sell for $3.50 at San Francisco Bay Area farmers’ markets, to go up roughly 20 percent, to at least $4.20 a pint.

California is the nation’s largest producer of many fruits, vegetables and nuts. But with the traditional rainy season more than half over, farmers are making hard decisions about what crops to plant and how many acres to leave fallow. At least 500,000 prime acres, representing an area the size of Los Angeles and San Diego combined, are expected to go unplanted this spring because of insufficient water.

“We’re really concerned about the extent to which acreage is being taken out of action,” said Richard Volpe, an economist in the Foods Markets Branch of the U.S. Department of Agriculture. “The real economic impact is long term and will be felt down the road, when there will be a structural shift in prices.”

Dave Heylen, spokesman for the California Grocers Association – which represents 80 percent of the grocery stores in California, including large chains like Safeway and Trader Joe’s – said the reduced planting may result in a limited supply of particular produce at certain times of the year. But he declined to speculate on the exact impact the drought will have on food prices, noting that large retailers have global distribution systems that give them access to foods from other parts of the country and throughout the world.

“When I was growing up, when peach season was over, it was over; there were no more peaches,” Heylen said. “Now, you can get peaches from South America.”

While California’s drought may be good for growers elsewhere, the state’s farmers are feeling increasing stress. Last week, the federal government announced that it will not allocate any water to the Central Valley via the federally controlled Central Valley Project, California’s largest water delivery system. The Westlands Water District provides water to nearly 600 farms in western Fresno and Kings counties, and now has to contend with an allocation of zero. Roughly 200,000 acres of the 500,000 acres of land expected to be taken out of production this year fall within Westlands’ boundaries.

“Typically, there would be huge amounts of lettuces in the ground right now, and you are going to see lost production of lettuce,” said Gayle Holman of the Westlands Water District. “As we move further into the prime harvest season, consumers are not going to see as many California-grown honeydew, cantaloupes and watermelon… We imagine higher prices, higher demand and less availability. We need buckets of daily rainfall to even get us to the point of catching up to the worst-case scenario.”

Besides being the nation’s leading wine and dairy state, California produces 80 percent of the world’s almonds and is a major producer of strawberries, walnuts, celery, leaf lettuce, spinach and cattle. The $45 billion agriculture sector includes 2.6 million acres of permanent crops like almonds and grapes, which allow farmers less flexibility in tough times.

“There will be thousands of acres of fruit and nut trees that will die this year because of lack of water,” said David Sunding, a professor in the College of Natural Resources at the University of California-Berkeley. “The reduction in yield will drive up prices.”

But Mike Wade, executive director of the California Farm Water Coalition, said the precise impact on consumers is difficult to gauge, because other states and countries might increase production of the crops that California farmers cut back on.

“We’re not expecting to see much in terms of spring planting of peppers and melons,” said Wade. “But planting may be ramped up somewhere else. It could be grown in Arizona or Mexico.”