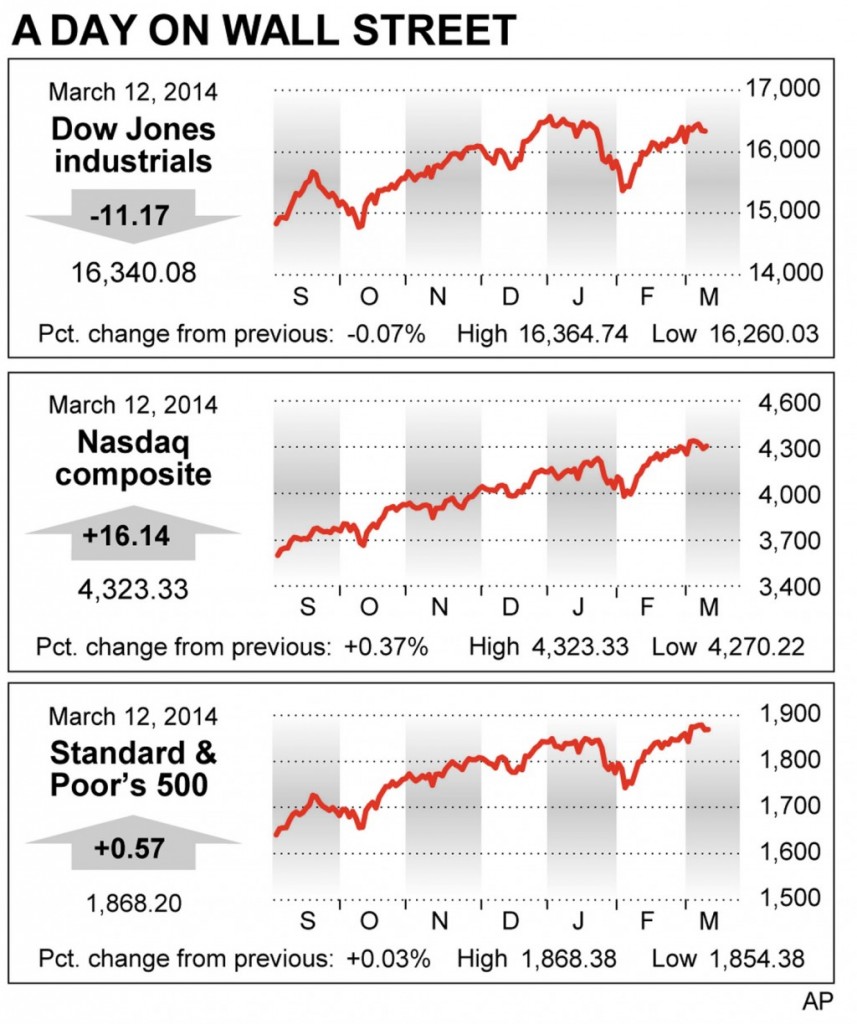 For much of Wednesday, the U.S. stock market appeared to be headed for its third decline in three days.

By late afternoon, the market began to slowly pare its losses as investors bought up oil refiners, mining companies and technology stocks.

The push was enough to nudge the Standard & Poor’s 500 index into the green by half a point. The tech-heavy Nasdaq composite also finished higher.

The three major U.S. stock indexes are still down for the week. Stocks had a strong finish last week, setting three record highs.

Investors have been worried this week about a sharp drop in China’s exports in February reported over the weekend, which raised concerns that the world’s second-largest economy is slowing. Since China is a big consumer of raw materials and energy, commodities such as copper and iron ore have dropped sharply. Copper has fallen to its lowest level since 2010, but recovered somewhat Wednesday.

“When markets reach these kind of new highs very often they have to digest those gains, which is what they’re doing,” said Quincy Krosby, a market strategist with Prudential Financial. “They need to adjust the gains and then wait for the next catalyst to move higher.”

That could come Thursday, when new data on retail sales and weekly unemployment benefit applications are released. On Friday, a survey of consumer confidence should give traders a better sense of how Americans feel about the economy.

The state of China’s economy is sure to continue to be a focus, however.

Six of the 10 industry sectors in the S&P 500 index notched small declines, with industrials posting the biggest drop. Utilities paced other gainers, as investors moved money into the relatively low-risk sector.

Most of the publicly traded homebuilding companies were trading lower after Credit Suisse issued a broad downgrade on the sector. In addition, new data from the Mortgage Bankers Association showed home loan applications fell 2.1 percent from a week earlier. Meritage Homes posted the biggest drop among the decliners, shedding 85 cents, or 2 percent, to $44.21.

Herbalife fell $4.82, or 7.4 percent, to $60.57 after the nutrition and supplement maker disclosed that it is facing an inquiry from the Federal Trade Commission. The company made the announcement a day after hedge fund manager William Ackman renewed his attacks on the company. Ackman repeatedly has bet against the company and says he believes it operates as a pyramid scheme.