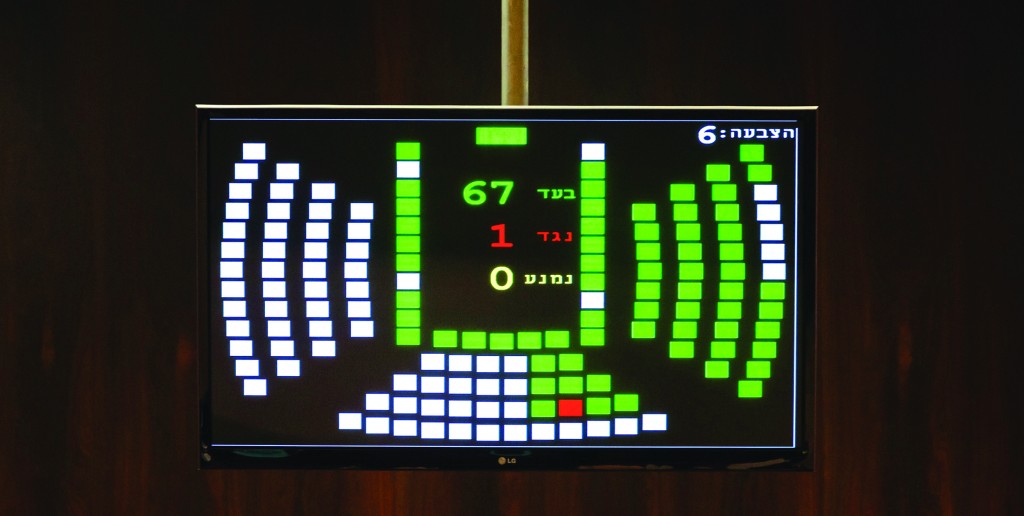 Long months of political wrangling and incitement reached their culmination on Wednesday as the opponents of the Torah world achieved their goal of passing a law to draft chareidim into the army.

By a vote of 67 to 1, with the opposition factions boycotting the proceedings, the Knesset brought about what was, in the words of United Torah Judaism MK Rabbi Moshe Gafni, “a black day for the state of Israel.”

The decision effectively tears up the status quo arrangement which from the founding of the state provided exemption from military service for full-time yeshiva and kollel students.

The Gedolei Yisrael have said that they will convene to decide on a specific course of action in response.

“The change begins tomorrow morning and it is expected to transform the face of Israeli society unrecognizably,” declared Yaakov Peri (Yesh Atid), a key advocate of the new law.

If so, the question is whether that transformation will be for better or for worse.

“The state of Israel has lost the right to call itself a Jewish and democratic state,” asserted Rabbi Gafni. “The chareidi public will not forget or forgive the prime minister and his partners.” He called it “an outrage against the lomdei Torah that no other country in the world would perpetrate.”

UTJ MK Rabbi Yaakov Litzman denounced the vote, saying that “ … it will be remembered in infamy for the lifting of their hands against the Torah world and turning lomdei Torah into criminals who are threatened with jail.”

Although Yair Lapid and his ally Naftali Bennett were the most high-profile backers of the law, and both proclaimed their triumph on Wednesday, Rabbi Litzman pointed the accusing finger at Israeli Prime Minister Binyamin Netanyahu.

“The prime minister is directly responsible for abandoning the chareidim and harming the their standing and the right of every Jew to learn Torah.” But he was unsparing for the Jewish Home party, whose partnership in this deed will be for them “an everlasting shame.”

“We are promised that this Torah will not be changed. The Jewish world witnessed the power of Torah at the historic mass rally just days ago in Yerushalayim. The chareidi public is united under the leadership of the Gedolei Torah, shlita. The yeshivah students will not be enlisted; they will continue to sit in the tents of Torah without concern for any sanctions.”

For his part, Netanyahu put on a poker face, maintaining that he was only complying with a High Court ruling. “This bill was demanded from us by a court decision. Two years ago, we said we’d pass a new law,” he said.

Although criminal sanctions on yeshivah students who refuse to go into the army will not go into effect until 2017, economic penalties are set to be activated much sooner.

A so-called “period of adjustment” between now and 2017 is not as benign as it sounds. The law imposes funding reductions during that period for institutions whose students refuse service, in the event that the eligible chareidi population as a whole does not meet interim enlistment quotas. Funding withheld from those institutions will be transferred to those that encourage army enlistment, such as the religious-Zionist hesder yeshivos, which already receive five times as much for each student.

Under the law, the army would be required to draft an increasing number of chareidim each year, with the goal of enlisting 5,200 — roughly 60 percent of those of draft age — by mid-2017.

Chareidim age 22-28 as of today will not have to enlist in the IDF, and will not face sanctions. They will, however, be required to attend army-sponsored lectures aimed at persuading them to leave their Torah studies to either join the military, civilian service or enter the workforce. The IDF is reportedly already making preparations for such indoctrination. In addition, anybody above the age of 22 will lose yeshivah or kollel funding altogether.

Those in the 18-21 bracket will also be given the option of deferring military service, on condition they submit a letter from the Rosh Yeshivah attesting to their full-time enrollment in yeshivah. Falsification of such a document will face criminal prosecution. This group must also participate in the abovementioned course to entice them into the army.

Yeshivah students who are as of today under the age of 18 will also be able to obtain deferments on a yearly basis, until the age of 21. After that, if the chareidi enlistment quota is not met, they will be eligible to be drafted at the age of 18. Should they refuse, they will be categorized as “deserters” and subject to a prison sentence of up to two years. Only 1,800 so-called masmidim, exceptionally diligent students, in this age group will be exempt.

The single vote cast against the draft law on Wednesday came, as promised, from Jewish Home MK Yoni Chetboun, who said that he could not in good conscience support the anti-chareidi legislation.

Chetboun said that he decided to take a stand against the coalition because as time went on he became increasingly concerned that if passed into law, the bill would cause “a very serious breach with the Torah world and the chareidi public.”

“The message that goes out from this bill is against the Torah world,” he said, adding that that concerns him more than the specific provisions in the bill.

“Yesh Atid has initiated a wave of anti-chareidi legislation to harm the chareidi community, and this bill is part of that. I have decided today not to play into that,” Chetboun said.

The party immediately disciplined Chetboun, revoking his position on the Foreign Affairs and Defense Committee, and suspended him from submitting bills for six weeks in the next Knesset session.

Another MK from Jewish Home, Motti Yogev, expressed misgivings but wavered, and in the end voted for it.

“I voted for the law with a finger of my left hand and with great pain,” he said.

He argued that the law did not achieve an “equal sharing of the burden,” noting that most of the Yesh Atid MKs, who had pushed through the law, had served in non-combat roles, in IDF units that involve music, sport and communications. “There’s no burden here, and equality is fiction,” said Yogev, who served as a commander of an elite infantry reconnaissance unit.

Yogev blamed his own party, saying the law was forced through “with the cooperation of those who, as it were, represent the Jewish Home.”

“I voted ‘yes’ because my party forced discipline, and out of a sense of responsibility. I respect my party members and the desire to keep unity in the religious Zionist public,” Yogev said.

MK Ayelet Shaked (Jewish Home), who chaired the committee which finalized the bill, and who had given her chareidi Knesset colleagues the impression that she was opposed to criminal sanctions, in the end voted for them, both in committee and in the plenum. On Wednesday, she made her final views known:

“This is a historic, important bill,” she declared. “For 65 years there was an exemption for all yeshivah students and the change the coalition made is proportionate and gradual and correct.”

Meanwhile, the High Court rejected a motion against the Enlistment Law that was filed by the Equal Burden Forum, an NGO that demands that all citizens share equally in mandatory military and civilian national service. The petition contends that the law “does not improve upon the Tal Law, which was canceled, but in fact makes inequality greater.”

MK Shaked said in response: “I hope that the High Court judges read the protocols of the committee’s deliberations. They will see that even if the law is not egalitarian … it is for a worthy cause.”