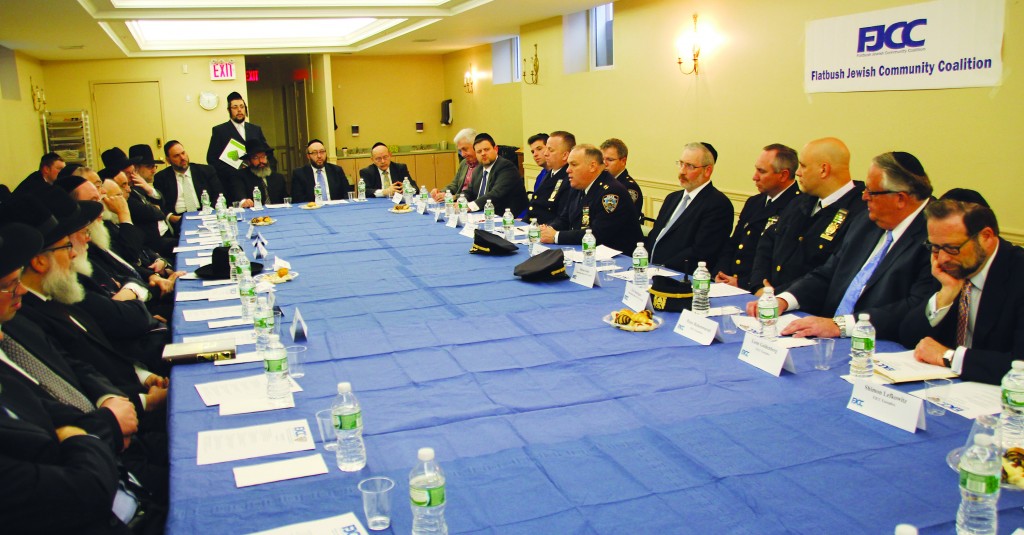 The entire police brass of precincts in Flatbush met Tuesday with a group of about 30 yeshivah and girls school administrators to hear security concerns and reassure that security for the Orthodox community is constant.

The meeting, organized by the Flatbush Jewish Community Coalition, was billed as the first of its kind. Both sides said they enjoyed the opportunity and would do it on an ongoing basis.

“Feedback from both police and the administrators was extremely positive,” FJCC founder Josh Mehlman said in a statement to Hamodia. “This was a very productive meeting, and historic in the sense that so many yeshivah leaders came together. There is strength in unity.”

Chaired by Mehlman, the NYPD was represented by Assistant Chief Owen Monaghan, Brooklyn South’s top cop, as well as the commanding officers of the four precincts that share jurisdiction in Flatbush. These are Capt. John Chell of the 61st, Deputy Inspector John Rowell of the 63rd, Deputy Inspector Michael Deddo of the 66th and Capt. Anthony Sanservino of the 70th.

Monaghan said that although people may not notice, police are constantly patrolling the area.