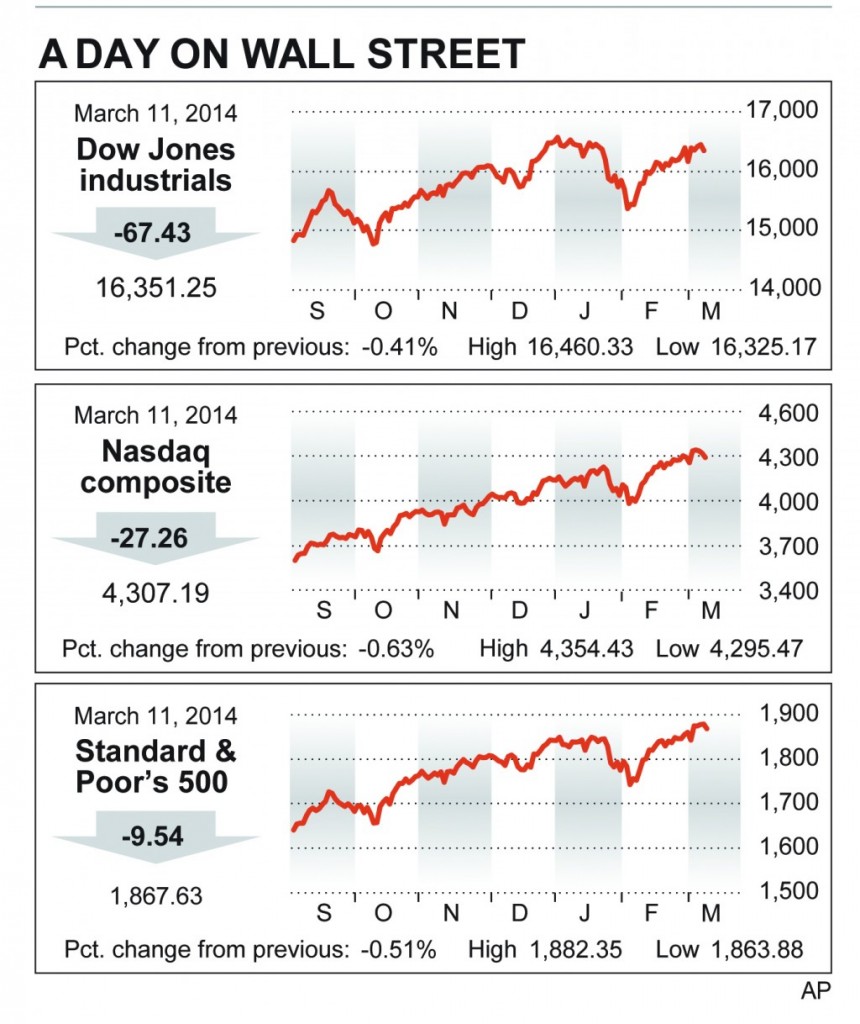 Without any big economic news or blowout company earnings to respond to, investors found little to get excited about Tuesday and sent the stock market lower for the second day in a row.

A few companies grabbed headlines for posting poor quarterly results or finalizing long-running merger talks Tuesday. The broader market barely budged for much of the day, then closed slightly lower. Investors didn’t see enough that they liked to drive up a market that hit three record highs last week.

“It’s a market that is looking for some direction overall,” said J.J. Kinahan, chief strategist with TD Ameritrade. “We’ve had such a nice run, I think you’re seeing people take some profits.”

The S&P 500 and the Nasdaq are both up for the year, though they lost some ground from the start of the week. The S&P 500 is up 1 percent, while the Nasdaq is up 3.1 percent. The Dow is down 1.4 percent so far this year.

General Motors, Men’s Wearhouse and American Eagle Outfitters were among the stocks in focus Tuesday.

GM dropped $1.91, or 5.1 percent, to $35.18 on news that a congressional committee is investigating the way the automaker and a federal safety agency handled a deadly ignition switch problem in compact cars.

American Eagle tumbled $1.11, or 7.8 percent, to $13.10 after the store chain issued a fiscal first-quarter outlook that fell short of Wall Street’s expectations. The company also reported an 89 percent slide in its fourth-quarter net income as winter storms weighed on sales. Urban Outfitters fell $1.60, or 4.3 percent, to $35.91 after reporting its own results.

The declines were broad. Nine of the 10 sectors in the S&P 500 index fell, led by energy stocks. The one sector that rose, consumer staples, eked out a gain of just 0.01 percent. Stocks of those companies, which make consumer staple goods like soft drinks and detergents, tend to be in favor when investors are feeling cautious and want low-risk investments that produce steady income. Among consumer staples companies, PepsiCo rose $1.08, or 1.3 percent, to $82.81.

McDonald’s had the biggest gain among companies in the S&P 500 index, rising $3.58, or 3.8 percent, to $98.78. The stock is rebounding after slumping a day earlier. Some other companies also mounted comebacks.

J.C. Penney rose 25 cents, or 3 percent, to $8.67 after analysts at Citigroup upgraded the department store chain, praising the retailer’s efforts to recover from a botched overhaul that alienated longtime customers.

The Labor Department said Tuesday that employers posted 3.9 million job openings in January, up 1.5 percent from December, a sign that hiring should remain steady in coming months. However, the increase fell short of what was expected.

Investors are watching for any signs the job market is strengthening as they try to gauge how the Federal Reserve will manage its economic stimulus efforts. The central bank is expected to continue paring its bond purchases, which are aimed at keeping long-term loan rates low and encouraging borrowing and investing. But if economic data signal that the economy is weakening, the Fed could opt to keep the stimulus spigot open. The Fed holds its next policy meeting next week.