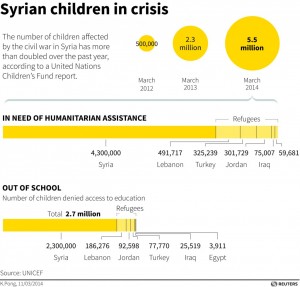 The number of Syrian children affected by the civil war in their homeland has doubled in the past year to at least 5.5 million — more than half the country’s children — with devastating effects on the health, education and psychological well-being of an entire generation, the United Nations children’s agency said Thursday.

The conflict, which enters its fourth year this month, has unleashed massive suffering across all segments of Syrian society, but the impact on children has been especially acute, according to a new report by UNICEF. Malnutrition and illness have stunted their growth; a lack of learning opportunities has derailed their education; and the bloody trauma of war has left deep psychological and physical scars.

“After three years of conflict and turmoil, Syria is now one of the most dangerous places on earth to be a child,” the agency said. “In the thousands, children have lost lives and limbs, along with virtually every aspect of their childhood. They have lost classrooms and teachers, brothers and sisters, friends, caregivers, homes and stability … Millions of young people risk becoming, in effect, a lost generation.”

UNICEF said that more than 10,000 children have been killed in the violence, which would translate into the highest casualty rates recorded in any recent conflict in the region. Of those who have survived, thousands have been wounded, lost their homes and schools, and seen family and friends killed. That trauma has left around 2 million children in need of psychological help, the agency said.

Almost 3 million children are displaced inside Syria, while another 1.2 million have fled the country and now live as refugees in camps and overwhelmed neighboring communities where clean water, food and other basic items are scarce.

On the education front, UNICEF said that nearly half of Syria’s school-age children  are not being educated.

On Tuesday, three suicide bombers blew themselves up in a local administration building in the Kurdish town of Qamishli in northeast Syria, killing at least five people, state media and a Kurdish official said.

The state news agency said the blasts at the Hadaya Hotel killed five, but a Kurdish official at the scene said at least seven people died, including four women.

This article appeared in print on page 3 of the March 12th, 2014 edition of Hamodia.