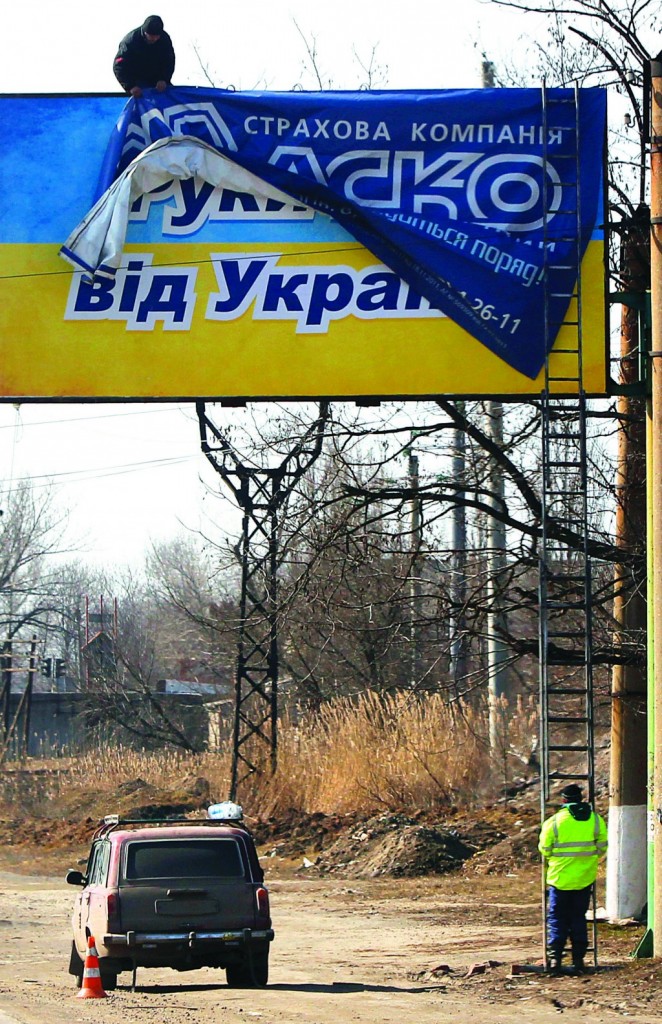 As the campaign increased for tension-filled Crimea to split off from Ukraine in a weekend referendum and join Russia, the region’s parliament said Tuesday that if voters approve the move it would first declare itself an independent state, a maneuver that could de-escalate the standoff between Moscow and the West.

The move would give Moscow the option of saying there is no need for Crimea to become part of Russia while keeping it firmly within its sphere of influence.

The dispute between Moscow and the West over Crimea is one of the most severe geopolitical crises in Europe since the end of the Cold War. Russian forces have secured control over the peninsula, but Ukraine’s government and Western nations have denounced the referendum as illegitimate and strongly warned Russia against trying to annex Crimea.

Backers of voting to split off from Ukraine in Sunday’s referendum say becoming part of Russia would return the Black Sea peninsula to its rightful home. Billboards around the regional capital proclaimed “Together with Russia” and street vendors were selling Russian flags to passing motorists.

But Russia’s absorbing Crimea would only worsen tensions with the West, and the parliament declaration could put the bid on hold, depending on the outcome of Russian President Vladimir Putin’s bargaining with the West.

In Sunday’s referendum, the public will be given two options: becoming part of Russia, or remaining in Ukraine with broader powers.

Crimea, where Russia maintains its Black Sea Fleet base, became the epicenter of tensions in Ukraine after President Viktor Yanukovych fled last month in the wake of months of protests and bloodshed.

Kiev-based political analyst Vadim Karasyov said the Crimean parliament’s move is “a message to the West that there is no talk about Russia incorporating Crimea.”

“It’s a tranquilizer for everybody — for the West and for many in Ukraine who are panicking,” he said.

Karasyov speculated that Crimea could exist as a “quasi-legitimate” state, while Russia and the West negotiate.

Russia’s Foreign Ministry later said in a statement that the Crimean parliament’s action was legitimate. “Russia will respect the results of Crimea’s referendum that will be monitored by” observers from the Organization for Security and Cooperation in Europe, the ministry said.

“From the Russian side, the necessity was underlined of taking into complete account the interests of all Ukrainians and all regions in the search for an exit from the crisis and also the respect of the right of the residents of Crimea to determine their fate on their own in accordance with the norms of international law,” the Russian Foreign Ministry said.

Kerry “conveyed that, as we often do, there is an off-ramp here,” State Departments spokeswoman Jen Psaki said. While Washington respects Russia’s interests, they “in no way justify military intervention or the use of force.”

Sergei Zheleznyak, a deputy speaker of the lower house of the Russian parliament, rejected proposals to draft new legislation to facilitate Crimea’s accession into Russia.

Zheleznyak wouldn’t elaborate, and it wasn’t clear whether his statement signaled the Kremlin’s willingness to relax tensions or was part of legal maneuvering over the annexation plans.

In a sign that some members of Putin’s entourage would prefer a negotiated solution to an all-out confrontation with the West, Konstantin Remchukov, the well-connected publisher and editor of the daily Nezavisimaya Gazeta, spoke strongly against annexing Crimea.

Remchukov, who avoids criticizing Putin, said on Ekho Moskvy radio that the move will trigger painful Western sanctions and cripple the Russian economy.

Remchukov said he believes Russia could negotiate a deal that would have the West guarantee the rights of Russian-speaking people and ensure its Black Sea Fleet’s continuing presence in Crimea.

Meanwhile, Ukraine’s acting president called for the formation of a national guard and for the mobilization of reserves and volunteers into the country’s armed forces.

Ukrainian Prime Minister Arseniy Yatsenyuk, who will fly to Washington to meet President Barack Obama on Wednesday, called on the West to defend Ukraine against a nation “that is armed to the teeth and that has nuclear weapons.”