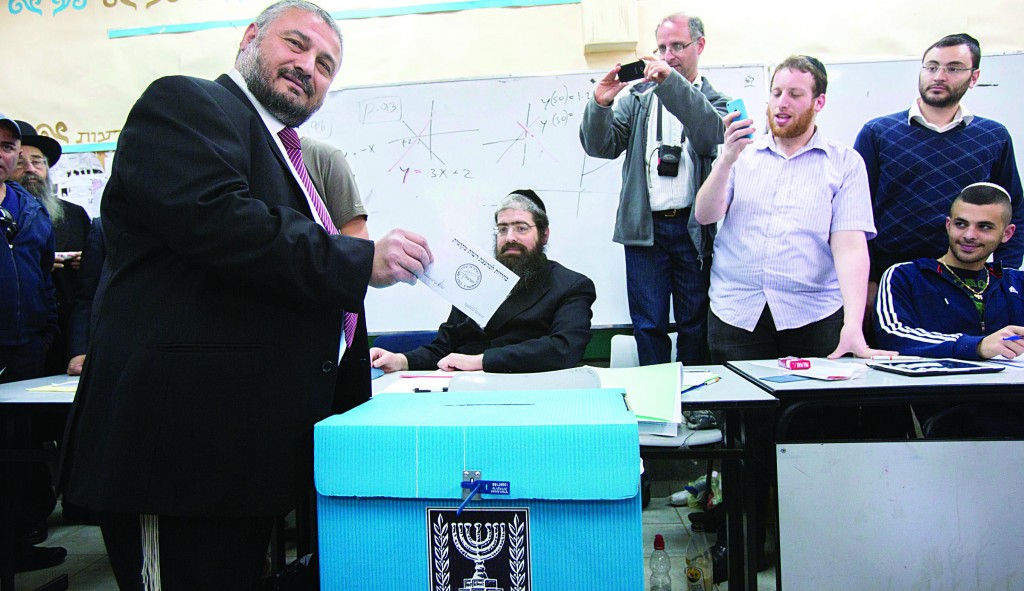 At the conclusion of a long, tense day of voting in Beit Shemesh, Mayor Moshe Abutbul won a decisive victory over his rival Eli Cohen. The city went to the polls to choose a mayor and city council for a second time, after the High Court disqualified the election results of the polls held in October due to allegations of fraud.

An all-out effort on both sides produced a high voter turnout: 76 percent of eligible voters came to cast their ballot, as opposed to 69.3% in October. A total of 38,500 votes were cast. Abutbul led with 19,190 or 51.3% to Cohen’s 18,230 votes, or 48.7%. The discrepancy is due to a number of votes being disqualified for both candidates for various reasons.

Abutbul’s victory of 960 votes is remarkably similar to his victory margin in October of 956 votes. However, both candidates gained votes because the overall turnout was higher.

In the city council, where there are 19 seats, chareidi parties won nine seats, as they did in October. Abutbul should be able to easily form a coalition even if the parties that supported Cohen decline to join, though he has pledged to invite all parties into his coalition.

Since ballots were being counted by hand — and with an unprecedentedly large contingent of polling station monitors, police and lawyers on hand, ostensibly to ensure an honest count — final results did not come in until 2:00 a.m.

By all estimates, it was regarded as a close race, as supporters of both the chareidi incumbent Moshe Abutbul and his challenger Eli Cohen contended that the election would determine the future of Beit Shemesh. National attention was focused on Beit Shemesh, a town that began as an immigrant transit camp, and until recently, was considered more of a suburb of Yerushalayim than a city in its own right. In the 1990s, an influx of chareidi families moved in to new neighborhoods in the city, and since then the city has grown to 100,000. Of those, half have the right to vote. The voting age is 17.

Hundreds of police officers were deployed around the city and in the vicinity of voting booths in order to preserve public order. The police were also assigned to escort the ballot boxes from the voting booths to the counting center.

There was a tense atmosphere as the voting went on. There were multiple complaints of harassment of chareidi voters by workers in polling stations. Many felt the police were siding with the Eli Cohen camp, often stopping the voting until they verified the voter’s ID card. No suspected forgeries were reported.

Mindful of the high emotions surrounding the election, Abutbul declared on Tuesday that “The most important thing is that Beit Shemesh residents treat each other with respect. We need to get through today peacefully. This is a critical day for us. I call on everyone to exercise restraint, and to show respect.

“It’s important that this not cause permanent scars [to the city],” he added.

At least that seemed to be a sentiment all could agree on. Economics Minister Naftali Bennett, who has invested an enormous amount of political capital backing Eli Cohen, said during a visit to the city yesterday that “tonight the polarization will end.”

Sources close to Abutbul expressed hope that Bennett will stand behind the statement even if the incumbent wins.

Virtually the entire country has been closely following the events in Beit Shemesh. At least one secular journalist expressed the view that a large measure of hypocrisy and bigotry were in evidence.

Haim Levinson, a reporter for Haaretz, charged that the campaign “to save Beit Shemesh” waged by Eli Cohen was a code word for anti-chareidi hatred.

For years the media completely ignored Beit Shemesh, and he charged it was hypocritical  to suddenly act as if they’re so concerned about what happens there.

“There are bigger cities in the country than Beit Shemesh, and nobody knows who the mayor is. Hand on heart, how many of you know the name of the mayor of Kfar Saba,” Levinson asked his online readers. “But in Beit Shemesh, the identity of the mayor has become symbolic.”

Levinson suggested that if people sincerely want to help Beit Shemesh, they have to address the real problems. “Neither Moshe Abutbul nor Eli Cohen will solve them without massive assistance from the central government. The road leading to the city is inadequate, one lane in each direction, overloaded with traffic lights and bisected by rail tracks. It has cried out for improvement for years.

“The industrial zone of the city is located in the adjacent Mateh Yehudah Council [depriving the municipality of revenue], and there is no room for expansion. Pinui-binui [a project whereby old apartments are demolished to make room for higher density construction] and employment is urgently needed. But these are boring subjects…”

Actually, the Abutbul administration, so maligned by its secular critics for favoring the chareidi sector, has already addressed the problems Levinson mentions.

Improvements on Highway 38, the road he refers to, was already given out in a tender by the Transportation Ministry thanks to the work of Abutbul and chareidi MKs; a rebuilding project in the city center of 1,500 apartments for secular residents was recently pushed through by Abutbul; and last year, with the help of then-Interior Minister Eli Yishai, 740 acres of industrial land was transferred to Beit Shemesh.