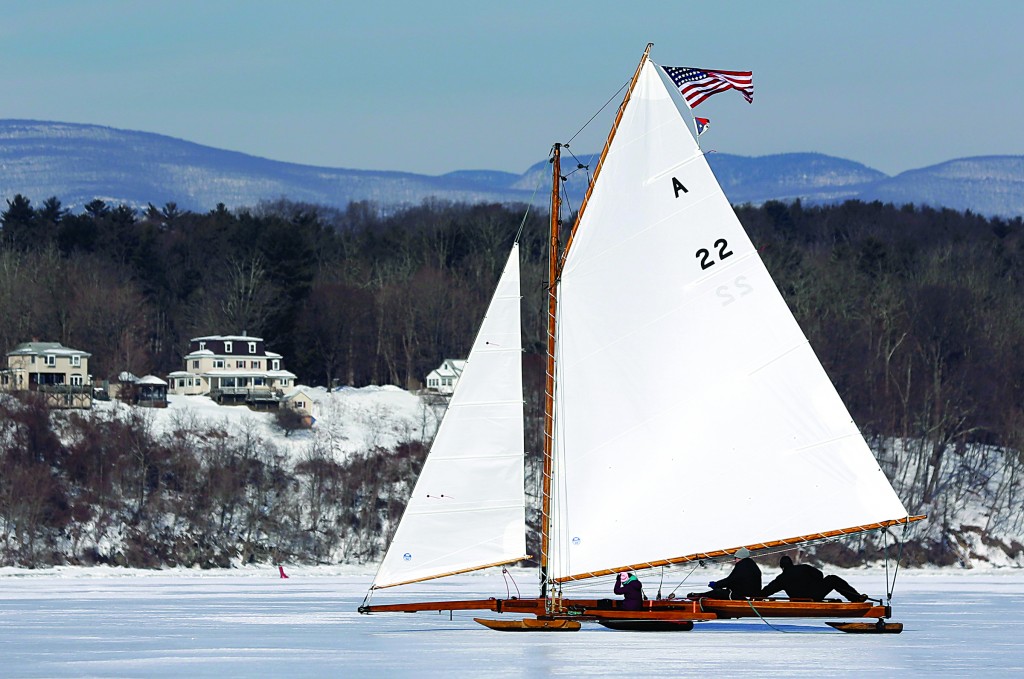 Sharp winds lashed up the Hudson River as sailors launched boats onto the ice. Sails whipped furiously as the long blades slid across a white sheet that spread for miles.

Finally, a frigid winter has created excellent conditions for ice sailing on the river.

“In the blink of an eye you can get up to 30 miles an hour … you can just feel the power of the wind filling the sails,” Michael Soldati said after a bracing run across the ice. “It’s just awesome. It’s just you and the wind.”

More than a dozen boats hit the ice last weekend on a wide stretch of river with a view of the Catskill Mountains. Many were one-person craft that skittered over the ice like so many puppies around two big dogs — the Rocket and Jack Frost. The two larger craft — each about 50 feet long — are reconditioned 19th-century ice yachts, made of heavy lumber and fitted with tall sails.

On the Jack Frost, which had not been out on the river for 11 years, Richard Lawrence sat low in the cushioned cockpit to operate the tiller, while his son Kevin urgently pulled in rope to trim the sails. Riding the ice at speeds of around 40 mph, father and son had to shout over the rushing wind and slicing blades.

In the early 1970s, Lawrence helped his father and other men recondition Jack Frost in nearby Newburgh. Now he shares the unique experience of local history and fast speeds with his son.

“The boats stay the same, the skippers get older, pass them down as they go,” Lawrence said between runs. “It’s just an exhilarating feel of harnessing the wind.”

The crews are keeping alive a tradition from the 19th century when winter days might bring thousands of people out to the ice at nearby Poughkeepsie to watch the ice boats race.

Even this winter was a bit of a tease. Early-season ice melted and a more recent hardening was accompanied by a nor’easter that dropped more than a foot of snow on top. A warm spell followed by a freeze polished up the wintry layer to late-winter perfection for ice sailing.

The ice sailors who last weekend navigated a 20-mile patch of sailable ice along the mid-Hudson were the rare Northeasterners who welcomed the polar vortex. The conditions were so promising that Soldati, who also does traditional sailing, said his group and others left their boats at Barrytown hoping for more good ice this weekend.

“I do a lot of soft-water sailing in the summer, and I think the exhilaration on the hard water, you can’t beat it,” Soldati said.