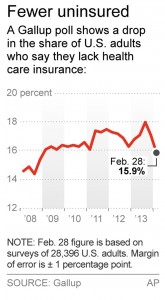 The share of Americans without health insurance is dropping to the lowest levels since President Barack Obama took office, but sign-ups under his health care law lag among Hispanics — a big pool of potential beneficiaries.

With just three weeks left to enroll on the new insurance exchanges, the Gallup-Healthways Well-Being Index, finds that 15.9 percent of U.S. adults are uninsured thus far in 2014, down from 17.1 percent for the last three months — or calendar quarter of 2013.

Released Monday, the survey based on more than 28,000 interviews is a major independent effort to track the health care rollout. The drop of 1.2 percentage points in the uninsured rate translates to about 3 million people gaining coverage.

Gallup said the proportion of Americans who are uninsured is on track to drop to the lowest quarterly level it measured since 2008, before Obama took office.

“It’s probably a reasonable hypothesis that the Affordable Care Act is having something to do with this drop,” said Frank Newport, Gallup’s editor-in-chief. “We saw a continuation of the trend we saw last month; it didn’t bounce back up.”

The survey found that almost every major demographic group made progress getting health insurance, although Hispanics lagged.

With the highest uninsured rate of any racial or ethnic group, Latinos were expected to be major beneficiaries of the new health care law. They are a relatively young population and many are on the lower rungs of the middle class, in jobs that don’t come with health insurance. They’ve also gone big for Obama in his two presidential campaigns.

But the administration’s outreach effort to Hispanics stumbled from the start. The Spanish-language enrollment website, CuidadodeSalud.gov, was delayed due to technical problems.

The Gallup poll is considered authoritative because it combines the scope and depth found in government surveys with the timeliness of media sampling. Pollsters interview 500 people a day, 350 days a year. The latest health care results were based on more than 28,000 interviews, or about 28 times as many as in a standard national poll.

This article appeared in print on page 3 of the March 11th, 2014 edition of Hamodia.