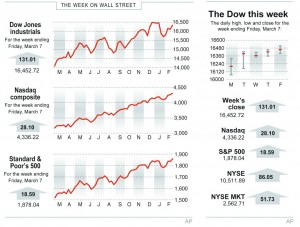 One positive report on the economy was not enough to make investors more confident.

The stock market ended mixed Friday after a day of muddled trading. Among the three main U.S. stock indexes, one edged higher, one closed little changed and the other closed lower.

Investors focused on the tensions in Ukraine, where the region of Crimea was preparing for a referendum on whether to split away and become part of Russia. It was enough of a reason to sell into the weekend and to offset optimism over a pickup in hiring by U.S. employers last month.

“People are hoping and praying that the recent slowness was weather-related, and while this report gave people a little bit of hope that is the case, it is still too early to tell,” said Krishna Memani, chief investment officer of OppenheimerFunds.

On the whole, the overall tone of the market was slightly negative. Three stocks fell for every two that rose on the New York Stock Exchange. Of the 10 industry sectors in the S&P 500 index, six fell.

Biotechnology and health- care stocks were among the biggest decliners. Biogen Idec fell roughly 4 percent and Amgen fell 2 percent. The Nasdaq composite index is more heavily weighted to biotechnology and specialty pharmaceutical companies, which is part of the reason the index fell even though the Dow and S&P 500 rose.

As they have for much of the week, investors turned their attention overseas.

Lawmakers in Russian-occupied Crimea unanimously declared they wanted to join Russia and would put the decision to voters in 10 days. President Barack Obama and several other Western leaders have condemned the referendum.

Ukraine’s economy is not large enough to cause serious damage to the global economy. But the geopolitical tensions that Russia’s occupation is creating between Russia, Europe, Ukraine and the U.S. could potentially be destabilizing for the region, investors say. In particular, trade between Europe and Russia could be severely impacted.

“Europe has a lot more to lose in these Russia-Ukraine tensions than the U.S.,” said Andres Garcia-Amaya, a global markets strategist with J.P. Morgan Assets Management.

The geopolitical tensions could flare up at any point, Garcia-Amaya said, giving investors fewer reasons to hold positions through the weekend.

This article appeared in print on page 14 of the March 10th, 2014 edition of Hamodia.