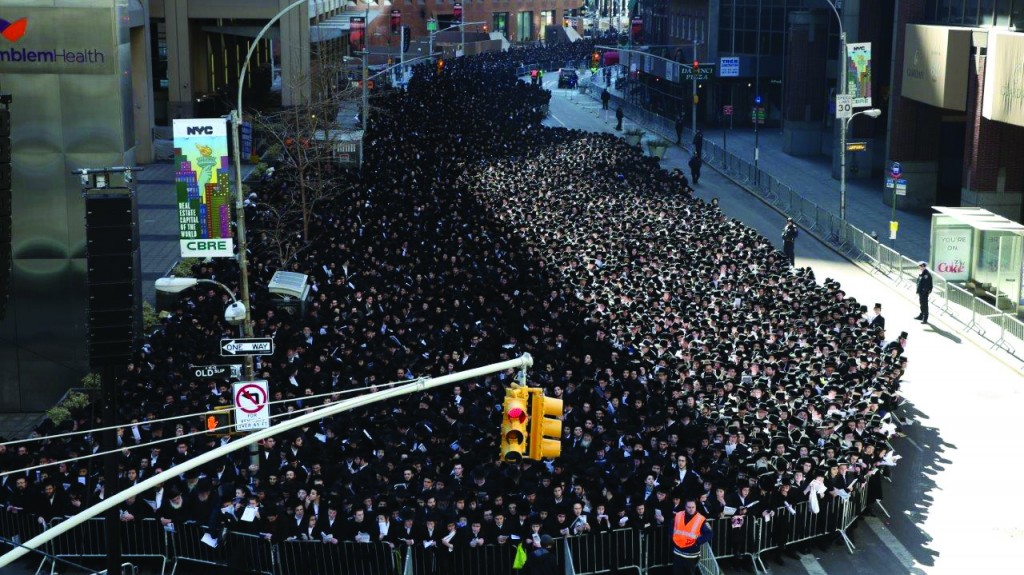 A crowd of tens of thousands of people came to Lower Manhattan Sunday and left two hours later — leaving behind an area of 15 blocks exactly the way they left it, with no trash or disorderly conducts to speak of, police officials told organizers.

“This was a very, very well-behaved crowd,” NYPD Deputy Chief James McNamara, who was in charge of security at the atzeres tefillah, told Misaskim head Yanky Meyer, who organized the security logistics. “Unusual.”

“I left at 4:30,” said ShaulE Wassertheil, the president of the ShaulE! Events & Marketing group which help coordinate the gathering, “there was no sign that there was an event there. There was no garbage whatsoever. [Sanitation] drove by here just now and they said that there was nothing here to clean.”

Estimates for how many showed up vary widely. Police told organizers that about 50,000 people filled the fifteen blocks on Water Street, from Wall Street on the west to the Brooklyn Bridge on the east, along with the side streets.

Other reports had the numbers at 70,000 to 80,000 — with some growing them to 100,000 or even 150,000 — people. But whatever the numbers were, they served to underscore the kiddush Hashem engendered at the rally called by the Gedolim of the United States at the request of their counterparts in Eretz Yisrael.

The statement read by Rabbi Chaim Dovid Zwiebel at the atzeres’s conclusion summarized the call of the day — which was for U.S. Jewry to show solidarity with their Orthodox brethren in Eretz Yisrael in their battle to preserve the integrity of the Torah world.

“B’siyatta diShmaya, we have been privileged in recent years to witness the flourishing of Torah study across the globe, and especially in Eretz Yisroel. In the aftermath of the destruction of European Jewry seventy years ago, when so many predicted the demise of Torah-true Judaism, we take pride and solace in this open manifestation of the Yad Hashem,” Rabbi Zwiebel said.

“We join in solidarity with the hundreds of thousands of Jews who gathered in the streets of Yerushalayim this past week to pour out their hearts in tefillah, and to express their anguish and protest regarding this proposed new law. Our dear brethren in Eretz Yisrael: Know that the Torah community in America stands with you in this difficult moment of challenge.”

If the underlying principle of the atzeres with solidarity with the Israeli Torah world, the theme of the atzeres in Manhattan, which drew groups from across the entire East Coast, was achdus.

There was no stage, but at a clearing set aside for the more than 60 Rabbanim, Admorim and Roshei Yeshivah, a cross section of Klal Yisrael was represented.

Tens of thousands of people came using mass transit, from across New York, New Jersey, Philadelphia, Baltimore and Boston. Hundreds of private cars choked the highways leading into Lower Manhattan from shortly after noon, and more than 1,000 people — including the Lakewood Roshei Yeshivah — came on three ferries from Lakewood.

More than 450 buses pulled up to the area, parked in three different locations set aside for them.

While mass transit worked flawlessly on the way into Manhattan, the return trip proved somewhat jumbled.

Seeking to get people out of the area as soon as possible after the event ended, organizers arranged to get the fares waived, reducing the amount of time spent turning the turnstile, and for the F train, which goes directly to Boro Park and Flatbush, to pass through the Fulton Ave. station two blocks from the atzeres.

But the F didn’t come until 45 minutes later. Several thousand people waited calmly throughout, passing the time by learning, schmoozing and the occasional song. One Lakewood bachur even had a guitar, which he strummed along to a song sung by a friend.

Other cities in North America, such as in Toronto, made their own atzeres tefillah in shuls at the same time.

“It worked like clockwork,” Mr. Meyer of Misaskim said.

There were 25,000 leaflets printed with Minchah and the pirkei Tehillim that would be said to be handed out. That, organizers felt, in addition with the request that everyone bring their own siddurim, would be sufficient.

The atzeres was designed to consist of only tefillos. At the end, there was some dancing in the street.

Preparations for the massive event began shortly after last Sunday’s atzeres in Yerushalayim, which brought more than a half-million people to the streets over a government bill to draft yeshivah bachurim.

The Gedolei Eretz Yisrael then requested that Yidden in the United States show their solidarity with their beleaguered Israeli brethren. That set off a weeklong scramble to find a central location, ensure that communities are notified and that security and services are provided for.

Credit for organizing the rally in less than a week goes to Agudath Israel of America, its vice president for finance and administration Rabbi Shlomo Gertzulin, Yanky Meyer of Misaskim, and Moshe Reichberg of the Boro Park Shomrim.

Bomb-sniffing dogs combed the entire area Sunday morning, 60 volunteer marshals from the combined Shomrim groups of Boro Park, Flatbush, Lakewood and Williamsburg, complemented the efforts of 450 cops from several local and federal agencies, and motorcycles squads were on standby as helicopters flew overhead.

Boom trucks were strategically placed to project audio across the vicinity. As the crowd was sprawled across 15 blocks, some audio projectors were higher than others, depending if the block was residential. That resulted in some sound coming later than others. So for a person standing between two projector segments, the echo would seem to last longer or begin earlier in one of them.

In the end, police told Mr. Meyer, everyone cooperated with police and law enforcement officials. There was not a single incident of disorderly conduct. While Hatzolah was called four times, only one person, an elderly man, needed to be hospitalized. He is doing fine.