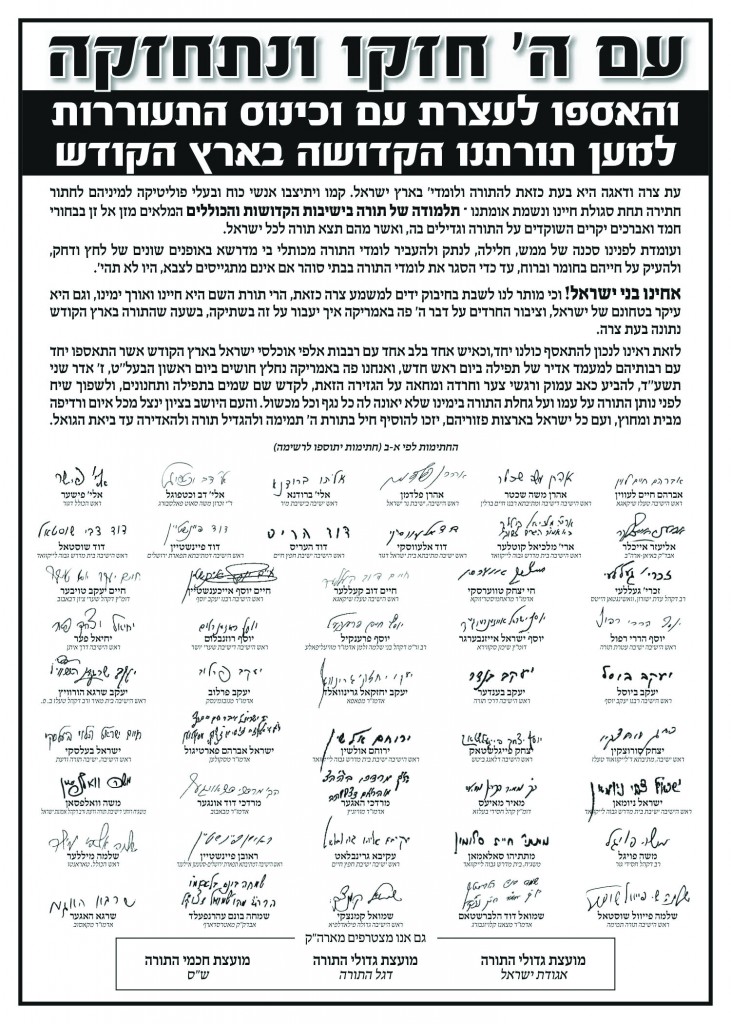 Why Pound the Streets of Manhattan for the Atzeres?

There has to be something that we all agree on. Sunday’s solidarity atzeres with the beleaguered Torah community in Eretz Yisrael, I believe, is the catalyst that all of us can unite around.

I have long felt that Jewish history is the most misunderstood subject, even among those who study it from a Torah prospective.

Quick, what does the war of the Chashmonaim and Churban Bayis Sheini have in common?

Answer: The Gedolim of those eras all looked at one single criterion when deciding which position to take — how it will affect the study of Torah.

So Shimon Hatzaddik and those coming after him accepted Greek dominion over Eretz Yisrael — until the Hellenists banned the Torah. That’s when the Chashmonaim took up their spears and lances to do battle with them — for the sake of Torah. It wasn’t a war of independence or a battle for freedom, it was a struggle to be allowed to learn.

When the Romans laid siege to Yerushalayim at the end of Bayis Sheini, Rabban Yochanan ben Zakkai, recognizing the primacy of the Torah in the age of galus, unsuccessfully tried to convince the Sikrikim to surrender. Losing sovereignty, or even the Beis Hamikdash, he said, was not as important as protecting the bnei yeshivah — or “Yavneh v’chachamehah.”

Now, it is our turn to gather round and express our empathy with the pain the bnei Torah in Eretz Yisrael are in. This is part of our obligation, both historically and morally.

The battle for Torah in Eretz Yisrael currently taking place is but one in a long series of chapters in the saga of the renewal of the Torah community after the war. While friendly governments or political arrangements have pushed off this moment until now, we take off now from where the Chazon Ish, the Brisker Rav and the Belzer Rebbe left off in the 1950s, the Beis Yisrael in the 1960s and ‘70s, Harav Elazar Shach in the 1980s and ‘90s, Harav Ovadia Yosef and the current Gedolim in recent years.

In the long arc through which the Jewish people view history, it is in that context that we must consider this atzeres.

Achdus. That term has been overused for so many causes. It is inarguable that the true meaning of it is not when people get together to agree, but when Jews declare they are one in following the commands of Hashem, as it is given over through the Gedolim of each generation.

The term Gadol is not one which should be thrown around lightly. We don’t elect them and they are not subject to polling and favorability ratings. And when such a broad consensus of Gedolim unite around a single concern, perhaps the biggest consensus around an issue in years — if this is not what the Torah meant by “ke’chol asher yorucha,” then what is?

We go to Eretz Yisrael for Yom Tov, we send our children to learn there, we vacation there, many of us have children or siblings living there — basically we rely on the yeshivos for the ambiance of Torah and spirituality to inspire our lives and influence the growth of our children.

That rarified atmosphere is in danger of ending. That which we took for granted, that the post-WWII renewal — a miraculous rebirth of the Torah world in ways unimagined — is imperiled.

Like I said, there has to be something that we all agree on. This is it.