Community How to Get There
Community 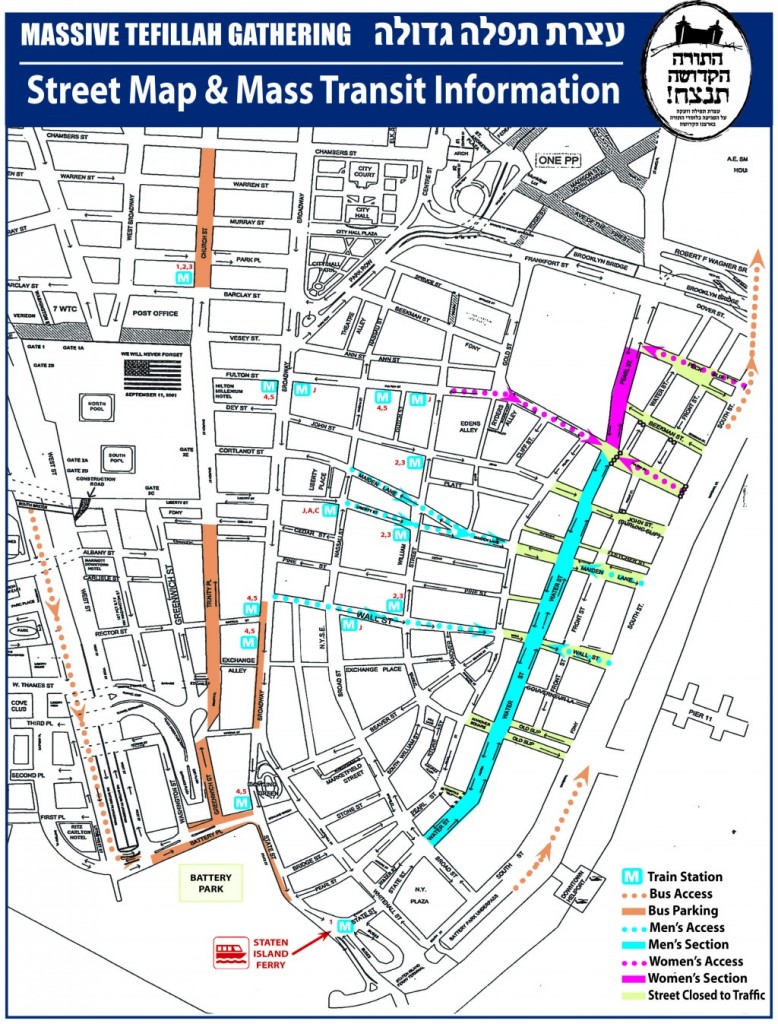 The atzeres tefillah Sunday in Lower Manhattan is near a large bank of train stations, centrally located for Brooklyn, Rockland and Lakewood participants and a relatively balmy weather.

A kol korei by the U.S. Gedolim urging participation in the atzeres was released Thursday, co-signed by the Israeli Moatzos of Agudas Yisrael, Degel HaTorah and Shas. The gathering, called by the U.S. Gedolim at the request of the Gedolim of Eretz Yisrael, will echo this past Sunday’s huge atzeres tefillah in Yerushalayim.

The gathering in Yerushalayim brought out hundreds of thousands of Jews in response to the Israeli government’s ongoing attempt at social engineering of the chareidi community, including wholesale conscription of bnei yeshivah.

The gathering will begin with Minchah and consist only of the recital of Tehillim and special tefillos. It is scheduled to begin at 2:00 p.m. and conclude approximately 90 minutes later.

Quite an extensive area on Water Street has been set aside for the atzeres, with massive street closures and a heavy ring of security.

The section designated for men is between Broad Street (located approximately one block from the Staten Island ferry) and Fulton Street. The section for women is from Fulton Street until Peck Slip, just south of the Brooklyn Bridge.

As organizers expect a large turnout, New York residents are urged to take public transportation to the site, which is well serviced by the subway system, and not to attempt to drive into Manhattan. For those who do drive, they should come through the Brooklyn Battery Tunnel (now known as the Hugh Carey tunnel) and park in the tunnel’s parking garage, which has several thousand parking spaces.

The tunnel will have all lanes open on Sunday, a departure from the usual weekend schedule.

Buses coming through the Battery Tunnel will be allowed to exit directly onto Trinity Place where parking will be made available for them. For other buses, they must approach the area of the atzeres through the West Side, where extensive bus areas have been set up. Police will direct buses to park in specific areas. No buses will be allowed through South Street or Broadway.

Rabbi Shlomo Gertzulin, who is organizing the event, praised the “tremendous cooperation” they received from the New York Police Department and other law enforcement agencies, and said the organizers held numerous meetings as well as on-site walkthroughs.

Organizers have also arranged for a large staff of marshals to help people; they will be identified by orange vests.

According to the police, they will not allow any signs or placards to be held aloft during the atzeres.

Rabbi Gertzulin said that it is important that passengers wait until their bus has been parked before alighting, in order to avoid the chaos that will result at the conclusion of the atzeres if passengers won’t know where their buses are.

The elderly and handicapped should carefully consider if they should come, both because of the weather, and since many streets will be closed and navigating through the area will be challenging.

For those outside the subway system, such as Lakewood and Monsey, buses will bring participants to the location. There are already plans for chartered buses from cities such as Baltimore, Philadelphia, upstate New York, Orange, Sullivan and Rockland counties, Lakewood, and other New Jersey communities.

A ferry was arranged from Lakewood, which will depart from Atlantic Highlands, about 35 minutes from the township, at 12:00 p.m., and will dock a short distance from the atzeres area. Tickets went for $50 apiece.

The podium where the shaliach tzibbur will stand will be on the corner of Water St. and Old Slip (midway between Broad Street and Wall Street). Massive sound trucks will be strategically placed throughout the vicinity to project audio of the proceedings.

The weather Sunday is predicted to be warmer than now. While attendees should dress warmly, Accuweather.com is forecasting that Manhattan will be 43 degrees with a real feel of 32 degrees.

A huge security presence will be in the area, with the NYPD conducting periodic sweeps prior to the event. Most major streets in the area will be closed to vehicular traffic and everyone will need to pass through a security check before being allowed in. Organizers ask that attendees not bring knapsacks, briefcases or packages in order to keep lines flowing.

Organizers request that all participants cooperate fully with demands by the NYPD, MTA and their own volunteers.

“We want to show police and the world that this is an orderly, respectable gathering,” Rabbi Gertzulin said.