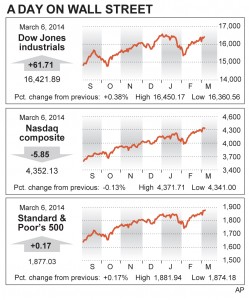 Investors were looking for any reason to look past the cold weather that has hampered the U.S. economy in the last few weeks, and they found it.

Stocks mostly rose Thursday, lifted by a report that showed the number of people who filed for unemployment benefits fell last week to the lowest level in three months. The gains were enough to give the Standard & Poor’s 500 index its third all-time high this week.

The report on unemployment claims was one of the first bits of good news investors have gotten on the economy after weeks of data that showed the U.S. recovery temporarily slowing because of the severe winter.

“Investors are putting more weight on the data that makes sense and ignoring the data that was impacted by the harsh winter weather,” said Kate Warne, a market strategist with Edward Jones.

Staples fell the most of any stock in the index after the office supply chain said it would close 10 percent of its stores. Nearly half of its sales are now generated online. The stock fell $2.05, or 15 percent, to $11.35.

Staples is the second major brick-and-mortar retailer this week to announce widespread closures. Two days ago, RadioShack said it would close as many as 1,100 locations as part of a restructuring effort.

The number of people who filed for unemployment benefits fell by 26,000 last week to 323,000, according to the Labor Department. That was far less than the 337,000 claims economists had expected, according to FactSet, and a sign that fewer people are being laid off.

Typically investors would not put much weight in the weekly unemployment report because the numbers can be volatile. But with the rest of the data they have at their disposal tainted by the weather, including Friday’s closely watched government jobs report, investors don’t have much to work with at the moment. The winter storms died down last week, so this data is the first “clean” reading on the economy.

The figures for weekly unemployment claims coming up over the next several weeks will be the freshest data investors will have, strategists said.

“We won’t get a clean reading on the economy until we get through this bad weather,” said Quincy Krosby, a market strategist at Prudential Financial.

Expectations for the February job numbers are low. Economists expect that employers added 145,000 jobs last month and that the unemployment rate held steady at 6.6 percent. Before the bad winter weather hit much of the country starting in December, the U.S. economy was creating around 225,000 jobs a month.

Outside the U.S., investors remained concerned about Ukraine, where tensions have been escalating over Russia’s deployment of troops to Ukraine’s Crimea Peninsula.

Moscow-backed Crimean officials said Thursday that the region would hold a referendum to decide whether it should be annexed by Russia. President Barack Obama declared that the referendum would violate international law.

This article appeared in print on page 10 of the March 7th, 2014 edition of Hamodia.