US Companies Spend Heavily on Big Mergers in 2014 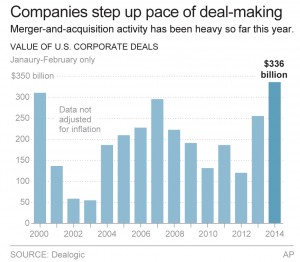 Flush with cash and high stock prices, companies are buying up the competition at levels not seen since the dotcom bubble. And with Washington providing more clarity on government spending plans, CEOs are more confident their expansion hopes will pan out — especially if the economy keeps growing.

Many of the acquisitions involve American businesses doing the buying or getting bought by overseas rivals. Global deals are up, as well.

Merger-and-acquisition executives say they have expected a pickup in deal activity for a couple of years, given the bull market and economic recovery. But what prevented the really big transactions was uncertainty about the federal budget, the debt ceiling and the fate of President Obama’s Affordable Care Act.

With those issues resolved — at least for now — the way has opened up for bigger, more complex deals.

“The deals we have seen in the last couple of weeks are that tipping point that we’ve been waiting for,” said Mark Walsh, who heads up the M&A practice at Deloitte, one of the world’s largest accounting and consulting firms. “There’s so much pent-up demand to do a deal now.”

U.S. companies announced $336.13 billion in deals in January and February, according to Dealogic. That’s up 31 percent from $256.21 billion during the same period last year. It’s the largest amount spent during the first two months of the year since 2000. Companies worldwide have announced $569 billion in deals so far this year, the highest level since before the financial crisis.

American companies announced 1,550 deals in the first two months of 2014, according to Dealogic. While that is down from the last two years, the average transaction size is more than double what it was a year ago.

The high prices reflect companies going on the offensive to boost their earnings. The economy, while growing, still isn’t booming. Since the end of the recession, companies have had to act defensively — protecting profits by cutting costs through layoffs or benefit reductions or by moving manufacturing elsewhere.

In an effort to lift earnings and please shareholders, S&P 500 companies have also announced plans for nearly $1 trillion in buybacks over the next several years, and more than four-fifths of them now issue a dividend, the highest proportion since 1998.

With their tool boxes nearly depleted, corporations “are looking for that extra bump” in sales now, Walsh said. A lot of Deloitte’s M&A business has been with companies “looking to expand their product lines or expand geographies.”

Buying Time Warner Cable gives Comcast roughly 30 million customers in markets such as New York City. For Facebook, WhatsApp is an opportunity to buy a fast-growing message service that is popular in emerging markets and Europe. Facebook CEO Mark Zuckerberg has said he expects WhatsApp, which currently has 400 million users, to grow to 1 billion users in the near future. Ireland-based Actavis gains both a broader variety of drugs to sell and a larger sales presence in the U.S. with its acquisition of Forest Labs.

Another example is Japanese liquor company Suntory Holdings, which in January said it would buy Beam Inc., the maker of Jim Beam and Maker’s Mark, for $14 billion. The deals will “allow us to achieve further global growth,” said Nobutada Saji, president and chairman of Suntory.

Getting into the whiskey business is next to impossible, said Thomas Mullarkey, an equity analyst at Morningstar. The popular liquor needs to be aged in barrels for years. While Suntory has a good niche market selling Japanese whiskey to the Japanese, it could never replicate or grow that business in the U.S.

“It’s faster and cheaper for Suntory to buy Beam,” he said.

Corporate finances are also strong. Companies have been hoarding cash on their balance sheets since the financial crisis, stashing away around $1.6 trillion, according to the Federal Reserve, and investors are increasingly demanding that companies figure out what to do with it. While investors like companies to keep cash on their balance sheets, having too much is like stuffing money into a mattress — it doesn’t do anything. Investors want to see money put to work, earning a return of some sort.

Companies are also able to do deals because financing is cheap.

Interest rates are still low. The yield on the 10-year U.S. Treasury note, which is a benchmark for many different types of loans, from mortgages to corporate debt, stands at around 2.6 percent. Investors are also eager to buy corporate bonds, which makes financing a deal historically cheap for companies.

For example, Verizon Communications was able to sell $47 billion in bonds in September, the largest corporate bond sale in history.

Companies are also able to use their stock, much of it trading at all-time highs, as currency. After a weak start to the year, the stock market snapped back in February and ended Tuesday at a record high.

Facebook is mostly using stock to purchase WhatsApp. Comcast’s proposed merger with Time Warner Cable is an all-stock deal, and Actavis is using a combination of stock and cash to buy Forest Labs.

The high prices reflect the strength of corporate balance sheets and the confidence of CEOs. That encourages more deals.

“A healthy M&A market ultimately represents a flourishing economy,” said Martyn Curragh, head of U.S. deals for PricewaterhouseCoopers. “Seeing a big deal come together successfully helps bring confidence to other companies who are possibly looking at doing a deal,” he said.

“I don’t think we’ve seen the floodgates open yet,” Walsh said, “but looking six, twelve months down the road, we’re definitely looking at a big increase.”